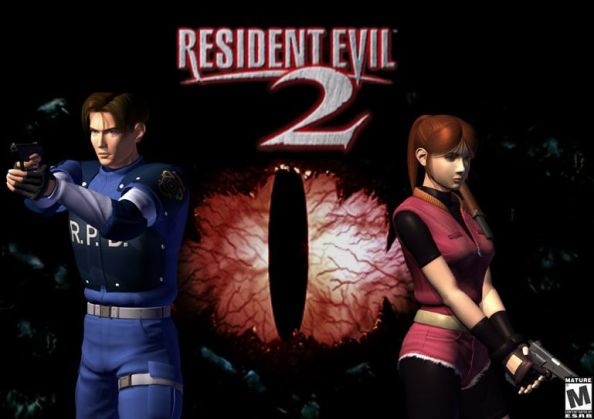 So…Birkin has an eye…in his shoulder. How does that work? Can he actually see out of his shoulder?

When I began this every-Resident-Evil project, I swear I honestly didn’t plan for it to line up this way! Still, while everyone is driving the sleek, new model of Resident Evil 2, complete with hybrid engine, GPS Navigation, MP3 Player, and back-seat jacuzzi, I’m still booting up my Playstation with a crank. Yeah, but following the pattern, I’ll do the remake next, right? Guess again, Kreskin! As a guy who devotes his time to retro games—and having started this blog after the announcement of the PS4—I still don’t have anything that can play the remake! But I’m working on it.

Actual photo of me trying to start my PS2.

I don’t like playing on easy mode. According to my ten-year-old save files, I didn’t the last time. But for whatever reason, I couldn’t make it to the police station. The point of Resident Evil has always been to conserve ammo and avoid monsters, but when the game throws an undead football team—including their mascot—at you in a corridor about as wide as your average toilet stall before the game’s first healing item, it’s hard to limp to the end without ending up like a communal pig roast. Easy mode makes the game condescendingly pointless. You still have over 40 zombies and a licker before it stops bogarting the herbs, but you get to walk around like you’re hoping to supply an NRA convention with ammo. 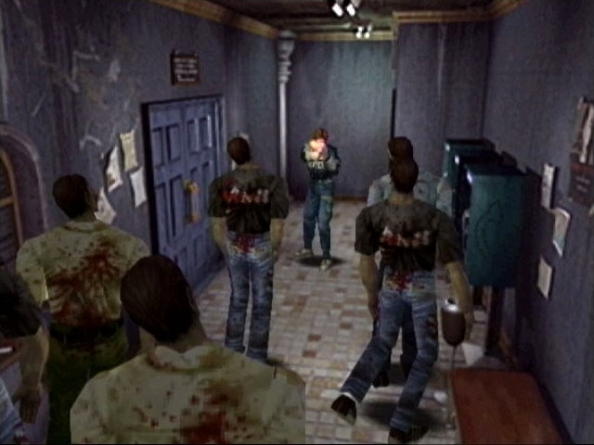 Oh, it’s simple. Just get by these six zombies with whatever’s left of the 30 bullets you started with and there’s an herb for you. Just nudge your way past them, right?

With four unique scenarios (that tell essentially the same story), Resident Evil 2 adds some interesting ideas to the series. There’s a surprising attention to detail. Claire carries her survival knife on her shoulder, but if you stash it in the item box—say, because it’s like fighting zombies with a toothpick—you can see that the sheath is empty. Although, since the knife takes up a precious spot in your inventory, I’d expect to see that sheath stuffed full of herbs or bullets or at least a grenade launcher. They also removed the auto-aim function . . . 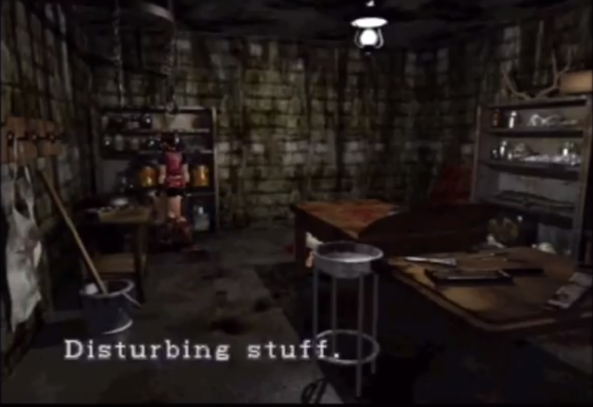 I know the writers are bad, but this is just downright lazy.

As usual, the writing is right up there with the likes of Shakespeare, Tolkien and the menu at McDonald’s. Leon chases around a hot Asian femme fatale that he just met in the worst unreciprocated crush since my junior year of high school, and Claire immediately drops her search for her brother to indulge her motherly instincts chasing around a ten-year-old girl. It always amused me how any random person wandering through the Umbrella labs could easily use scientific equipment, but RE2 tops all the other games by giving a ten-year-old a fluent knowledge of how to operate municipal water supply filtration plants.

As we’d see later in Resident Evil 3, this game introduces a giant terminator monster who chases you relentlessly throughout the map—unless, of course, you go through a door, in which case he’ll take a break for a little while. (Umbrella must be a deceptively progressive corporation if it allows its products to join their labor union.) You can stand and fight or prey on the eight-foot-tall monsters’ fear of messing up his snazzy bowler hat trying to fit through a door, or you can dump all your grenades into him until he passes out—it makes no difference. He’ll still be up and much healthier than he should be for a genetic freak literally powered by a virus. 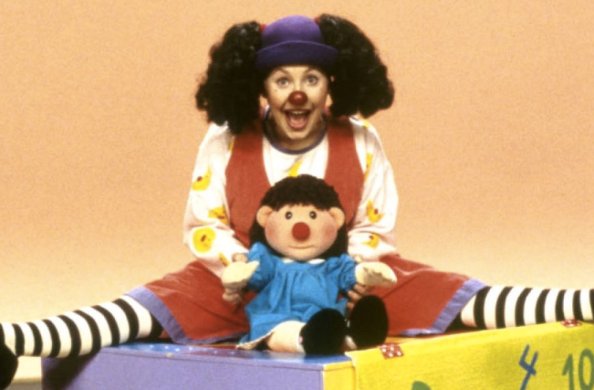 I might laugh at him for his inability to overcome the concept of a slab of wood with hinges, but every time you knock him down and rush off in search of the next shiny object, you pass up an excellent opportunity to saw off his head or set him on fire or something. Even worse is blasting the mad scientist a few times, then sitting back to watch him transform. Hey Leon, you know what might be a good idea? Taking down the giant, aggressive abomination while he’s currently undergoing a crippling physical transformation. (Ah, Dr. Birkin, I, too, had a difficult adolescence.) And it’s not just bosses! Silent Hill lets you go all American History X on the monsters, but in RE2, you can’t curb stomp them unless they start digging into you like a porterhouse steak.

Still, when one major boss shrugs off a terminator-style plunge into a vat of liquid steel like a lukewarm bubble bath, and another catches his second wind after a swift, heavy decomposition, it becomes clear that the primary symptom of the G-virus is a wicked case of plot-contingent immortality. Leon, Claire and the monster are all fine with pulling their punches until conditions are just right for a thrilling climactic showdown.

(How the hell did my rank fall?)