Police block off the roads…but apparently not because of the radioactive space rock. Hey kids, after you touch it, be sure to see what it tastes like!

Strap in tight, RPG fans, and grease up your frying pans to retaliate as I malign yet another classic game even though I honestly didn’t find it all that bad. I simply can’t help myself. Nowadays, as the indie game community struggles to understand that “off the wall,” while it may be profitable, only has a few degrees of superlative. I mean, when it comes to walls, there’s really only “on,” “off,” and maybe “leaning against.” (I guess there’s a few more if you consider “Now my watch has ended,” “Just another brick,” and “Dear God, Donnie, get off this wall idea!”) Yet developers constantly belch out attempt after attempt at one-upping everyone else’s off-the-wall-manship, until every game is so uniquely different that they’re all as homogeneous as every Call of Duty, Assassin’s Creed, and Madden title put out there. That makes it kind of difficult to go back and play a quirky game that was, in the 90s, a truly unique gem of quirkiness. And it was also kinda bad.

The game has a twenty-year-old reputation for charming its players.

Earthbound is an urban RPG that doesn’t so much have a plot as a Rube Goldberg machine of events that leads our suspiciously unquestioning protagonist through a world of oddities that would make any sane person wonder if that mushroom we fought just outside the first town didn’t have its own special brand of magic. The game starts like plenty of other games, with some poor unfortunate protagonist getting roused out of a sound sleep. In this case, Ness is woken up by a knock at the door, only to find it’s his neighbor, Pokey, whose adjectival name describes something painful and penetrative on account of him being both a fucking prick and a pain in the ass. The two take off in the middle of the night to investigate a fallen meteor nearby, which as you can imagine naturally leads to an epic hero’s journey wherein Ness dismantles an organized religion, gets lured into an ambush by a prostitute, bails out the excessive debt mysteriously racked up by the blues brothers, and performs a surprisingly gruesome abortion of an evil alien fetus (possibly), all while rampaging through the local towns smashing everyone and everything with a baseball bat like the delinquent gang members in Stand By Me. 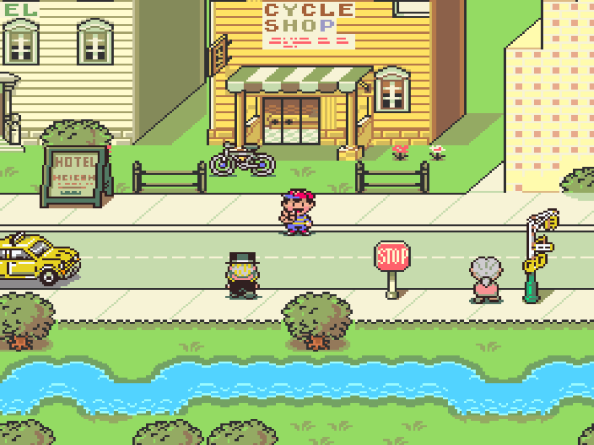 Halfway through, Ness just starts flipping him off, hoping he’ll get the picture and stop following him.

A lot of people harp on Pokemon for that whole adolescent vagrancy thing. While mom does seem awfully quick to kick Ness out onto the streets to give herself some private time with her soap operas while lying to school officials about his whereabouts, at least Dad routinely deposits money into your bank account so you can afford food and hotel rooms—although by the end of the game, his nonchalance about the fact that his son has half a million dollars on his ATM card makes me suspect some money laundering scheme. No, Earthbound raises bigger concerns. Like the truly old school NES games, characters for the most part have to be resurrected at set locations, specifically hospitals. Personally, if the same kid kept showing up as many times as I needed to revive my characters, someone ought to call Child Protective Services. At the very least, the hospital probably shouldn’t keep releasing their patients to the kid carrying the bloodied baseball bat. Even more concerning, every so often some bearded weirdo flies down from the sky to photograph the party (for the end credits). I might even be willing to overlook the fact that this old guy is following around a thirteen-year-old boy taking pictures if he’d just stop interrupting the game so damn often to do it. Come on, dude! Snap your shots subtly from the bushes like a regular pedophile. 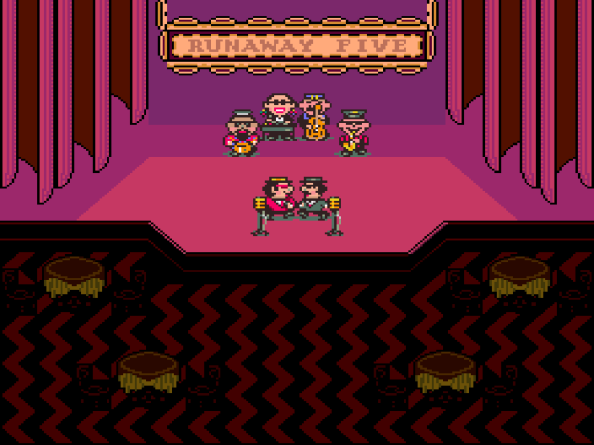 I lay down a fat wad of bills to bail these guys out of debt, but i still have to pay to see their show?

So I already said that stacking this game up next to modern, quirky RPGs is about as fair as hiring a mechanical engineer based on his skill with an abacus, so let’s put Earthbound into chronological context. Gameplay seems pretty standard, with a top-down world exploration alternating with first-person, turn-based battles. Character customization, for the most part, is stat-based and not within the player’s control, and while fights often do wind up reverting to mashing the A button whilst using your other hand to search for search nudeography.com for the Pink Power Ranger, characters include a small, but nice selection of magic and special attack items to keep things interesting. Furthermore, the main menu still operates about as well as a credit card machine in the self-check-out aisle, but it’s slightly quicker and easier to navigate than in other old school RPGs. All-in-all, this game has streamlined all the features we might expect from the original Dragon Quest, Phantasy Star, or Final Fantasy. 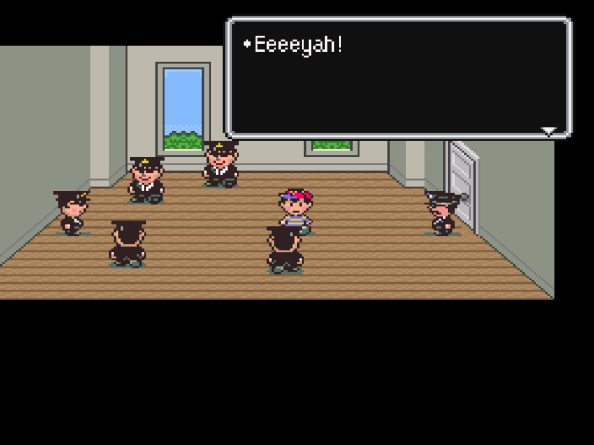 The moment Ness realizes that All Lives Matter won’t come and save him.

Here I am fighting something that looks like it was sneezed out of a wildebeest with ebola.

I do appreciate the quirky sense of humor Earthbound displays, and as I do enjoy old games, I didn’t so much care that the interface had been long outdated in 1994. But Nintendo could have taken some care to keep their content fresh, rather than try to sell us a bucket of milk from the “past expiration” shelf (and then boosting the price to $250 on the grounds that it’s “rare”) The game flouted just enough conventions to confuse me; being dead is usual a little more final than your average status ailment, so I didn’t figure out until the final dungeon that the highest level heal spell could also cure the common corpse. Magic spells get no explanation, and while items do provide descriptions that range in clarity from “horoscope” to “girl who really doesn’t want to go out with you but won’t outright say no,” there are so many items in the game for the sake of quirkiness that the player can get a certain type of fatigue for digging through the menu to check each one—AFTER they buy them. 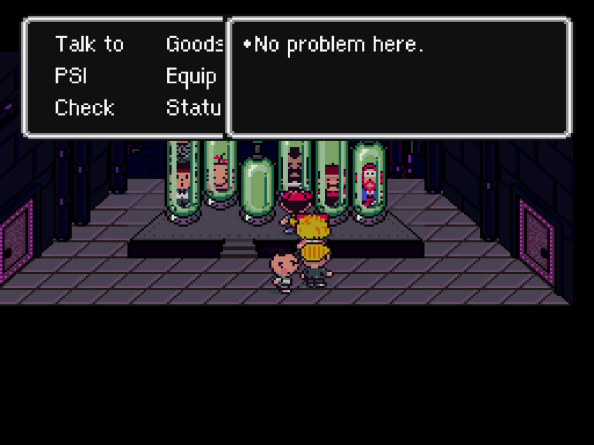 Nothing suspicious about a bunch of people shoved into test tubes.

Wait…how much? Is there something you’re not telling me?

Limiting your inventory to the amount of items that can fit into a taxidermy musk rat can be frustrating, but probably the most infuriating thing about playing Earthbound is using the phone. Periodically, Ness gets homesick and will ignore the brutal melee in favor of plopping down and daydreaming about cake or kimchee or mushroom and roadkill sandwiches or whatever you told the game your favorite food was. The only way to get him riled up into a skull-bashing frenzy again is—and this one I can totally sympathize with—calling your mom. Honestly, what is it with video games that way to simulate things that I hate doing in real life? Worse than the constant tether to you mom’s macaroni (no, that’s not a euphemism) is the need to call your dad. The only way to save your game is to call your dad at his mysterious, undisclosed location and tell him everything you’ve done. He’ll then ask if you want him to write it down. Then he’ll rattle off the exp needed for each character to level up, and launch into a schpiel about your family’s work ethic. Every. Single. Goddam. Time.

Earthbound doesn’t get by entirely without creativity, though. The game has one interesting mechanic in which damage dealt by enemies does not take effect at once. Rather, the character’s HP counter starts rolling down toward zero, giving those with the highest levels ample time to tell their wives goodbye, pass on their watch to their son, choke out the secret location of the hidden treasure, grail, or Skywalker, set their affairs in order and make peace with their god before they ring down the curtain and join the choir invisible. Mostly, though, I used it to wreak furious vengeance upon he who wronged me, and occasionally fumble through Ness’ magic menu with a Scooby-Doo-like grace, hoping I can hit the healing spell with my clumsy fingers, target my dying character instead of a dead one, the enemy, or a nearby rock, and cycle through the text narrating the battle like a combination sports commentator and a court stenographer fast enough to take effect before the victim’s final breath rolls over to zero.

What can he say except “You’re welcome?”

While I’ve been writing all day and would usually think of some exhausted, half-witted method to draw my entry to a conclusion that I can pretend works, I can’t drop this game into my annals without mentioning Giygas, the boss of the game. I get that Mother, Earthbound’s predecessor released only in Japan, set up Giygas and whatever back story, plot, and motivation he might have. However, if you’re like me—re: only released in the United States—you don’t have that to fall back on, and even so, I expect my games to recap any important points from previous installments (when done correctly, that is the reason I could play through Shadow Hearts 2 like a fully functional human being, rather than navigate the plot like George of the Jungle). Giygas gets none of that. We are told he’s evil and needs to be stopped for reasons I assume are good but not quirky enough to make the cut into the game. But he gets no screen time, no build up, seemingly no effect on the plot, and no interaction whatsoever with the heroes. Even the final battle fizzles out until I feel like I’m just wailing on Helen Keller with a Louisville Slugger. About twenty minutes into an unnecessarily long, yet impotent battle, I felt like I should just stop fighting and start making him feel inadequate by telling him about the bosses I beat from other games. “Did I ever tell you about Lavos? Now there was a boss! Sephiroth and Kefka were both pretty impressive. Oh yeah, and one time, I killed God!” 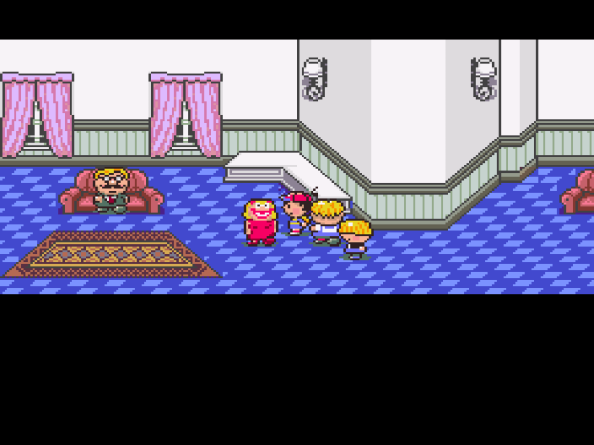 Dear God! Pokey’s mom looks like the Joker’s failed first run with Smilex. Was this intentional? Was she their first run at sprite design and they have a strict no-revision policy?

Oddly enough, I feel like this one actually merits a bat upside the head.

Now, do you remember how I said the battle was unnecessarily long? The game pulls kind of a dirty trick here. All the damage you deal in phase three? If it’s applied to Giygas at all, it has all the effect of slapping Exxon Mobil with a $100 fine. You can wail on him all day—and he can wail on you—until the power company shuts off your electricity because you never went to work to earn the money to pay your bills. They don’t tell you that, though. Instead, you have to figure out on your own that one character’s “pray” command, a useless little quirk that I ignored all but the first time I tried it out, is the only way to kill the boss. You pray, watch a cut scene wherein all your friends offer you their power (at least Nintendo took something from Squaresoft), and then have to repeat the process eight more times. Then he just dies.

Thanks. Useful. That makes an exciting showdown with the ultimate evil. Let’s just take all the humor and quirkiness right out of the game and make players figure out that the only way to dispel the essence of evil is to kneel down and pray for a giant aborted fetus. Way to make a fun game, Nintendo!