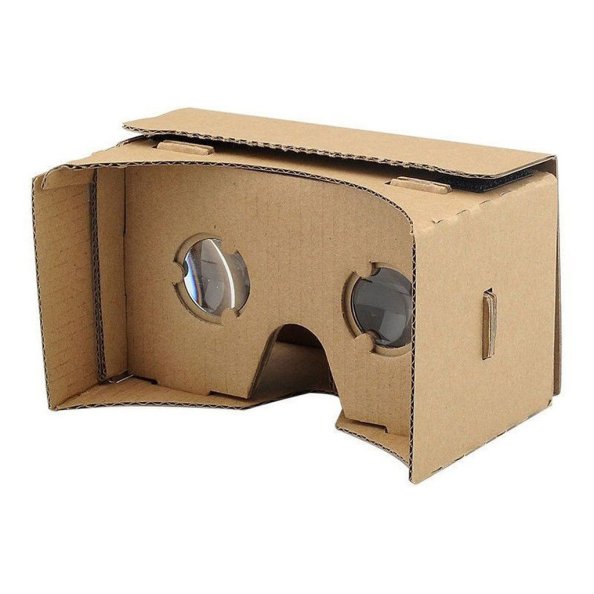 Ladies and gentlemen, the ultimate in technological gaming.

First entry of the new year! Or for those of you reading this in the year 2045 when mankind has dwindled to a few mutated remnants of its former glory, who have sparked the WordPress server to life using a bicycle generator in attempt to discover the meaning behind the hellish post-apocalyptic wastes slowly strangling you to extinction, 2017 might be a bit of a look back. But in honor of progress and the future and technology and all that shit, I’ve been fooling around with virtual reality lately!

Sadly, I didn’t suddenly fall into a small fortune and get an Occulus Rift, or even get in tight with engineers to try out a prototype AR system like the Microsoft Hololens or even as much as the voyeuristic dream, Google Glass. Actually I’m a big fan of Google. If a company that saves me from a $75 a month phone bill by giving me free service and I will gladly overlook any potential shady business deals, human rights violations, political bribery or attempts to block out the sun. One of their better ideas, Google Cardboard, offers a method of experiencing virtual reality for only $15…and the cost of a high-end smartphone. Literally just a specially cut cardboard box with lenses, Google Cardboard gives you all the thrills of depth perception with all the dignity of a schnauzer licking the hardened cheese out of a pizza box. 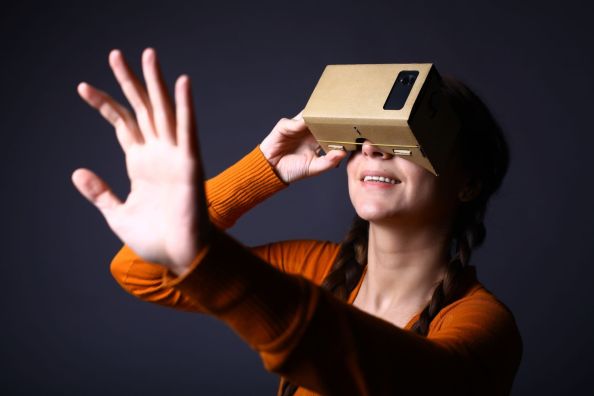 She’s either playing virtual spelunker, or she hasn’t figured out that her phone isn’t on.

The phone—in my case a Samsung Galaxy S3—uses the Google Cardboard app to play other VR apps in stereo like a crappy Pink Floyd music video knock off. You simply scan the QR code on the viewer…and then spend three days trying to calibrate it by hand so you don’t have to sit there with your eyes crossed so fiercely that they can see each other. After finally getting the calibration website working, I found out I had to pass off my 6cm lens separation as 10.5 cm. Then after making peace with the fact that Google now thinks I’m a sentient bobble head, I was ready for some VR.

The first thing I wanted to do was pretend the Middle Ages didn’t suck and that I could use magic and kill monsters without any risk of pain. So I found a game called VR Fantasy. This places you squarely in the middle of a labyrinth (Apparently people who live in fantasy worlds can’t think of any better method of pest control than architecture.). You play the role of an idiot blindly spinning circles in your living room while watching a sword levitate in front of you. All in all, the game was worth a play through, but had some issues to work out. Namely, since everything is controlled by the single button Google Cardboard gives you to vicariously tap your screen—thus taking the one real thing you could do to interact with the game and making it virtual—that means that menu options get a bit rough at times. The interface to look down and pass the cursor dot over the foot icon activates and deactivates with a sensitivity often only seen what Scooby and Shaggy try to run from a monster. And when you do successfully activate the walk-forward option, you move with a punishing lack of urgency. I swear there were 90-year-old rogues and barbarians passing me on their walkers. I don’t know if gout-ridden asthmatics are a unionized force, but they no longer have to worry about being underrepresented in fantasy games. This all culminates in an epic showdown with a hero suffering from ennui and a boss who must be nursing a severe hangover. Next.

Now you can add to the graphic realism of a game known for having intentionally unrealistic graphics!

What game does everyone want to play on a system designed to make a fantasy world feel real to you? Minecraft, a game that gives you painted Legos that look like they were spit out by a 3D printer stapled to an Atari 2600. So I downloaded Vrcraft. And stood on a diving platform staring down at a lush meadow that I had no way of reaching. I’m not sure which is worse: pretending the world is real but only having one button to send all your controls via Morse code, or realizing that you need a game controller for your phone that you need to operate while pressing a cardboard box to your face. Next.

Jurassic came as two separate apps. One puts you in an enclosed jungle setting, allowing you to observe carnivorous dinosaurs either on foot or riding on the back of one, and the other lets you do what any rational human would do when encountering a fascinating animal that hasn’t walked the earth for 65 million years—kill it, thus ensuring at least another 65 million years before they have another shot at life. The hunting game isn’t bad. All you have to do is spin around, aim, and pull the trigger when you see the dinosaur. The virtual dinosaur tour strives to emulate the tour from Jurassic Park a little too well, as you don’t see anything except a tyrannosaur and a pair of raptors.

Cherry Blossom bills itself as a tool for relaxation. It looks more like a guy dicking around with unity who drew a tree in three dimensions and figured out how to overlay a layer of falling pink petals. That’s it. You stare at a fucking tree. There’s not even a background. I can’t even think of a clever way to describe that because “staring at a fucking tree” is probably the most exaggerated form of boredom anyone has ever come up with.

In virtual reality, you’ll no longer feel inadequate about your penis!

The next game on the list actually managed to pry open my wallet and extract a handful of coins from my clammy, dead, decomposing hand. Simply called Alone, the game lets you emulate a world with no other humans around, although chances are good that any early adopter of VR technology would consider such an emulation rather redundant. The free demo puts you on a couch, watching TV. Again, this doesn’t quite count as a brilliant and revolutionary implementation of virtual reality technology, but after a few moments of watching flickering scenes of what I can only assume is a bad porno, creepy stuff starts to happen. Granted, if you’ve ever watched a Japanese horror film, you’ll be able to check off every box on your bingo card, but here’s where the VR actually makes a difference. At least until you buy the full version, move on to the second scenario, and quiver in terror as an understudy for Candy Land crawls out of the closet and you feel so bad for it that you feign a scream or two just to boost its confidence.

So even the best of these games can only keep up the quality through a demo. Can no one come up with a fascinating use of virtual reality that will improve my life as all the science-fiction movies have promised since the Star Wars Holiday Special? Then it struck me. What one thing has pushed forward technology by leaps and bounds since some caveman first learned he could smash a log with a rock? What one thing drove people to disseminate wood block printing, theatrical lighting systems, the television, DVD camera angles and particle accelerators for quantum physics?

Having grown up with an unnatural predilection for Sailor scouts that bordered on something psychiatrists might discuss at a conference, but which nonetheless usually had more positive results than my interactions with real girls, I always wanted an anime girlfriend. Fortunately, through the magic of virtual reality I…well, I still have no idea what it’s like, but at least I can pretend to have sex with one as long as I don’t expect things like physical stimulation, verbal interaction, or human contact. So basically, it’s exactly like my interaction with real girls. Except naked. But even that comes with a drawback as the phone was so close to my eyes that I could count every pixel on the screen, thus making the finer details blur together as though I was watching her on the news and they wanted to protect her privacy.

And I guess that pretty much embodies my main complaint with Google Cardboard. It’s fun to screw around with and you might as well give it a shot considering the price tag, but they can’t hook up an app to your brain to stimulate your senses. And even if the field of vision wasn’t narrower than a Southern Baptist’s list of acceptable prom dates, if you pay even the slightest bit of attention to your peripheral vision, you won’t so much feel you’ve been immersed in a virtual world as you were diving head first for the last Kleenex and got stuck in the box. So play around with it, but don’t get your hopes up. The term “virtual reality” doesn’t describe Google Cardboard quite as well as “sitting really really close to the screen, slowly disintegrating your optic nerves with blinding radiation.”