Rebecca’s hot, but you have to take Billy too if you want the handcuffs.

“Traaaainnsss! TRRRAAAAIIINNNS!” God…a zombie game that starts on a train. What’s next? Fighting ghouls in an open field of grains? Perhaps being stalked through a hospital full of the creatures hungry for sprains. Oh! I got a good one: Resident Evil 8, opening on the Raccoon City Stock Exchange, where the living dead are on the move for capital gains.

Zoinks! I sure hope we don’t get lost in this creepy train, Scoob!

My favorite thing about the first section of this game has got to be picking up a map for the train. I mean, it’s a train. Who maps a fucking train? It’s practically a one-dimensional vehicle. You know what? Let me draw a map of the train right now: ————— Mischief managed, there, Harry Potter. You know where everyone is? On the train. Right there. Look, not to be judgmental, but if you’re the kind of person who needs a map for a train, maybe we should just chalk up your being slaughtered by leeches as nature taking its course. Survival of the fittest.

Anyway, Resident Evil Zero: Aptly named because that’s how much ammo I had by the end of the first section. Have you ever tried going after a shambling hoard of corpses in one of the old-school RE games with just the crappy knife they give you? I’ve never felt so much like a post-op hernia patient than when I’m systematically trying to plunge my arm into those fetid, rotting garbage disposals. 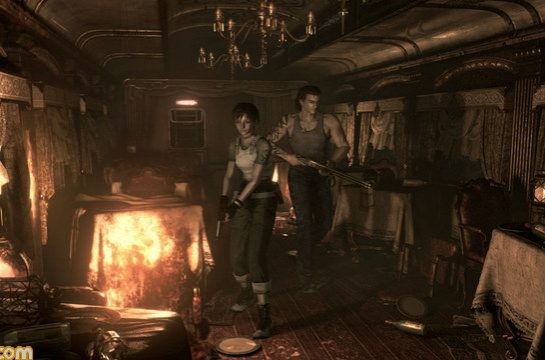 Step one: work together to find a way around a train. Step two: team up to fight leeches.

Knife combat seems to be less a thoughtful inclusion in the game and more some rogue coder’s attempt to overcome the deep-seated scars after a childhood encounter with a drunken mohel. 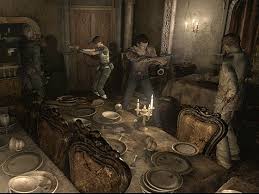 The innovative partner system allows you to waste ammo at an all new rate as your dumb-ass partner blasts a bird with a grenade launcher you forgot you had equipped.

Ahem. Anyway, I suppose if I’m going to play through all the RE games (give or take), I ought to say something about each one specifically. Okay, “Resident Evil Zero is Capcom’s first attempt to introduce a partner mechanic that no one ever asked for or wanted.”

The plot follows Rebecca, the hot, kid-sister type who serves as Chris’s sidekick in the original, as she works her way to the Spencer Mansion. She teams up with Billy, the mistaken-criminal with the heart of gold. He pulls a daring jailbreak, cleverly spying his chance to escape when his guards are devoured by monsters. It turns out Umbrella was pulling experiments on prisoners and he was likely on h is way to be given the full Albert Wesker beauty makeover. That was kind of a cool element.

Ah hell yeah! Who could say no to free leeches?

The villain is obviously auditioning for a better role in a Final Fantasy game. Picture the standard disgruntled employee type. Except when you work for a grocery store and your boss shortchanges your time card, you steal a few grapes and walk out with a few office supplies. When you work for Umbrella, they assassinate you, and you get revenge by stuffing a few dozen genetically engineered leeches into your pockets and wreak bloody havoc with a biblical-style plauge.

Seriously…I wish I could wreak bloody havoc when I was mad.

The game follows the series’ usual formula in Capcom’s unerring, Mega-Man-style manner. However, they do get rid of the magic boxes to store extraneous items. Instead you just scatter your junk on the floor like some redneck family’s lawn.

Wait…what? Did I miss something? I didn’t get a grade. What the hell!