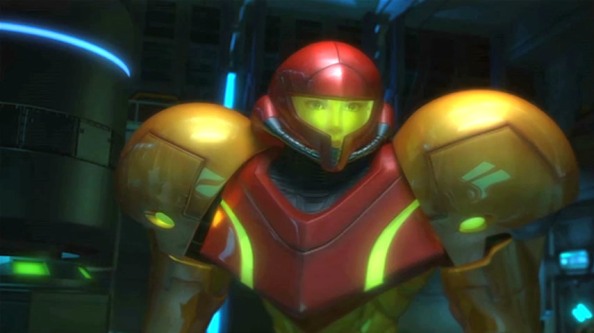 I know I live an awesome life of adventure as a kick-ass space bounty hunter…but maybe I’d be happier taking care of a whiny shit-factory who won’t develop a reasonable circadian rhythm for up to a year.

At the end of most video games, characters are pretty powerful. That poses a problem for direct sequels. If you want to go through the process of growth all over again, the game has to do something to turn back the clock, wipe out all the progress, experience and common sense, smash all the items, cancel the credit cards, take out a second mortgage on the house and smash the headlights on the car, just for good measure. And yes, developers might get a little bored with cliched catastrophes, I get that. 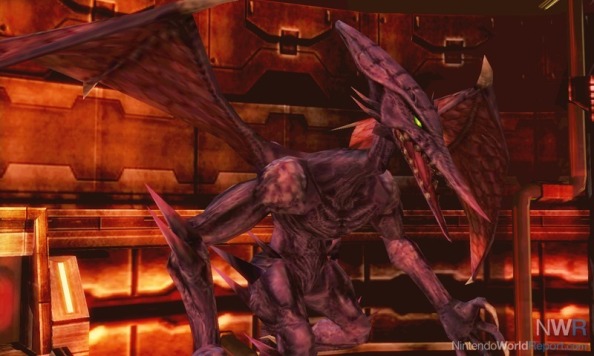 Ridley is confused as fuck as to what he’s doing here and why Samus is suddenly interested in his potential as a father.

However, I’ve never had a story line interfere with gameplay quite so bad as in Metroid: Other M. Coming straight off her adventure on Zebes, Samus starts to question whether using an infant as a meat shield between her and mother brain might have crossed some sort of line—you know, the kind that gets you put on an FBI list. She intercepts yet another distress call—because Nintendo isn’t tired of all their cliches—and runs into her former commanding officer intercepting the same distress call, thus beginning a whole, wacky will-they-won’t-they scenario like some sort of outer-space sitcom.

i gotta be honest, faults aside, this is exactly how a 3D Metroid should play.

So here’s the catch: Samus still has all the equipment from Super Metroid. She just decides not to use it unless Commander Adam tells her its okay.

Where shall I start with that one?

It isn’t as unreasonable as everyone seems to think that a highly trained and competent bounty hunter would, out of either respect or the spirit of cooperation, find wisdom in submitting to authority. But I find it increasingly hard to put faith in her training and competence when she sits basting in a pool of fourth degree burns, waiting for daddy’s permission to turn on the air-conditioning.

So maybe I could ignore a shitty storyline that turns one of my childhood icons into a weak-willed gender stereotype drowning in her own Vagisil, as long as the game play is good, right? For the most part, it’s a good game, after all. And when she’s not crying about her biological clock in a cut scene, she is literally tearing the limbs off monsters with her bare…er…power suit. Except Metroid loses something by removing the scavenger hunt aspect. Knowing she has the brains, heart, and courage all along has two obnoxious side effects: one, either she gets to an obstacle that we know full well she can overcome, but we have to file it away for later, or two, the good Lord Adam giveth what Samus needs as soon as she needs it. Either way, it actually makes the game a little less fun to know you’re not going to find anything really useful or powerful as you scuttle back and forth on the ship.

Um, excuse me guys, I can’t use missiles unless I’m rooted to the spot and I need just a moment to get the wii remote to figure out where its…no fair! Time out! Time out! I should have bought that Pip Boy!!!!!!