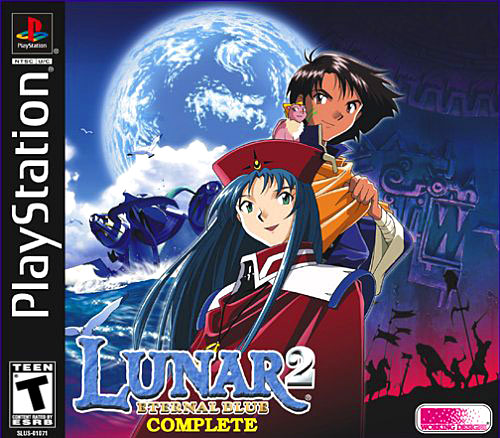 Well the past few months have definitely proven educational. Here I have a brand-new fantasy novel fine-tuned for readers, ready to go out to agents for the first step in the publication process, and what type of fortune and glory do I discover? I’d have more volunteers to test the stuff fermenting in my cat’s litter box than to read my latest fantasy-adventure epic. I’d say that being an author makes me feel like dating in high school again, but damn…by the time I was seventeen even I met a girl who let me touch her tits. Funny, now that I’m not trying to get laid, I end up getting rejected more often than a drunken hobo with eczema offering women the last swig of his whiskey if they’ll touch his penis. So…here I return to say moderately witty things about video games, where I can at least pretend than the handful of people who have liked random articles are actually regular readers and not just trying to draw traffic to their own blogs.

[sigh…anyone want the last swig of my whiskey in exchange for publishing my book?] 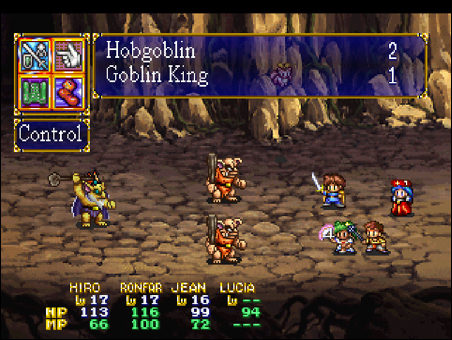 Jean is going to combat the Goblin King with a little Dance Magic Dance.

So here we go…Lunar 2: Eternal Blue. It figures that a game set on the moon would be totally eclipsed by its predecessor. Lunar: the Silver Star Story Complete, as I’ve said before, is like a magic mushroom trip in video game form: a rush of pretty sounds and colors, creative ideas, a sense that you’re doing something important, and a total euphoria culminating in the feeling that even though it lasts about 26 hours, it ended way too early. Well, fortunately Working Designs found a way to remedy that feeling of disappointment coming down from the final boss fight: requiring an additional five more hours of gameplay to get the good ending! 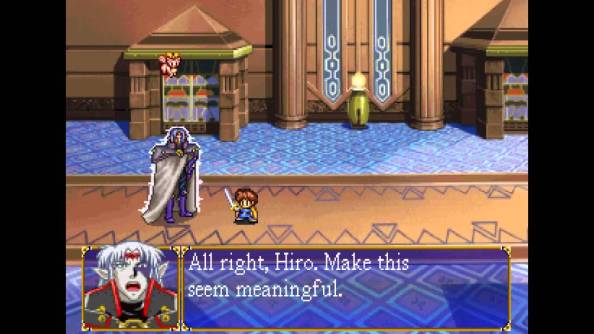 …because otherwise everyone’s going to write off the game as a crappy sequel and we won’t get any installment but Dragonsong for the next twenty years.

Quite honestly, I’m on the fence about how to describe that; either it’s like some sort of customer loyalty program throwing in a free tenth dungeon for every nine that I clear, or it’s a Nigerian Prince who ran into some unexpected red tape while trying to wire me my dear Uncle Mtumbo’s inheritance, and just needs me to crawl through a few extra dungeons before that money finally shows up. I think it all comes down to the battle system. In the first game, battles were semi-tactical. The player had to account for enemy formations, weaknesses, and the ranges and zones of their own attacks. MP had to be conserved, but if you played it right you could easily spend your way through battles and still have a little leftover to save for some rainy day boss fight. Most RPG battles tend to be so repetitive they could simulate what it’s like to have autism, but the Silver Star Story takes great pains to avoid that. Eternal Blue, on the other hand…well, you may want to avoid loud noises and watch out for antivaxxers, because Working Designs threw all that careful planning out the window. For most fights, the best option you have is just to mash the attack button like you’re trying to get an elevator door to close. 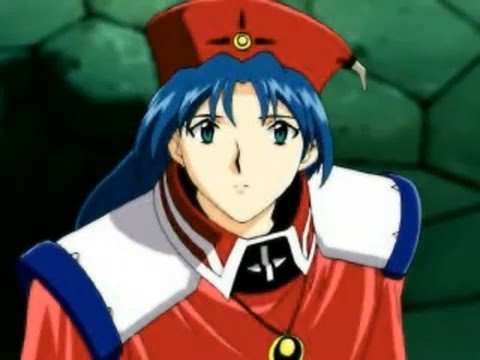 This is why you don’t see a lot of Lunar cosplayers.

I mean, I guess it’s worth playing. I did, after all, play through the bonus dungeons to get the good ending, but honestly when the girl decides to dump the hero in favor of chilling out for a few thousand years on a planet sterilized by a magical nuclear apocalypse…well, it triggers flashbacks from high school, so naturally I’m not too inclined to leave it at that. But my guess is that, while the Silver Star Story was revised and fine-tuned with love and care until it was perfect, Eternal Blue was spit-shined, wrapped in plastic, and hastily chucked on the next truck heading out for Walmart. But hell, what would Working Designs know about revision? It’s only literally what their name means. 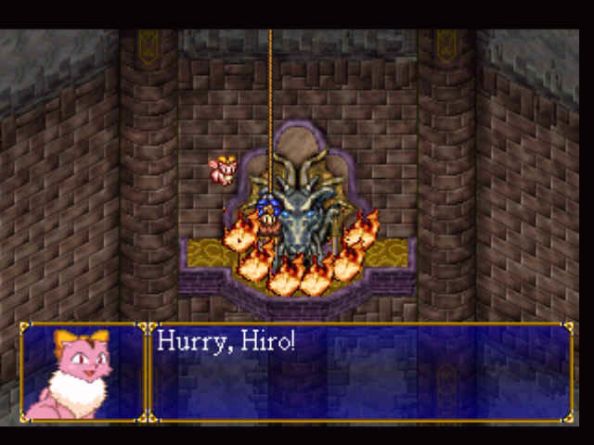 A hero named Hiro. The most original idea since spelling Dracula’s name backwards.

Also…a general note for creative minds everywhere…stop naming heroes “Hiro.” Yes, the Japanese name sounds an awful lot like the English word “hero.” That being said, it is not insightful, funny or clever to christen your protagonist thusly. It is nothing more than a bad pun. A dad joke. It makes your story less classy than a Carrot Top comedy routine.