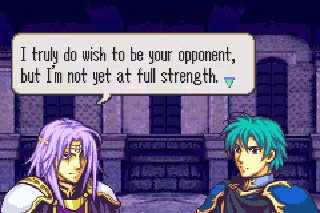 Ah, yes…the tropes are strong with this one.

Although Fire Emblem is quickly becoming a new favorite series for me, my efforts to charm and amuse you by saying something witty and unique about each game are stymied by the ever-present reality that reviewing individual games in a series is often as productive as reviewing individual chocolates in a bag of M&Ms. That does speak to the strengths of the industry. After all, no one wants to dig into a bag of M&Ms and find twenty chocolates, five skittles, two pennies and a clump of cat litter. Likewise, if Nintendo has established a medieval-fantasy strategy series, it does not behoove them to give players “Fire Emblem: Banjo Simulator.” That’s good for players, but for those of us who write about games, the “if it ain’t broke” approach makes reviews a little difficult to write.

Zoinks! Scoob, what say you and I check out the kitchen instead?

It’s a fairly simplistic strategy game that reminds me either of Shining Force on the Sega Genesis or a game of chess played on the back of a speeding jet ski. Characters have classes such as knight, archer, paladin, mage, dancer, or insurance claims adjuster, and march into battle with nothing but their unique stats, a few class-specific characteristics (pegasus knights can fly over mountains, for example), and an assortment of weapons crafted from high-quality candy glass so that they’ll shatter after a handful of uses. Victory goes to whichever army can successfully bludgeon the gate keeper, enemy general, or living daylights out of everyone on the other team.

Laurana, Tasslehoff and Flint will come by to pick it up later.

The story opens on a continent comprised of several kingdoms, one republic, one empire, and zero confusion about who the evil invading power will be based on the Star Wars rule of fantasy clichés. The Empire of Grado starts conquering neighboring kingdoms for no purpose other than to smash their family jewels (literally) in order to set free a long imprisoned demon king. I could make a joke about those motives being so cartoonishly villainous that its like congressmen pitching poor people into piles of burning coal just to speed up global warming, but honestly our current government daily bemoans the lack of trains in this day and age because it reduces the efficiency of tying girls to railroad tracks. Donald Trump is just a handlebar moustache away from being a cartoon villain himself. As for Fire Emblem’s primary antagonist, we get a young prince who can’t decide whether or not he’s possessed by the demon king, controlled by the demon king, or just envious of the hero, so we spend the entire second act of the game chasing around a kid more indecisive than a college student with identity issues who’s on the verge of changing his major for the third time. 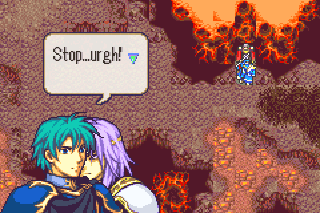 The Sacred Stones ramps up the difficulty compared to Shadow Dragon by limiting funding and weapons and replacing them with enough enemies to make the Battle of Pelennor Fields look like a fair fight. Unfortunately, the game seems to have made one offset too many. In spite of names like “Steel lance” and “silver sword,” enemy weapons seem to be forged entirely from noodles of varying degree of wetness. From the beginning, I had a character who wouldn’t take damage if he played a round of golf wearing full plate armor in a lightning storm, and he found himself in good company by the end of the game. While it had its moments, especially near the end of the game, several battles felt much like the Battle of Pelennor Fields if Gandalf had arrived at Minas Tirith with a truck full of AK-47s instead of a socially awkward hobbit. At times even it felt as though the true challenge of the game was leveling up. Unlike Shadow Dragon, Sacred Stones did offer chances to fight outside of of the main story campaign, but the game’s algorithm for assigning experience points didn’t seem to follow any pattern of current level, enemy’s level, or effectiveness of actions, but rather seemed more in line with the effects of locking a chimpanzee in a room with a bottle of whiskey and a dart board.

Sacred Stones retains the series’ traditional Animal House style endings. The good-natured thief is the one who steals a horse…and puts it in the dean’s office.

Death, in real life, is almost as unforgiving as the girls I dated in high school and college. In video games, though, it’s about as debilitating as the check engine light on my car; it’s there, it worries me, but if I can usually go a little farther without completely bursting into flames, it’ll probably go away on its own at some point. Video game death naturally applies to all characters equally, with the exception of Fire Emblem, one character in any given Final Fantasy game, and that thirtieth guy in Contra. It is a rather unique mechanic, I have to say, because the concern for a character you’ve invested time and energy into can really change the game when he suddenly goes the way of your schnauzer who died when you were in fourth grade. The biggest difference, of course, being that you wear out your reset button about as much as you’d normally wear out your B button. Okay, maybe that’s considered cheating by some…in the way that offering to motorboat your female coworkers’ enormous racks might be considered sexual harassment by some…but I prefer to think of it as forcing me to learn the absolute best strategy for the situation. Resetting the game when a character dies. Not the motorboating things.