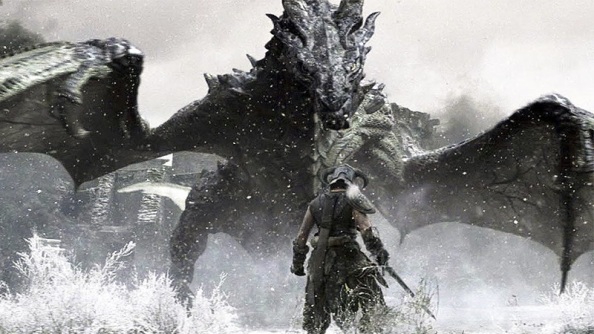 One of countless beautiful images that aren’t actually taken from real gameplay.

Writing this about halfway through my hiatus, it’s probably a good idea to look back and see how productive my break has been. Let’s see…I sent out submissions for my novel and got about three form rejections and a bunch of non-answers…I got fifteen pages into a play and ran out of plot ideas…oh! This one is fun—I regularly spent my days having nine-year-old kids swearing at me like they’ve got one night of shore leave and want to get into a brawl before visiting the whorehouse. No, I wasn’t playing Call of Duty online. I was substitute teaching fourth grade. Yeah, take that, my parents’ generation; a lifetime of video games made me a pacifist, and one semester of being a responsible adult shepherding the minds of our nations future gave me fantasies of having the authority to draw and quarter children. So after a few weeks of “break,” I began slipping into an existential despair void of all meaning and purpose to the point where I imagined I might soon have to fight against the heroes of a Final Fantasy game. So I did the most reasonable thing I could think of; I played Skyrim. 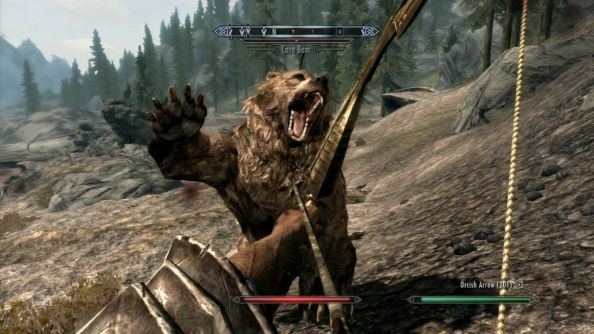 For those of you unfamiliar with the game, saying, “I need to devote time to my writing” and then popping in The Elder Scrolls V is a lot like those girls in high school who told me, “I’m not ready for a relationship right now” before diving tits-first into bed with some douchebag who’s favorite brand of cigarettes are “found on the side of the roads.”

Yep. A hundred plus hours of beautiful scenery, which sadly is more than we’ll ever see in the real world.

Skyrim expands on the world of Tamriel, taking players to the far northern province. The country is split into several holdings, each ruled by a jarl, proud, stately noblemen and women dedicated to preserving law and order in a bountiful world with a necromancer for every corpse and a clan of bandits for every shopkeeper, and where 95% of the castles, outposts and other government infrastructure have been abandoned and fallen into disrepair. Personally, it doesn’t seem like having such a large and thriving criminal population would work well in a feudalist, capitalist or communist society, but Skyrim operates on a quest-based economy where everyone has an item they need retrieved, a cavern they need explored, or a foe they need slaughtered. Hey, it’s not my place to ask why all these vindictive spelunkers have misplaced their shit. My biggest concern is whether or not the potions I found in these ancient tombs have passed their shelf-life. You know, considering the completely dysfunctional nature of my idealized fantasy worlds, it’s a wonder I don’t vote Republican. I mean, there are so many thousand-year-old monsters awakening from their slumber to unravel the fabric of existence that you’d think Skyrim was the United States Senate. 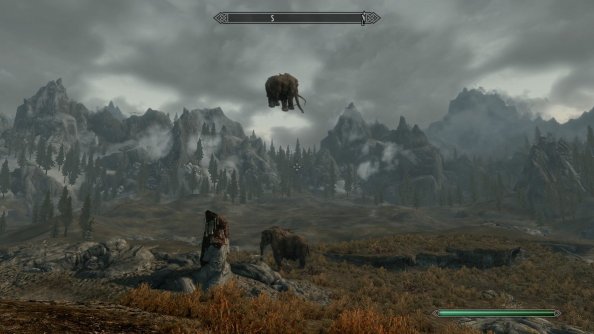 Yeah, a flying mammoth looks weird, but I guarantee that at least two or three NPCs have a prophecy about it.

Anyway, you play as the Dragonborn, the legendary warrior with the soul of a dragon who will save the world from a magical apocalypse caused by Alduin, the king of the dragons. At least, that’s what the game told me. Fulfilling my role as the archenemy of dragonkind, I once encountered a drake fighting two bears. I killed both bears to catch its attention, but the dragon immediately took off after a deer like a cat chasing a laser pointer. Not to be ignored, I chased down my ancient enemy, only to find him about five minutes later, a short distance from the deer corpse, completely absorbed in mortal combat with a mudcrab. But honestly, who hasn’t turned aside from their ultimate destiny in favor of a seafood buffet? Still, I have to wonder how many times I get ignored for something that crawled out from under a rock before the “it’s like dating in high school” joke gets old, and I have to ask some serious questions about my life.

Me versus the true dragonborn.

The game follows Western RPG format, meaning it tries to simulate the experience of tabletop gaming without all the pesky social aspects and no way to interact with the game but for a selection of one to three dialogue options thus robbing you of any creative thought or character personality. But if you’re fine playing a character with a personality as vivid and dynamic as a bucket of rocks, there are plenty of skills to practice. In particular, I played as a mage this time, something I rarely do. I might advise against this in the future. I played through the game once as an archer and remember that around level 30 or so, my arrows could tear through bandits like hollow-point shots from a .50 caliber Desert Eagle punching through 2-ply toilet paper. As a mage, though, you’re given an arsenal of spells that do a pre-determined amount of damage despite your level, which is more like trying to punch through a concrete wall using nothing but your forehead and a jar of aspirin. I’m not saying you can’t get by using only the basic skills, but you don’t see a lot of fourth grade music students learn to play a diseased recorder that’s been inside more kids than the combined clergy of the Catholic Church and end up playing for the Chicago Symphony Orchestra.

Wait…this isn’t a Skyrim screenshot. This is a picture of me cleaning out my basement here in Duluth.

I thought playing a mage might solve a few problems for me. Carrying around weapons and armor had always severely limited my inventory—a severe problem in a game full of more junk than an old lady’s attic. But not only did I still end up spending more time on inventory management than when I worked as a clerk at Sam Goody, I ended up repeating simple battles for hours on end because I came armed with what amounted to a taser with a dead battery and armor that wouldn’t protect me from a pan of bacon sizzling in the next room. But somehow, I still managed to work my way up to the Archmage of the College of Winterhold, a sweet package that gave me Indiana-Jones-amounts of time off for the purpose of adventuring, and absolutely no responsibilities to teach, help anyone, or maintain the day-to-day operations of the college (so basically, like a regular college administration job). Meh. It looks better on a resume than “substitute teacher” and “hobbyist video game writer with delusions that he’s funny.”