I’m pretty sure we’re looking at Skynet in his punk adolescent years.

Nineteen Eighty-Nine, bitches! Now you’re playing with power! Portable power! Nintendo successfully shoved all eight bits of their classic system into the ridiculously oversized pockets of your soon-to-be outdated parachute pants. This was so awesome, that virtually nobody cared that the green-on-green color scheme looked like someone had puked on a jungle commando in Vietnam, and that you could only see it under the noonday sun in death valley, if the batteries lasted longer than the drive to Radio Shack to buy new batteries. This was portable fuckin’ power! By which I assume they mean either the power to strengthen your wrist to Popeye proportions as you held up the game with the required lighting attachments, or the power to turn your anti-video game mom into a hardened criminal who swipes your copy of Tetris for long plane rides. 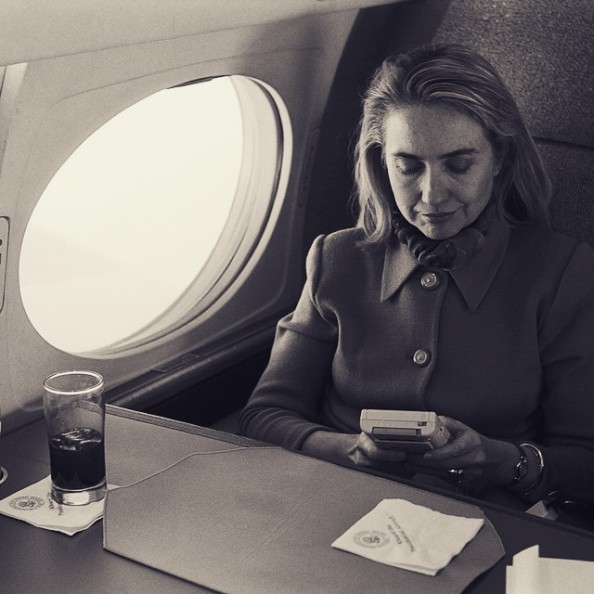 “If you put it just really simply, these violent video games are stealing the innocence of our children…” Which is why I have to steal my daughter’s Game Boy to play Tetris. Forget Benghazzi. This is the real crime. Lock her up!

Nintendo has a long history of innovation which usually lead the world into the realm of science-fiction ten or fifteen years down the road, but in the mean time they usually just induce stress fractures to your neck while staring at a rage-inducing red screen, require importing the cool stuff from Japan, or make you waggle a stick until the game enjoys itself more than you do. And even though we tend to remember the Game Boy more fondly than our first hand-job, I have to be honest to say that, like aforementioned hand-job, the fun was a little rough around the edges. Cartridges were a fraction of the size that NES games were, and with all that games had to be cut down, mangled and stuffed into cramped spaces, the offices at Nintendo probably resembled the aftermath of a game of Truth or Dare played by serial killers.

She doesn’t like it when you come into her mouth without telling her.

Enter Final Fantasy Adventure, which as best I can tell is Final Fantasy’s sixth installment in its own series while simultaneously the first game in their second spinoff which ended up being either the first Seiken Densetsu game or the prequel to the Mana series, depending on how you want to look at it. (However you look at it, this game is striking evidence in my theory that Japan numbers their sequels using a dyslexic idiot savant in the throes of a grand mal seizure induced by a cocaine overdose). This game provides an interesting example of how a Game Boy game can be both amazingly good and simultaneously more gaunt and emaciated than an anorexic greyhound with a heroine addiction. 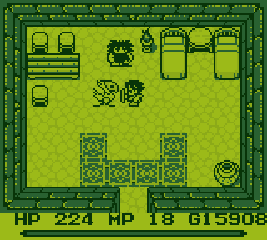 Dr. Bowwow reveals his cyborg chocobo. This game isn’t weird at all.

Gameplay resembles something Koichi Ishii scribbled out on a cocktail napkin after downing three bottles of sake before sobering up to make Secret of Mana. The player wanders through an expansive world that stretches as far as the eye can see (or until they run out of unique ID numbers represented by an eight-digit binary code. Whichever comes first). The map is split into grids, with each of the 256 areas being roughly the size of an airplane bathroom. As per usual, the goal is to traverse through hidden dungeons and towers clearly designed by a single bored architect who knew he had a monopoly on the construction market, so he drew a square room with doors exactly in the center of the wall, pumped out about 256 photocopies, sold the designs, and took all his GP and skedaddled to some colorful, tropical island likely on the Game Gear.

…I’m not sure that’s how that works.

Also present in nascent form are most Secret of Mana enemies, system of casting spells—albeit without adorable elemental sidekicks—and the concept of switching weapons to progress. As in the Seiken Densetsu series proper, the hero wields not just a sword, but axes, spears, whips, chains (and various assorted leathers and novelty condoms), sickles, turkey basters, weed wackers, enema bags, croûtons, medical malpractice attorneys, cocker spaniels and…you get the picture. Long list of irrelevant objects. Haha. Moving on. Your axe can cut down trees while the sickle can cut grass, and whips let you swing like Pitfall Harry over chasms and rivers. You know there’s a problem coming, right? See, the weapons don’t level up with you, and I’ve seen blind guys operate touch screens on drive-through ATMs with more fluid ease than Final Fantasy Adventure’s menu system, so occasionally the game all but forces you to fight with whatever weapon you need to cross barriers. You could look like Fabio and Arnold Schwarzenegger joined together Voltron style, but the instant the batteries fall out of your plastic Sword of Omens, even the cute little duck with bowl-cut hair is going to laugh at you. You get stronger and stronger weapons right up to the final boss fight, but once you get the morning star, that lets you harm magical enemies as well as break through walls that would otherwise require a special item, any stronger weapons you find only serve to mock you with their muscle-bound impotence. 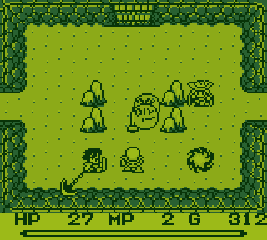 The game is unfortunately obtuse when it comes to objectives, directions, or puzzles. For a game that traps you in an area of no more than 8 squares at a time, methods to progress are harder to find than the Ark of the Covenant…and no one thought for an instant that Indy would blow that thing up. Here, I think I did drop key items by accident at least once or twice. Some doors can only be opened if you backtrack halfway across Antarctica to find one merchant who sells a specific item that you didn’t know you need. Some switches activate when you step on them, when you stand on them, or occasionally only when you turn an enemy into a snowman and push them onto the switch, as though your lean 80kg of muscle is no match for their 160kg of Mackinac Island Fudge. In the final dungeon I passed the point of no return and realized I hadn’t brought any keys with me. Far from being stuck, FF Adventure just expected me to find the one low-level enemy wandering the tower that dropped the keys, and that if I just left one of them alive before leaving the room, they wouldn’t vanish into oblivion like a dead parrot. Easy. I long for the days when I could just get lost in a labyrinth of rooms that all looked identical.

And yet I made it through, though being holed up in the woods of Northern Michigan on vacation, I really tested my data plan’s limits in digging up walkthroughs and maps. Somehow I survived the repetition and the unintuitive puzzles and the inventory system that lets you keep fewer items on your person than Joliet Prison. The game did throw some fairly interesting boss fights my way, but wandering around aimlessly does tend to pack on a few extra levels, and with a side character who heals you whenever you ask, Final Fantasy Adventure tends to lean toward the easy side.

As opposed to other plants that crave electrolytes.