Here we go again…time crunches, painting the house, obligatory get-togethers with racist family members, and expending any leftover effort into not beating the shit out of the army of overweight women with lousy knees who want to be certified in CPR as long as everyone has the courtesy to die on a table top, I’m running out of time and coming fairly close to catching up with my entries. So here we go: MAME Roulette #5

The Chibi Vegetables imposed on the background of casual alcoholics really provides a striking commentary on the economic disparities of post WWII Germany.

Today’s MAME Roulette starts off strong with a title that evokes merciless strength and fear into the hearts of those who hear it. The Berlin Wall, emblematic of the terror and strife of the cold war, would no doubt make a thrilling interactive noir stealth game with the potential to become a classic. And now that I’ve praised the title, let me tell you about the game itself, which combines elements of Dig Dug, Donkey Kong, Burger Time, and I think I even saw a bit of Bubble Bobble. You play as the most adorable Chibi Nato spy, running back and forth along the iron curtain, setting traps for the vile communist pumpkins, peppers, and other borscht-like agents of the Soviet Bloc. After digging a hole in the wall and trapping economically adversarial produce, you can smash them under the heel of your boot, sending them plummeting to their deaths and the deaths of their comrades below. Except sometimes you’ll encounter monsters that never chase you to a section of the wall you can trap. So on occasion, I’ve had a slew of enemies onstage milling about like a support group for clog-dancing oni, and I just have to wait until their meeting ends and they dance off to Perkins for their after party. There are also enemies that, as far as I can tell, know how to climb out of your traps and are thus unkillable, much like the true iron fist of communism. Hail comrades!

After defeating Billy, the game decides Jimmy will now fight a fire. Hey, I don’t see Mortal Kombat coming up with anything new.

Next up we have a true classic game…..’s spin-off. It make sense, right? Take a well-known beat-em-up and turn it into a fighting game. After all, the only real difference between the two genres is the length of the street. Unfortunately, that’s the limit of inspiration for this game. At least they were ambitious enough to add in a jazzy animation over not-Ken and not-Ryu’s signature moves so as not to get sued by Capcom. I’m pretty sure the game is narrated by the love-child of Futurama’s Inez Wong and every racist stereotype that ever appeared as an extra on M*A*S*H.

This isn’t a screenshot. This is an actual video of someone golfing.

I never understood why the world of sports penetrated so deep into video game culture, other than perhaps as a result of bullies trying to emasculate nerds. Sports games are so notoriously bad that they’re cheaper than toilet paper and less likely to sell when they’re used. That being said, Golden Tee is so bad that when I first searched for screenshots of the game, all I got was a bunch of generic pictures of arcade cabinets. The entire controls of Golden Tee consist of hitting the back button, then hitting forward. Sounds boring, but that’s pretty much all there is to actual golf, too. I’d say most of the challenge involves club selection, but even so I can’t figure out how to get the ball to go any farther—again, much like real golf. This game wouldn’t be interesting on a full-blown LSD trip. So…points for capturing the experience more realistically than any video game I have ever played. Next! 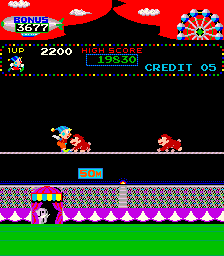 Let’s make it interesting, Charles. Most of these monkeys are harmless. One of them is the monkey from the movie Outbreak. Your move, clown.

There was a time in the mid 2000s when everyone with an inclination for programming put together their own flash game. By nature, these things were simple, and the simplicity often led to an addictive nature. In a way, it was a renaissance of the classic arcade era, where technical limitations just happened to force the ideal recipe for game play. That being said, there was something to be said for concept. The idea of shooting kittens from cannons for sport or stalking naked predatory rapists through the jungle. (my high score is 24,510. Leave a comment if you can top that). That being said, I can’t really envision anyone ditching school to blow off steam by playing Circus Charlie at the arcade. When the very first level has you literally jumping through hoops—an act we use to describe following tedious instructions to achieve a basic end—I really can’t see the entertainment value. You play as a clown performing a series of circus tricks, including jumping hoops while riding a lion, dodging kamikaze monkeys on a tightrope, and trampolining through a minor gang war of flaming bottles and knives. It isn’t terribly difficult, and occasionally a bird will come crap coins on your head. Big whoop. It has the simplistic, addictive game play of the aforementioned flash games, without giving me any content worth getting excited about. It’s like serving alfredo ravioli stuffed with packing peanuts.

I’m starting to notice a trend with arcade games, an epiphany delayed only by the fact that you have to have obvious differences before you can spot similarities. Let’s see…I’ll call this one a blend of Pac Man, Donkey Kong and Burger Time. I don’t know. You’re a mouse trying to raid the pantry, being chased by cats. Except unlike Pac Man where the ghosts have patterns and the maze has plenty of escape routes, the cats tend to corner you with the deadly efficiency of a police force coming down on a black man driving with a broken tail light. I’ve seen end-stage colon cancer patients with better chances and longer lives than this mouse. Chances are he’s less “Robin Williams funny” and more “I’m not sure the milk has turned yet funny,” since that’s the only way to explain why people keep shoveling quarters into this guy.

Failure teaches success…I don’t know if that’s profound, or a subliminal message urging me to feed more money into the machine.

What high school student wouldn’t want to dump quarter after quarter into a machine to play as a teenage version of Wayne Rogers, TV’s Trapper John from M*A*S*H? In Mikie (High School Graffiti), the player tries to knock other students out of their seats the way any mature 16-year-old boy would—by thrusting his ass in their face in the middle of class. He does this because apparently his girlfriend has written letters (no, not love letters. Actual letters, like a box of alphabets is the epitome of romantic expression) and hid them underneath other students. And since Mikie has a heart of gold and doesn’t mind that she extends the definition of “high functioning” autism so far that it’s collecting fucking moon rocks, he needs to gather these letters to figure out what to do next. Unfortunately, once he collects enough letters to spell out “OPEN!” he still has a way to go as he can’t figure out how to get through the classroom door. Meanwhile, your teacher chases you through the class as though wielding your sphincter as a class-A weapon can only be resolved through questionable physical contact. Actually, this proved a surprisingly good game, even though using A Hard Day’s Night on the soundtrack makes me wonder what they could have accomplished if they hadn’t shoveled their entire budget over to the Beatles’ estates.

Am I imagining the similarities? The big blue eyes, the curly blond hair…that Mikie is one smooth, wisecracking operator!

I’d do her…but only after a rousing bastardization of a classic Chinese game of chance.

In continuance of the trend of describing games as remixes of other things, The Last Fortress gives us a pretty straightforward description. Rather than stealing ideas from famous arcade games, this game plays like a combination of Mahjong an a faded Playboy that you found in the woods behind the school. Rather than pulling out matched sets of tiles, you can form a hand of up to six that you can match with available pieces on the board. It’s almost like playing go fish. Except you’re fishing for nipples. This game teachings good morals. For instance, a second player can (I assume) help you clear the board faster, just going to prove that cooperation is the best way to get laid. Seriously though, if I were really dropping quarters into this thing every time I tried to get closer to one of the badly pixelated 8-bit nudes, I could have just as easily bought a dirty magazine and had ten times as many girls to look at without any of the work. And I’m giving them the benefit of the doubt that Redtube wasn’t available back then.