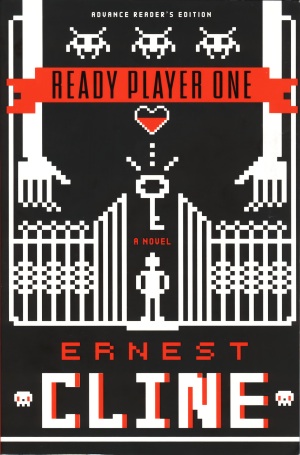 Having read one of the most amazing novels of my life, I naturally couldn’t wait to jump on to write about it and spread the glory of Ernest Cline’s paean to 1980s pop culture, Ready Player One. However, over the past two weeks of delays and distractions, I’ve come to the realization that God is most likely a triumvirate of Vlad the Impaler, H.H. Holmes, and the Mark Hamil Joker, because there’s no other way I can explain the series of sadistic practical jokes that the universe seems to take such joy in throwing at my daily goals and aspirations. To be specific, I’d like to tell you about a fascinating future where people escape from a socio-political dystopia by burying themselves in the most awesome virtual reality world anyone could possibly dream up, but I couldn’t because the SD card I use as a portable hard drive somehow was switched to read-only, and although there are plenty of commands in place for changing drive permissions, I can’t use any of them because the disk is read-only. Honestly, I consider myself a pacifist, but whoever set up read-write permissions this way is really making a good argument in favor of burning people at the stake.

Anyway, the plot begins about twenty years into the future. The Internet has been converted into a virtual reality universe by James Halliday, sort of an asthmatic Genghis Kahn who reigned supreme (with his buddy Ogden Morrow) as God of the digital world. It turns out he’s not completely all-powerful, though, which becomes very clear as chapter one gives us Halliday’s video will. Stepping down from his role as chief programmer and creator of the Oasis, Halliday takes on more of a zombie Willy Wonka role, revealing the existence of a hidden Easter Egg somewhere in the Oasis (and since the Minecraft world alone is currently about 7 times the size of the Earth, I’m sure it couldn’t be too much more difficult than locating Amelia Earhart, Jimmy Hoffa, El Dorado or Bigfoot). Oh, and the first person to find it gets complete control over the Oasis. He does offer a few cryptic clues, but as they require obscure knowledge of the 1980s, Halliday effectively does to modern pop culture what the U.S. did to the Narragansets.

After years and years of hunting, interest in Halliday’s golden tickets dies down until our hero, Parzival, stumbles upon the first clue in the path to the Easter Egg, relying on the oldest and most virtuous of hero skills, pure fucking chance. The book is wonderful, even if sometimes it does sing like a paean to obscure 1980s culture and technology, but it does raise just a few eyebrows that Parzival both lives on the game planet with the first key and has all the skills to decipher the first code in time to meet the sexy blogger who has deciphered it at the same time, then has just happened to have mastered all the skills required to solve the puzzles. Not to mention he lives 25 years in the future and managed to pick a screenname that doesn’t require l33t followed by a random string of numbers and symbols in various different alphabets. I swear if this kid opened a box of Lucky Charms, the leprechaun would leap out of the box straight into a bear trap that no one knew was there.

Furthermore, Cline builds Parzival as a dedicated Halliday fan who was spent more time in the 1980s than people who have lived in it. Like Parzival, I too live in a dystopian America where employment is considered a privilege of the super-rich and the only thing I have to call my own is copious amounts of free time and a handful of things downloaded from the Internet. I’ve played a great deal of video games, seen plenty of movies, and may have heard the most infectious songs of the day once or twice. But my knowledge of the 80s pales in comparison to Parzival’s, an impressive feat on his part since I, you know…lived through them. But if you even breathe wistfully while thinking about Bea Arthur, Parzival would immediately know which Golden Girls episode is on your mind, the date it first aired, and which frame to pause it in order to catch a glimpse of Betty White’s tattoo of a naked Sean Connery riding a dolphin. If a TV series ran in the 80s, he’s seen every episode three or four times at least. If a game came out, he’s developed a strategy to get a perfect score. If a movie was released at any time during the decade, he knows the script so well that someone wants to sue him for copyright infringement. Rest assured, the only way to become such an expert on a decade is to have lived through it three or four times. And the kid still has time to learn Latin. And just considering how often I subconsciously flip over to Facebook while writing this thing, the fact that he does all this with a fully immersive VR world at his fingertips means this kid is the guru of time management and should be narrating a self-help book instead, or he’s adapted the flux capacitor to run on water from the Fountain of Youth.

And yet, for all that Ready Player One relies on luck and chance more than a blind poker player, and while I still cringe at the Japanese character who’s entire personality consists of 1) Who has honor, 2) Who doesn’t have honor and 3) How cool was Zuko in season one of Avatar, the book is absolutely amazing, a combination of Star Wars, the Matrix, that guy in my high school math class who couldn’t stop quoting Monty Python and The Simpsons, and Willy Wonka (albeit without the assumption that everyone, right up to the queen of England who controls the entire British commonwealth wants nothing more to do with their lives than to see where some high-functioning autistic makes sticky sugar water). The story follows a textbook example of the archetypal hero’s journey, complete with themes of reality versus illusion, and which world sucks more (my money’s on reality, despite the warning given to Parzival that there are downsides to living in a world where you have free reign over imagination and godlike powers). For those of you less interested in the apotheosis of modern technology as represented in literature, the book reads like Ernest Cline dropped every Wikipedia article on pop culture into a blender and then pasted it over his manuscript. But even if you’re not into reading through someone’s autistic loops, he does branch out into pop culture from other decades, going so far as to name Parzival’s Firefly class spaceship after Kurt Vonnegut.

And for those of you who insist you could watch linoleum peel as long as it had a well-developed character, you’re both A) clear for takeoff on Ready Player One and B) extremely irritating to the people around you. Parzival transitions from a level one wimp with no social skills to a level 99 hero who infiltrates the villains’ stronghold for data and eventually wins over the girl. Of course there’s a transitory phase where he’s just a level 50 shut-in living in a studio apartment with a sex doll, but that’s what makes his character progress organic. (After I wrote this, word came to me that Spielberg has rights for the movie adaptation…just a warning, Steve, if you sterilize this story to make it family-friendly, you’re going to have a swarm of mythology scholars, quadragenarian nerds, and sex dolls knocking at your door with pitchforks and torches.)

Personally, while I feel I’ve done the book at least a modicum of justice, I have to sacrifice some of my normal humor to do so. Also I really need to clean the house, as there’s not yet a VR program that can just insert me into a clean one. To that end, I’m going to recommend one of the best literary analysts on youtube to take it from here: