Resident Evil 6 was released when the series was 16 years old. It makes sense in a way, a teenage series, angsty with hormones, trying to figure out its own identity. It tried to appeal to the popular kids at the Call of Duty Table, while secretly wanting to hang out with its old friends eating cold brains out of a bag. But in its quest to be liked by everyone, it just turned out an awkward, ungainly mess that no one wanted to spend time with. Well…time to reinvent yourself for college!

Okay this just got really kinky…

College, as it turns out, is Resident Evil 7:Biohazard, allegedly a continuation of the series, but more of a gritty reboot (*sigh* Really? Another gritty reboot?) set in a wilderness homestead of a crazy hillbilly family. Right off the bad, the game gives off a strong Evil Dead vibe—and if you’re not convinced by the protagonist losing a hand in the first five minutes to a chainsaw wielded by a demon-possessed girlfriend, then perhaps a later discovery of a chainsaw as “groovy” would convince you. There’s a strong attempt to mimic found footage films. It also invokes games like Haunting Grounds and Clock Tower with its low enemy count, constant pursuit, and a boss fight against a giant pair of scissors. There are even some nods to Silent Hill, if you dig deep enough…into the toilet. In fact, the only games it didn’t swipe elements from was…well…Resident Evil. 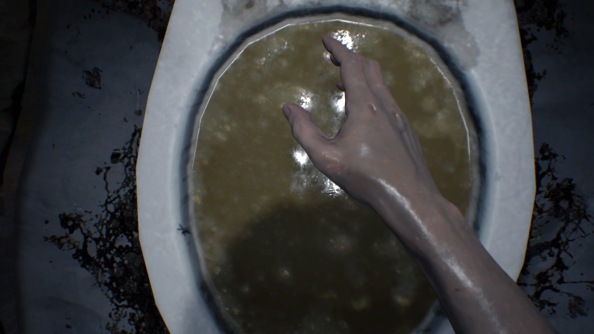 Resident Evil: Biohazard is quite obviously Capcom’s Breath of the Wild. That is to say, it’s a dramatic return-to-roots somehow by completely redefining everything that came before it. It’s a wonderful idea, but personally I’m not sure if the open-world go-anywhere-from-the-start style of gameplay works for a series that’s all about escape, finding keys and solving puzzles to progress little by little. To be fair, the game played beautifully, but I wonder if perhaps they didn’t overcompensate on the difficulty to prevent the inevitable maelstrom of backtracking when players needed one more Cerberus crest and had an entire fucking mansion to look for it and if I have to dash past the mould monsters in the basement one more fucking time and—oh look, this note tells me exactly where to find it—and…the basement it is.

But finding it tied to a hook dangling over a fenced in pit isn’t an obvious trap in the least.

Found this outside a frat house with a “free” sign taped to it.

The return-to-roots protagonist follows the series standard of cops, soldiers, and all-round grenade-launching badasses with a…systems engineer? Great. Because if I want to blast my way out of a murder house, I’ll need a good working knowledge of firewalls to prevent employees from downloading porn at work. Although again, to be fair, he actually shows perseverance, fortitude, and an abnormal level of dexterity considering his left hand is literally stapled to his stump arm. On the downside, he does have a tendency to leave a trail of open doors in his wake, not realizing it lets in all manner of pests like racoons, snakes, and murderous hillbillies driven mad by the fungal las plagas. The game, I think would be far easier if Ethan were only give a “close door” option every now and then. 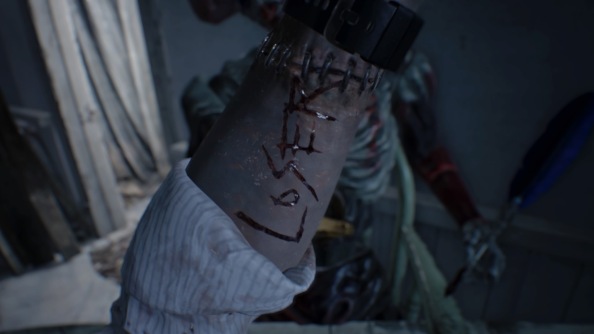 And yes, it’s fungi this time. They lost interest in their gluttonous viruses and ditched them for tapeworms with delusions of grandeur. Now they’ve apparently dumped those, too, for the shiny luster of mushrooms with anger management problems. I expect next they’ll move on to a colony of bacteria struggling with its gender identity or plankton that isn’t particularly good managing finances.

Sure, it’s creepy. But you know he only got the role because his dad was in Resident Evil 2.

As one final note, I began this series on Resident Evil by comparing the games to escape rooms with zombies. Well…they may have toned down the zombies, but I hope you’re good at escape rooms.

Eh. All in all, it’s pretty good. Didn’t need to be Resident Evil, but it’s a good game in its own right.

Yeah, they’ve chased me, beaten me, tried to shear me in two, and hit me with a car a few times, but I’m going to stop and judge them based on the books they read. 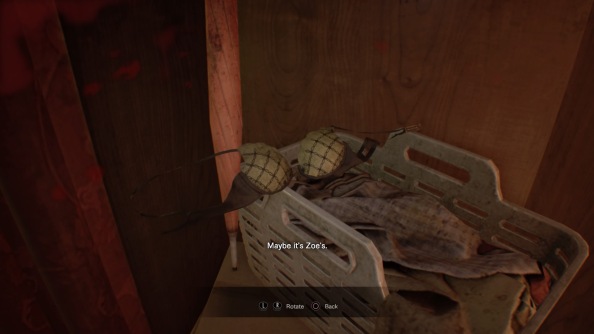 Ethan…getting a little weird there now.

So you know how you’ll find a puzzle and dick around with it before you leave and look for the answer? Well, I nailed it on dick #1.

This one’s only scary when you’re in your car.

Chose your caption: 1. My my my…this is a lovely room of death. 2. Obligatory tribute to Norman Bates. 3. “I use antlers in all of my DEEEE-cora-tinng!”