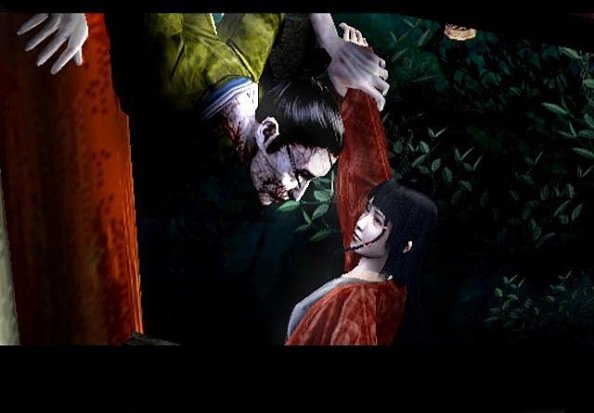 Any connoisseur of horror might get the impression that the Japanese have as much variety a a nun’s sex life. It seems like everything coming out of Japan involves young girls, hair flipped forward, emaciated and wet like a St. Bernard that just jumped into the bathtub. This is the genre that gives us the Ring, the Grudge, and Silent Hill. Does nothing scare these people save for thought’s of Cousin It’s prepubescent daughter? As it turns out, yes. There’s a sub-genre of Japanese horror called Kwaidan, which as best I can describe is two parts fairy tale, two parts urban legend, and one part Weird Al Yankovic album. Roughly translating to “strange story,” kwaidan deals with the tough subjects that the faint of heart don’t have the guts to tackle, like flying heads that detach from their bodies, monsters who have re-purposed their anuses as eye sockets, and in the case of Kuon, evil incarnations of mulberry trees who use silkworms to practice human sacrifices.

Kuon’s main storyline follows two characters. First, Utsuki is the disappointment child of Doman, a priest so cheerful and approachable that he looks on altar boy rape as being too kind-hearted. Doman gives Utsuki one job: take care of her sister Kureha, who hasn’t been feeling well on account of having died and begun to decompose. But Kureha runs off and, as luck would have it, darts straight into a haunted house like a bomb-sniffing dog navigating a field of land mines to get to a plate of snausages. Meanwhile, Doman sends the second character, Sukuya, into the manor with a team of paranormal investigators, most of whom meet the end we all hope for any time we see a team of paranormal investigators. Sukuya, however, keeps her wits about her and begins to piece together that Doman has taken a page from Albert Wesker’s playbook and sent them in as an unwitting buffet. Both Utsuki and Sukuya periodically run into the Japanese Shining Twins, inexplicably following the commands of these creepy little girls whose hands say, “Go investigate that room,” but whose eyes say, “We’re going to strip the flesh from your bones like a piranha with a tape worm.”

Kuon is neither a long game nor a difficult one. However, since each characters’ phase can be played in either order, they feel the need to run me through the tutorial twice. Sukuya’s tutorial was even delivered by one of the other investigators, a 13-year-old Buddhist monk who sounds like he studied in a remote mountaintop temple just outside of Houston. This boy has all the grace and poise we would expect from Feudal Japanese clergy, right down to his comment, “Can’t you just stick it in any old way?” when it comes to solving a puzzle. I presume. But the repetition doesn’t stop at the tutorial. The first have of both scenarios require the player to open the same locked doors, solve the same puzzles, and fight the same monsters. It’s as if taking priority over unique and thrilling game play, Kuon really wanted you to learn something, so it’s like an episode of Dora the Explorer. But with human sacrifice. (“House…underground…ritual chamber. House…underground…ritual chamber!”)

But that isn’t to say it’s a bad game. It does follow the pages of the survival horror playbook rather well, right up to scattering those pages halfway across the bloody country for you to find and assemble. Instead of zombies, you fight gaki. Instead of guns and bullets, you get cards that cast magic spells. And instead of keys you…wipe bloody rags on doors you want to open? I gotta be honest—that seems a little unsanitary. Not a lot of survival horror games culminate in an epic battle against hepatitis. It makes it all the worse by the seals on the doors being named after planets. I’m sorry, but nobody wants to carry around a bloody rag from Uranus, especially considering no one had yet discovered the planet during the story’s era, so the seal has to be either a butt joke or a reference to sailor scouts (none of which had been discovered yet either).

Just casually wandering through the aftermath of a lynching.

Unfortunately, for all that Kuon gets right about the genre, it also suffers from the same tropes as every other survival horror game. “Oh no! There’s a corpse blocking my path? If only I could lift my feet up higher than ten centimeters! Between this and the paper screen in the other hallway, how will I ever progress?” Or even, “A silk web stretches across the tunnel? If only I had a tool to get rid of it, but all I have is a magic dagger and a collection of magical fireballs! I guess I have to go back and search!” It almost feels like the developers got lazy and skimped on certain key details. Characters don’t move their mouths to talk, but they still hear each other just fine, apparently communicating like animals in a Garfield strip. That and the inexplicable repetition of certain events but not others pulled me out of the story a bit. They obviously wanted some sort of Resident Evil 2 scenario mash-up, but pulled it off like a sixth grader giving a report on a book he hasn’t read, so he just copies the plot of another book and hope his teacher won’t notice.

The game certainly isn’t winning any awards, except maybe “rarest” and “most overpriced” PS2 game, but it’s worth playing. It’s short enough that the repetition isn’t tedious, the atmosphere perfectly captures the feeling of a kwaidan tale, and the story is unique and eerie. I’ll even give the game bonus points for voicing Doman with the same actor who played Mojo Jojo. I guess that makes you the Feudal Japanese Power Puff Girls.