Two Castlevania reviews in a row? I can’t help it. Like any other medium of storytelling, video games have the capacity to be profound, to speak to human nature, to discuss questions that have plagued us throughout history. But how many games can actually answer the important questions like, “What do we face after death?” As it turns out…it’s usually a vampire that shoots fireballs and turns into a gargoyle. However, it does raise some questions of its own, most notably, “Why are we so concerned with stomping out the evil of someone who comes to life once a century, tries to set the drapes on fire, and then gets killed three minutes later by the bastard progeny of Indiana Jones and Devo? Shouldn’t we focus on something more truly horrifying, like religious extremism, unfettered capitalism, or people who wear leggings that look like a toddler glued shreds of magazines to a pair of magnum condoms?” As it turns out, Castlevania: Bloodlines does manage to connect a vampire with the life expectancy of a hemophiliac sword swallower to a greater social evil, namely, World War I, orchestrated in part to resurrect Dracula with the souls of those who died in battle. Kind of like American Gods, but with disembodied heads dive-bombing you like brain-damaged horseflies.

Don’t you remember one of the most frightening horror monsters of all time, the pile of gears? Seeing as how this is in Germany, I can only infer that this is the ultimate evolution of the Klink pokemon.

If I might interject my own logic, brain-damaged by one too many snaps of the whip, who the hell wants to resurrect Dracula? Forget that summoning a vampire has the survival rate of crawling into a den of hungry wolves wearing a Lady Gaga meat suit. Dracula’s time on earth is more limited than a man who hands a roll of quarters to a hooker, and is likewise ended by an angry man standing over him with a whip and a stopwatch. Stillborn fetuses have more of an effect on the world than this douchebag, yet for some reason people will orchestrate global warfare just to see this guy’s head knocked off by a lion tamer? And remember, Dracula can transform into a cloud of bats and fly away, yet his first and only reaction upon being granted sentience is to pounce on the legendary vampire slayer like a chemo patient taking on the North Korean army.

Looks like the dog got into the Buffalo Wild Wings leftovers last night.

The game itself, though, opens with your choice of John Morris, son of Quincy Morris of Bram Stoker’s Dracula’s fame, or his friend Eric Lecard, who previously made a name for himself in…the opening cut scene that loops if you turn the game on and fall asleep before you hit start. Anyway, Morris and Lecard finally nudge their way to the gates of Dracula’s castle, which with forty games in the series probably has a longer line than the teacup ride at Disney World. They battle through fierce monsters and gruesome traps to reach the pinnacle of Dracula’s throne, only to remember that Quincy Morris already killed the vampire lord about twenty years ago. Not to be hampered by such a minor setback as not having a demonic nemesis to slay, the two of them decide they’ve fulfilled the obligatory “vania” and decide to see how much mileage (kilometerage?) they can get out of “castle.” From here, this post-Victorian Harold and Kumar visit all the dank, Black Castles that Europe has to offer, such as the palace at Versailles, Dracula’s summer home at the fictional Proserpina Castle in England, and…a German munitions factory. What, did the hundreds of castles across the continent not develop the right atmosphere of dark, cold, ominous and bloody over the centuries of standing as powerhouses of brutal medieval warfare and disease? 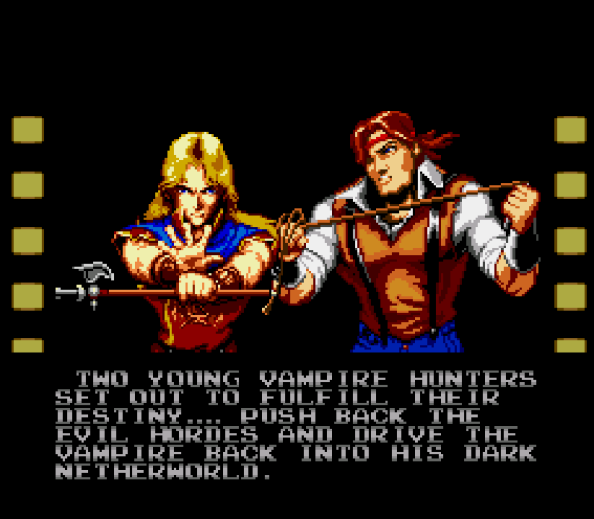 Why does Morris look like he’s about to be sexually gratified by garroting Lecard?

Intricate design, an atmosphere of horror, and a rich color palette straight out of a box of evil crayons has always made this series stand out, and while Bloodlines continues the tradition admirably, setting stages in Atlantis or the Leaning Tower of Pisa somehow detracts from the doom and gloom vibe that attracts me to the game. It’s like dressing up for a Renaissance Fair and finding out that half the people attending wore greasy wife-beaters with bright orange Crocs. 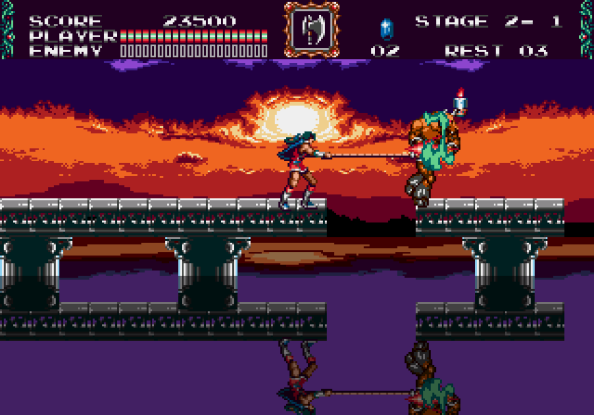 Nothing like a serene ocean sunset to make our hearts bubble with fear and terror.

That’s not to say, though, that Bloodlines is a bad game. Like other Castlevania games, it gives you plenty of opportunities to hop from platform to platform whipping monsters like a kangaroo dominatrix. Or if penetration is more your style, Lecarde makes a great addition to the team, a dashing Spaniard who combines the fighting style of Oberyn Martell and Scrooge McDuck. He can’t swing across chasms like Morris can (although admittedly, using a spear instead of a whip puts one at a severe disadvantage when playing Indiana Jones), but he has a longer reach, a pogo-stick vault of invincibility that can thwart death itself, and a special attack that rips through enemies across the entire screen and slows down time itself–yet I suspect the latter effect is less reminiscent of the stopwatch sub-weapon from the NES games and more a limitation of whatever Sega means by “blast processing.”

Remember, game developers, just because you *can* doesn’t mean you *should*

While on the subject of what Sega does that Nintendon’t, let’s add to the list “cutting the classic sub-weapons from the NES games.” Only the holy water and the axe survived the purge, and the cross seems to have been castrated down to a regular boomerang. Each one has a both basic attack pattern as per usual and a special attack that might cost a bit extra, but makes up for it with a super-flashy execution that hits enemies with all the force of a bowl of spaghetti. Minus the bowl itself. And just to clarify, there’s no sauce or meatballs either. Technically, each character has a fourth sub-weapon, a special attack that actually does make a difference, but since it vanishes at the first hint of damage, it’s usually gone faster than my self-respect at an anime convention.

Lecard tempting Lady Liberty to drop her toga for all the world to see. There’s an angel on the other side acting as her conscience.

Other than the sub-weapons being more limited than a nun’s options for sexual gratification, all the problems with the game relate to the story. And one of the benefits of games from this era was the instruction manual—they wrote the story in the booklet, and if it turned out a disappointment you could keep the book shut, never speak of it in open company, and pray it never embarrassed you when respectable guests came to visit.