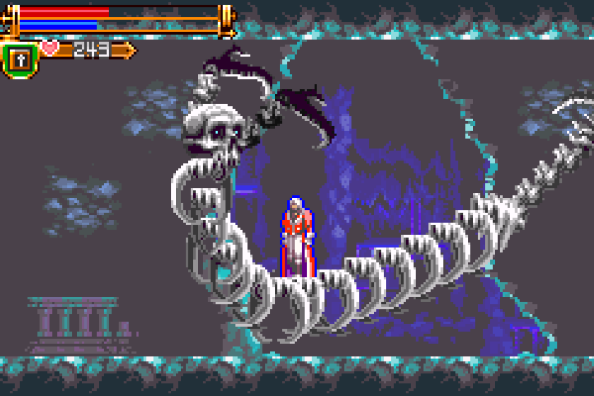 I’d take more pleasure in riding Death like a bitch if he wasn’t wearing his mom’s high heels on his hands.

Might as well kick off this year’s Halloween season with Castlevania game, everyone’s favorite horror series from the classic days of the NES, which has progressively become about as scary as some leftover beans thrown on a compost pile. Rather than focusing on iconic horror, pitting your character against beast after beast from cinematic enemas, the terror-induced colon cleansing films that gave people nightmares before they realized that Hollywood didn’t actually hire a vampire to murder their actors on film, the series has now become a practice in running Symphony of the Night through Xerox machine over and over until the games still play like the original, but the only monstrous quality left is the low resolution, which they have to hide by putting the game on the GBA. But much like the aforementioned beans, Castlevania: Harmony of Dissonance still has value, albeit not for its original purpose.

Harmony of Dissonance opens with the same now-standard explanation that, in a series with over 40 games, the earliest of which is set in 1094, Dracula’s castle appears once every century. I’m just going to assume they mean “at least once” so as to move on with this review without introducing some pointless, confusing, Zeldafied time line. The story begins with the only macguffin ever used in a video game—the kidnapped girl. Personally, I take offense to this idea, and no, it’s not because I need to get my kum-ba-yas on with my feminine side and rail against violence toward women in a medium where violence happens toward everyone regardless of age, gender or the size of their katamari. I just don’t think we really need a reason to go charging into a vampire’s castle with a super soaker full of holy water. Is “compulsive serial murder via oral exsanguination” not enough of a crime? Name one movie where a character says, “Hannibal Lecter might lull his patients into a false sense of security, murder them with his teeth and then eat their liver with some fava beans and a nice chianti, but no judge in the world will prosecute that. Now if he kidnaps a girl, then we have a case.” Part of what it means to be a “monster” is that people don’t have to feel bad about killing it. The NES games used almost no text and still told a compelling story. Symphony of the Night was great…err….let’s say decent…but that was because the protagonist was a monster as well. But trying to introduce a story to each Castlevania game just opens them up to questions like, “Why would the vampire who is constantly foiled by the Belmonts need or want to lure the vampire hunter into his private residence?” That would be like if I left a tray of sugar water near an open window, hoping that a swarm of wasps build a nest in my living room. 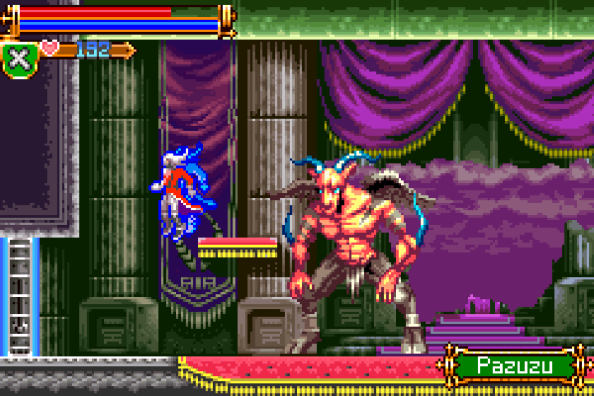 Shortly after this, Pazuzu was called away to pull Professor Farnsworth out of the Fountain of Aging

Okay, so the story has so many plot holes that it’s only good for shredding cheese. But how does the game itself stand up? I would assume with much help from a physical therapist. Harmony of Dissonance plays like a cheap Asian knockoff of Symphony of the Night. It has the same Metroidvania combination of exploration, item collecting, and RPG stats, but it seems tired and worn out in its old age. Sure you find a bunch of items that increase your abilities, but you find a bunch of them up front and then spend a good chunk of the game wandering back and forth through the castle like you’re struggling with early onset Alzheimer’s. To make that worse, the game gives you two parallel, nearly identical castles to explore, with a few common areas between them. Speaking as someone who has grown accustomed to driving with a GPS in my constant line of vision, I felt like I had to check the map way too often to get through this game.

Jesus fucking christ, the feminists are going to be pissed over this one.

Somehow, even though Harmony of Dissonance closely replicated a great game, it turned out to be a disappointing experience, like marijuana laced with ether—it could be the most awesome trip ever, but what does it matter if you sleep through the whole thing? It could be the protagonists. Alucard picked up dozens of useless abilities, like transforming into a dog, something you only ever do by accident while looking for the mist button. But at least they made him more and more vampiric. Juste “Juicy” Belmont—a discount Alucard rip-off who looks like he’s wearing bad Orochimaru cosplay—just becomes more like Mario. “You can jump? Well, now you can DOUBLE-JUMP! And now you can ROCKET JUMP! And now you can break bricks by jumping!” What’s more, Alucard explored a castle. Not a real castle, but at least the regions were named after things you might expect to see in an eccentric Medieval aristocrat’s dwelling, like the clock tower, outer wall, catacombs and coliseum. Justes explores the skeleton cave, the sky walkway and the luminous cavern, which feel about as authentic to a castle as the man cave, the produce aisle and the ball pit. Symphony of the Night had a clever, story-related method to obtaining not just a better ending, but a second half to the game. Harmony of Dissonance requires you to loot the castle for useless crap and shove it into a single room like you’re opening up an Ikea to compete with that lousy merchant who never sells anything worthwhile. (“What’re ya buyin’?” “Potions. Like before. Because your merchandise is crap, I might as well stock up on healing items that break the game.”)

And yeah…this is pretty much how you beat every boss in the game.

As usual, Juicy has full access to (most of) the same sub-weapons that the Belmonts have passed down for hundreds of years. Naturally they’re a bit dated, but in the one seed of originality Konami planted in this compost heap is the magic system. By combining the sub-weapons with spell tomes found throughout the game, Juicy can cast some impressive spells. Of course, the cross is just a little bit stronger than all the others, so once you find one and mix it with the Wind tome, you’ll spend the rest of the game avoiding power-ups with more care than you use to avoid enemies.

So other than the bland environments, the dated weaponry, the discount protagonist, the plot holes so big it couldn’t catch a tuna, the difficulty broken by an excess of healing items, the lame and undiversified abilities, the bosses more from mythology than horror, the excruciating focus on feng shui and…where was I going with this? Who cares? If you need a portable Symphony of the Night, go play Aria of Sorrow instead.