Gary Larson cartoons are not easy to come by online.

I don’t understand horror. Don’t get me wrong, I like it well enough, but when a zombie punches through an oak door that would have shattered a karate master’s arm to the elbow and the people watching the movie with me engage in a spontaneous spelunking into the depths of the couch cushions, I don’t really get the panic. Ghost movies, too. They all use the same, cliched haunting tricks. The room is empty, and the chair moves by itself. Terrifying! Based on popular movies—strike that—based on the crap that Netflix posts because every college student with a camera is so desperate for their homemade found footage film to be seen that they practically give away the rights, you’d wonder why ghosts go through all the effort of returning from the dead to wreak bloody revenge and do nothing more than mess up the living’s feng shui. But then, maybe it’s the rest of the herd that’s gone insane. I remember a creative writing assignment in eighth grade that focused on horror. After a dozen stories about ghosts and monsters and people screaming and running, the teacher read my story—narrated in the second person (“You” instead of “I” or “He/She”)–where the readers find themselves jumping at shadows, alone in the woods. When we finally coaxed the other students to come out of their backpacks, I realized maybe I actually did understand horror.

Breast physics courtesy of CG Animators who have never actually seen a naked girl before.

That issue came up for me again as I tried to justify the $80 price tag of “Haunting Ground.” The game’s pacing ripped along at glacial speeds, the combat is as thrilling as a Gus Van Sant film, and 36-Ds describes both the protagonists breasts and last three years of high school. But at the same time, there’s something unsettling enough about this game about castles, alchemy, cloning, and Frankenstein monsters. I think it’s because it feels like it could really happen.

Normally when someone’s scared, they only lift their eyebrows.

Maybe I should explain. The story follows Fiona Belli, a young girl with a heart of gold, the breasts of a goddess, and the brain of a sea cucumber, who wakes up after a car crash to find out she’s inherited a big, gloomy castle with a definite Luigi’s Mansion vibe. While first wandering the castle, Fiona encounters two things. One, a white German shepherd named Hewie, who takes an immediate liking to the girl, follows her around, and obeys her every…fifth or sixth…command. Second, she runs into a man with the body of Hodor and the face of Smeagol, who looks between her and the doll he’s holding, chucks the doll aside, and with an excited look, grabs his crotch. When a grown man reaches for his junk with a childlike gleam in his eye, you know only two things can come next. Either he’s about to vigorously molest and/or rape you, or he’s about to perform “Smooth Criminal”…and then vigorously molest and/or rape you. Much like in the Clock Tower games that came before Haunting Grounds, Fiona has the combat prowess of Winnie the Pooh, and so the true challenge of the game is not to fight and defeat enemies, but to flee and evade them.

The maid, Daniella, tries to kill Fiona. Hewie Lewis tries to save her with the Power of Love.

Fiona has several options, most of which give way to “run like hell,” which can take anywhere from a minute or two to a half an hour or more. She can order Hewie to attack, which if successful will buy her a few moments to put distance between her and her pursuer, but will more often simply alert her to the fact that the dog has wandered off and is likely halfway across the castle rolling in something interesting that he smelled. (This gets especially frustrating about halfway through the game when, in a cut scene, Fiona manages to get Hewie to leap up a statue and place a key item in a dragon’s mouth, but the fucking dog still won’t come when you call it.) You can kneel down to all the effect that kneeling would help you escape from a real-life stalker in a parking deck, or if you have a good head start and know where you’re headed, you can dive into one of the castle’s…four or five…hiding spots. Each of which you can only use once. If you’re lucky, you’ll manage to shake your stalker, after which you can go back to whichever puzzle you were trying to solve when you were interrupted (Note to contractors: If you ever get a request to build a room that only appears when you insert a statue into a model, or a door that won’t open without three crests, a diamond key, and the death of your trusty henchman, call the cops. Ain’t no one wants that shit unless its for some evil, H.H. Holmes crap.), at which point you’ll likely get interrupted again before you can figure out the solution.

Smeagol, after discovering that Pizza Hut not only delivers, but tastes better than raw fish.

The game is frustrating, time-consuming, and a bit slow paced, but definitely worth playing for the unique and subtle story. I can’t think of another title that doesn’t salt its gameplay with jump scares like it were preparing it for a year-long sea voyage, and none of the villains parade around in viscera like a burlesque dancer from a Saw movie. Haunting Ground relies on a more organic sense of horror generated from tense, creepy situations and semi-realistic villain motives. Your first adversary chases you with an adolescent lust and a poor understanding of personal boundaries. After dealing with him, you find yourself stalked by an older woman who is literally jealous of your womb and feels incomplete because she’s not as young, healthy and fertile as Fiona. Next comes two much older—several hundred years older—men who want to make her pregnant and expect her simply to, well, lie down and take it without putting up any complaint or personal choice in the matter. For one reason or another, every enemy in the game wants you for your womb and doesn’t care what you think. It doesn’t take much in the way of imaginative gymnastics to look at Fiona as the poster child for modern feminism and the pro-choice movement, not for any personal inner-strength she portrays (I’ve seen graham crackers hold together under more pressure than this girl), but for presenting realistic concerns in a way that is understandably scary. 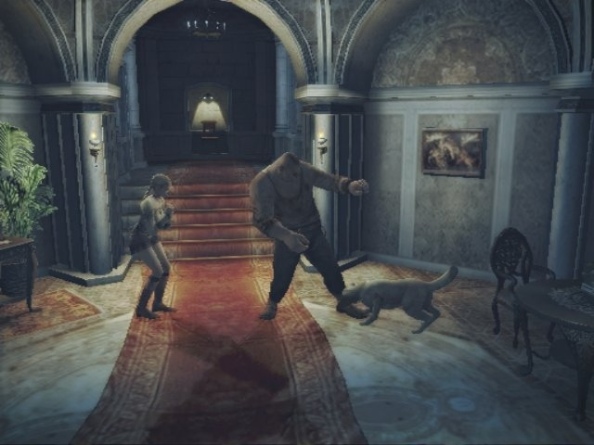 Dog leaps in to save Fiona, who stands there like a confused cheerleader. Meanwhile, Dog comes down with a case of athlete’s tongue.

And it’s all presented subtly. The game gives you a handful of cut scenes, but none of them are as frightening as crawling under a bed and hearing someone walk around the room, only able to glimpse occasional looks at their feet from a limited field of vision. Or hearing sounds off-screen and trying to interpret them—depending on who catches you, the sounds overlaid on the game-over screen can sound like a brutal rape, or an insane woman removing your reproductive system with all the care of a loose tooth tied to a door knob. Items and journals you find, as is common in survival horror, give you some back story, but it doesn’t unnerve you the way that hearing Hewie growl at something in the next room does. Throughout the game you have to keep yourself from losing both stamina and composure, but they’re almost superfluous when the player actually starts to become unhinged while sitting on the safe side of the screen. (Although I did rather enjoy the boss fight where Fiona, Hewie, and the enemy had all lost stamina and spent a good five minutes chasing each other around the room as though they had just been released from the ICU.)

Yes, the game has flaws. No, as far as video games go it’ll probably never rank up with Chrono Trigger, Resident Evil or…I don’t know, what the hell do people like these days? Let’s go with Nintendogs. (Hah. Recycled Family Guy joke.) Fiona is terribly frustrating to control—dear God, woman! Just stomp on his head a few times while he’s pinned to the ground! Or take the maid’s weapon from her! Don’t just stand there wallowing in your own cowardice and likely a few bodily fluids! (Hah. Recycled Futurama joke.) And the dog is even worse, obeying all your commands like an angry teenager just an MIP-scolding away from joining the French Foreign Legion. Probably the most frustrating aspect is the system for crafting items and equipment, in which you essentially have to line up a ten-part slot machine in order to get anything good. (Naturally, the one time I actually crafted a protective necklace, I died and lost the progress)

Oh yeah! I forgot to mention…sometimes the castle just kills you without warning. Save often.

But for the most part, the game is unlike other video game experiences, and the $80 price might actually reflect the quality of story, rather than just Capcom’s lack of foresight and failure to make enough copies for people who would want it.