Trevor and Alucard claim to be the same person, but I distinctly remember seeing them both in the same room together in Castlevania III.

As much as I love the Castlevania games, the series feels like developing a relationship with a teenage boy with an identity crisis. Is it an action game? A horror game? Does it want to try adventuring, or whatever Simon’s Quest was supposed to be. Will it feature classic horror monsters, mythological creatures, or make up my own? I actually rather liked when it started dressing in black, wearing heavy eyeliner, and presented itself as an emo/goth version of Metroid. But it’s also tried on RPG clothing as well. So although I can still fault them for this, I suppose I ought to have expected the new development team would ask “What game do Castlevania fans want to play?” and answered not “Castlevania,” but “God of War and Assassin’s Creed.”

If you’re old enough to get this reference, gently rap your cane against your walker.

In short, LoS2’s story puts you in control of Dracula, formerly Gabriel Belmont, the rebooted series’ patriarch (sorry, Leon) of a famous line of vampire hunters whose career objectives very much exclude “Become an undead demon prince and feed off the blood of the innocent.” However, suicidal games tend to send the wrong message (and really don’t put up much of a challenge), so the development team replaced the final boss with Satan, who apparently has spent the last few thousand years picking up every cliched, convoluted tantrum ever thrown by a Bond villain. Teaming up with his LoS1 enemy, Zobek, a monk who gives off an evil-Professor-Xavier vibe, Dracula wakes up in modern times and fights his way through a setting with very little Castle and practically zero Vania in order to bring down an evil pharmaceutical corporation, which I guess will lead him to the ultimate Evil.

When Kratos–sorry, I mean Gabriel–doesn’t romp through stages filled with mythical monsters, tearing through anyone and everyone he meets and wearing their internal organs as costume jewelry, Ezio–sorry, I mean Gabriel again–plays itsy-bitsy-spider in extended climbing sections that derive player enjoyment from pushing the directional stick in the direction you want to go, then watching Gabriel swing over to the next conveniently placed handhold, completely forgetting that vampires–even in the Castlevania series–have the ability to turn into a bat and fly. Like Kratos and Ezio, Gabriel lumbers along in a hulking slouch, doubled over from the body suit of extraneous muscles he totes around. This sack-of-testosterone design seems to have taken over character design, presumably to appeal to the modern breed of misogynistic he-man wannabe gamers, but belonging to the old school breed of nerdy, sports-hating 1990s gamers, I find it hard to control someone like Ezio Auditore and not picture a guy in a big white hoodie trying to waddle around in Jncos.

Out of all the game comparisons I could make, God of War and Assassin’s Creed aren’t exactly the equivalent of calling LoS2 “an overcooked casserole of coding leftovers baked from meats that were rancid the first time around.” For the game to deserve an insult like that, it would have to merit a special level of bad comparison. Like to the stealth sections of Legend of Zelda: Phantom Hourglass. While most players find gimmicks like quick time events as pretentious bribes to make people think they can interact with the game, forced stealth sections such as in Phantom Hourglass and LoS2 actually blow holes in the plot so wide you could actually build the next Castlevania game inside of it. The idea of an enemy that can’t be fought ever takes a lot of the luster out of Satan. If, by the end of the game, you can kill the King of Hell, the Prince of Lies, and the source of all wickedness and Temptation this side of Oz, but still can’t risk being seen by a low-level goon for fear of a flash-boiling from their flame throwers, why aren’t the goons in charge? Or at the very least, why wouldn’t Satan force you to fight them? Yes, it would ruin the game and render it unbeatable, but maybe the developers should consider that for a good long while. And I can’t even decide if that actually improves on the extended stealth section in a garden full of crunchy leaves, after which you do fight and destroy the boss who was hunting you. I guess Konami really loved its sadistic idea to put bells in the fight, like the Garradors in Resident Evil 4. I shot a projectile to ring a bell, darted the other direction, and had a brief vision of a giant hoof in my face before having to restart the level.

It looks bad, but he actually just won the pie-eating contest from “Stand By Me.”

While I always wondered why Bowser didn’t simply dig an uncrossable pit of lava with no platforms, Castlevania places Dracula partly in his own castle, explaining how he can traverse some of the more convoluted architectural choices, such as every door, monument, mechanism, and hidden bonus requiring his personal blood sacrifice to activate. Once, however, I got turned around, and had to cross the same bridge three times in five minutes. As it required a blood sacrifice each time, I can’t help but think that even a vampire might get a little dizzy. I would have to imagine Dracula has a pretty dangerous morning routine, gnawing open his wrist to flush his toilet, then trying to make toast, but needing to squeeze out a few extra drops when the toast comes out black the first time. The fact that he could easily fall into a river of fire if he gets a little woozy makes me think there could have been a simpler design for his home. Still, it almost feels like a reasonable option in this world, since characters constantly projectile vomit enough blood to put out a burning building faster than the New York City Fire Department during a tsunami.

Alucard, who reversed his father’s name in order to oppose all that Dracula does, turns out to be more helpful than a boy scout.

One thing I can say about Castlevania: Lords of Shadow 2 is that it has boss fights. Lots of boss fights. I can’t really say whether this improves the game or not. Some of them have a really inspired design to them, such as the obligatory end-game fight with Death. Others just feel like “press square until the monster dies.” During one fight, the boss encased herself in a hamster ball, which I had to pound mercilessly with a weapon slower than a tortoise with down syndrome, without pausing, while she and her two minions pressed their attacks. Even when I turned down the difficulty to “easy,” I could only beat this one by getting lucky. Early in the game, I spent over an hour fighting the gorgons, trying to figure out the convoluted button combinations required to throw an ice bomb. As a result, I have a few suggestions for any would-be game designers in my audience: the option to shut off the QTEs? Brilliant. Shutting off stealth sections would have been preferable. Even more so, not programming stealth sections in the first place. But one thing you really need to stop doing? Having bosses repeat phrases during battle like Dora the Explorer’s map. 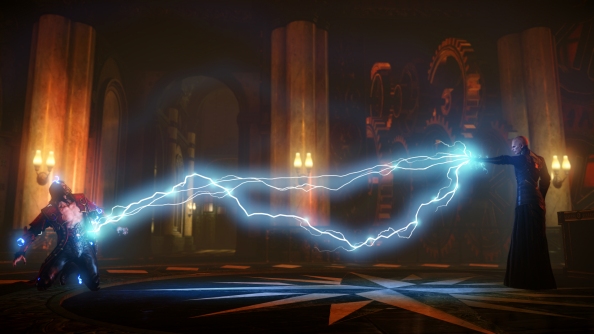 Shortly after this, his father Darth Belmont comes to his aid.