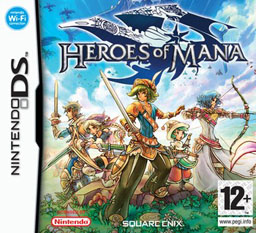 My latest foray into addictive time-killers is Angry Birds: Fight, which has glued me to my phone every time I get two minutes not immediately filled with something stimulating and exciting. Like many free-to-play games, it offers me rewards and bonuses if I consent to watching ads that try to pitch more free-to-play games which will inevitably offer me more chances to watch videos pitching more free-to-play games until they’ve saturated my time so badly that we repeat the 1983 video game crash while everyone on earth stares at their phones in wonderment of games that could be way more awesome than the games they’re currently playing. Alas, as much as I’d love to bemoan the commercialized state of affairs of modern gaming, the game industry has historically been as all-about-the-art as Donald Trump’s hair stylist. (Low-hanging comedy fruit, I know.) If you don’t believe me, pick out your favorite franchise, and ask yourself how reasonable it is that the in-game world undergoes drastic geological cosmetic surgery from one installment to the next. Sadly, the evidence that developers slap franchise names on games to help them sell stacks up like a life-sized Jenga tower, ready to crumble under its own weight and concuss you with its logs of disappointment.

If I could brand any game as such a “log,” Heroes of Mana would be a prime candidate. The game brands itself as an RTS, and while I have no qualms with the “RT,” I have one or two suspicions about the accuracy of the “S.” Set in the Seiken Densetsu…category on amazon…Heroes of Mana uses monster design from Secret of Mana and themes from other Squenix failures in development at the same time. Otherwise, the game plays less like a Mana game and more like a (very) rough draft of Final Fantasy XII: Revenant Wings using Mana artwork.

The story…well, they say if you put a bunch of monkeys in a room hacking on typewriters, they’ll eventually produce the complete works of William Shakespeare. Assuming that’s true, the monkeys will produce the Heroes of Mana story long before they ever crank out something mildly resembling a sonnet. Roget, first mate of the Night Swan, his captain Yurchael, and an assortment of poorly written anime stock characters (including such favorites as eternally optimistic cutsey girl and grim mercenary with a conflicted past) crash in the wilderness after realizing their own leaders set them up. Why they villains fitted the Night Swan with a mafia-esque car bomb, the game never really explains, but that fear becomes a self-fulfilling prophecy as our intrepid heroes vow to halt the evil they suddenly assume must exist. Blah blah blah, plot lines in and out, a character who gets his ass creamed like chicken soup every time he shows up but somehow manages to inspire fear in the heroes, convolution at its finest, more characters than a story really needs to follow over the course of 27 battles…and one of the monkeys writing this thing must love cliches, because near the end they pull a Luke-I-am-your-father moment, which Roget (and the players) shrug off with a hearty disinterest. In the end, nothing is accomplished. Evil may have retreated, but no one knows or cares why, and the player moves on to story that makes more sense, like Moby Dick, or the United States Tax Code. 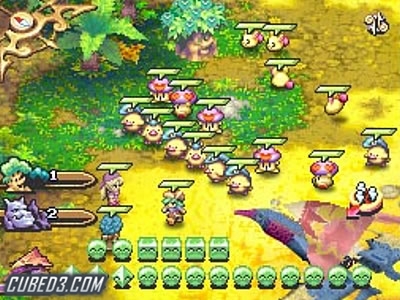 This RTS game gives you multiple ways to strategically send all of the same type of monster at your enemies.

The gameplay follows a typical real-time strategy format, as long as that strategy is “select characters, attack enemy.” Units have a four-way rock-paper-scissors (rock-paper-scissors-lizard?) relationship going on, with a handful of units existing outside that structure. Ranged deals double damage to flying, flying deals double to heavy ground units which deal double to light ground units, and each time they introduce a new type of unit, the game puts you through the entire explanation again because when it comes to rock-paper-scissors, you have the brain of a goldfish, but when it comes to following the story, you are Albert Einstein performing a Vulcan mind-meld with Sherlock Holmes. Disregarding tutorials more repetitive than the ones from Dora the Explorer, I initially thought the four-way relationship sounded interesting. Unfortunately that all falls apart when trying to decide which units to purchase with your finite resources, as there’s no way of determining what type of unit your enemies are; just because they don’t stand on the ground doesn’t mean they’re flying units, and the fact that they can hit you from three squares away doesn’t qualify them as ranged. Heroes of Mana is just a dimmed DS screen away from being both literally and figuratively a stab in the dark.

Like Revenant Wings, you summon monsters to do your dirty work for you. The monsters don’t level up, but you get stronger ones as the game progresses. You also have a separate party of “leader” units, consisting of the fifteen characters seen in the story, all of which interact with Roget for a battle or two, then join your party and shut the hell up like a good subordinate tag-along. These characters don’t level up either, but you can win equipment in battle to boost their stats (naturally giving all of it to the same five characters who seem mildly more interesting than all the rest),  which makes as much difference in the long run as giving yourself a concussion to raise ALS awareness, because you’ll never take them anywhere near the fighting, since losing the main character results in an instant game over.

But even holding back characters like that is not a guarantee that they won’t charge headlong into the melee with their lone hit point ablazing. Of all the virtues of the NDS, screen size is not one of them, and trying to select characters, pathways or enemies to attack has all the finesse of a figure skater with the motor skills of an infant. Furthermore, since friendly characters refuse to step to one side of their square or to do that awkward thing people do in movie theatres and on airplanes where they try to make themselves as skinny and flat as possible to let people through, pathways get blocked easily, leaving the AI to take the scenic route around the battlefield, detouring right through the enemy camp. Even without clogged roadways, the AI has the IQ of George W. Bush with his head stuck in a plastic bag, often sending peaceful resource-gathering monsters on roundabout ways past hostile enemies, or telling dying characters to get three or four more parting shots in before retreating from the enemy currently making haggis out of your bowels. 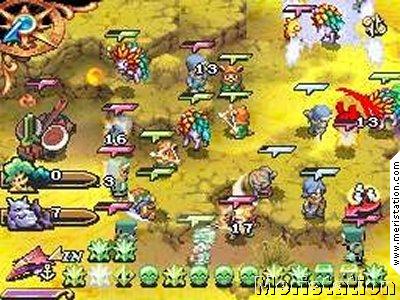 Precision tuned to let you follow all the action with only moderate permanent damage to your visual accuity.

There is one more feature to combat, summoning benevodons (the latest in asinine wordplay added to the World of Mana) to damage every enemy on the map. These are impressive attacks with exciting animated cutscenes that you will never use nor see (respectively) because they take up so much of your resources that in most battles you’ll never collect enough for the summoning. I pulled them off once or twice, mostly out of necessity rather than choice, and they all have pretty much the same effect, making them another nice attempt, but ultimately pointless addition to the game.

As usual, I like to include a “but the game’s not worthless!” section here. I did enjoy the game for all its flaws, and preferred in infinitely over Children of Mana, released at roughly the same time (and featuring the lame benevodon and malevodon wordplay…which mean “good tooth” and “bad tooth” respectively). As mentioned before, it reminded me of a draft version of Final Fantasy: Revenant Wings, so if you liked Revenant Wings…go replay that game instead of Heroes of Mana.