Note: Gamersgate supporters would like to see less of this.

Back in the late nineties when Squaresoft could do no wrong, they made a bold move by backing away from Nintendo in favor of Sony. This meant two things for me. One, I had just blown my entire finances on an N64 and they had just rendered that purchase useless. Two, they now had virtually limitless room for bigger and better games. So when I finally gathered enough pop cans out of local garbages and exchanged the sticky, tobacco-ridden gold for a Playstation, I had to resort to begging for games for Christmas presents. When I popped that disc in the little gray box and hit power on Christmas morning (fuck baby Jesus! I’ll go to church when he’s earned enough EXP to unlock his parasite powers!), I met Parasite Eve, and thus began a lifelong relationship with a game that would inspire me to piss off my high school teachers with endless questions about the motives and abilities of mitochondria and at least one major research paper on spontaneous human combustion. 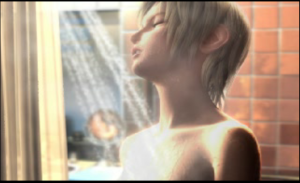 “Full Frontal” must not translate well from Japanese.

So when Square announced not only a sequel, but a sequel with a full-frontal shower scene (some people may have exaggerated certain reports), naturally I…had no cash and put off buying the game indefinitely. I really do wonder why I put off the game this long. But I finally got my hands on the working game, and now for your special Halloween article, I present “Parasite Eve II, or Resident Evil, Symphony of the Night.” The rumors I heard involve an all-out, knock-down, out-for-blood difference of creative opinion, with the director of the first game wanting an RPG detective story with the development team wanting to do something more like Resident Evil (I will update if I can find a source confirming). While the director seemingly won the first game (one imagines with a level-68 meteor spell while under a protect charm to ward off 9mm bullets), the development team apparently zombified him for the sequel, as the game reads so closely from Resident Evil’s play book that you can practically see the scribble marks over “T-Virus” right beside every mention of the word “mitochondria.” A rip-off this blatant could even garner plagiarism accusations from Terry Brooks. 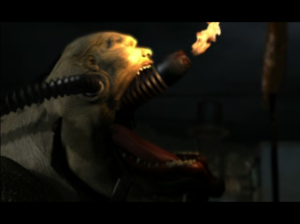 Apparently, Mitochondria can write flame throwers into your DNA.

The story follows Aya Brea, the most drop-dead gorgeous survival horror protagonist I wouldn’t want to meet in a dark alley, three years after saving all of humanity from rogue microscopic organelles with murderous intentions and ambitions of world-domination. Despite the fact that the first game wrapped up all loose ends nice and tight, mitochondria still occasionally alters the DNA of people and animals because if they didn’t, well, the sequel wouldn’t make sense, would it? Aya has pulled a Leon Kennedy, leaving the police force to work as a government agent. Her boss sends her to investigate the town of Dryfield, where she discovers an abandoned underground laboratory dedicated to replicating neo-mitochondria. Oh, what horrors of dialogue writing will she face? What plot holes might she fall into? Stay tuned to find out!

Are you my mummy?

The game plays well, let me say up front. Rather than borrow Resident Evil’s raise-the-gun-and-hope-for-the-best method of aiming, Parasite Eve 2 introduces a lock-on method of aiming, which allows you to point your gun directly at whatever you want to die. You can even see it, too…if the enemy hasn’t wandered out of the pre-rendered camera angle. Battles also have a more realistic flow than in the original game. Granted, from a game play perspective, PE1‘s combat system worked nearly flawlessly. However, it did take a leap of faith to understand why Aya always felt the need to step back and re-evaluate her strategy/situation/life between attacks. PE2 lets her pull the trigger as fast as the bullets come out of the gun.

PE2 drops some RPG elements from the first game, including leveling-up. Throughout the game, guns simply don’t get stronger, and Aya can’t suddenly take a shotgun blast to the face without flinching. On one hand, yes this makes the game more realistic, but assuming most people bought this game based on the merits of the original storyline where a flying opera singer with a velociraptor claw for a lower torso recruits your microscopic organisms to turn traitor and set themselves on fire, I think the target audience only cares about realism to a very small extent. Sacrificing game play for that element of realism may have about the same effect of eating tree bark instead of pasta and expecting health benefits from the all-natural ingredients. It may make you feel good at first, but in the end you’ll find yourself with significantly less health after taking damage in a cut scene. Right before the final boss. Seriously. Fuck you, game. 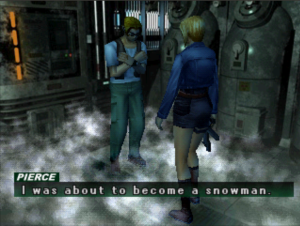 Then I could do what all snowmen do in summer.

This element of realism grows a little murky when calling in to save your game for the first time. PE2 still uses phones as save points, but feels the need to put someone on the other end of the line, and every time you find a phone, after standing there wondering if it dials out (while the player watches, wondering how Aya ever passed high school, let alone her NYPD exams and field tests), we have to listen to the commentary of the NPCs, like a Greek Chorus of Nitwits repeating to the player what we already know. Especially astute players and their walkthroughs might access a minute sub-plot about a mole in the agency, but this proves about as vital and interesting as a pile of toenail clippings. Anyway, the first time you call in to save, your boss authorizes you to use weapons and armor you find on corpses. Thanks chief, but won’t I make the dead guys happier by dying myself rather than taking their stuff?

Bad writing plagues this game. Resident Evil often stitches together stories by ripping pages out of dime store sci-fi novels and pressing them together in whatever order they fall, but next to PE2, Resident Evil rises to the quality of Dostoyevsky. Characters speak in unnatural, stilted dialogue, like a troop of actors who all simultaneously forgot their lines, the premise of the play, and everything they learned since the third grade. Aya, one of the most awesome, badass protagonists of all time suddenly feels the need to flaunt her girliness by criticizing the P.I.’s outfit and telling us about the clearance sale she visited the previous weekend. And let me tell you, nothing builds up to an exciting climax of an epic survival horror game like a series of long, boring cut scenes filled with exposition that won’t matter thirty seconds later. 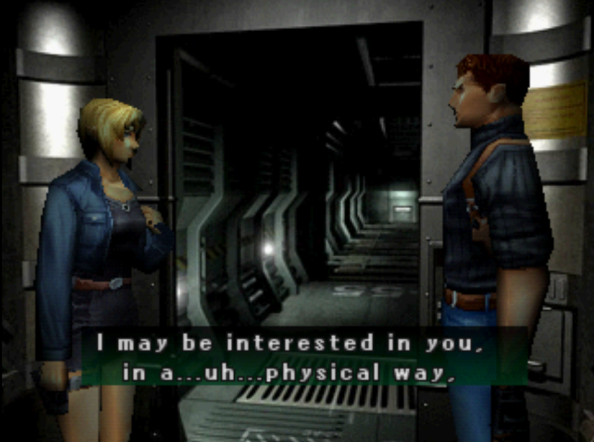 Smooth. On the upside, I no longer feel as bad for some of my failed attempts at talking to girls in high school.

The original Parasite Eve showed a lot of effort in writing. They showed us a connection between Aya and her antagonist, which made their final confrontation meaningful as more than an obligatory battle. The story gave her doubts and personal conflicts. PE2, on the other hand, refers to the primary antagonist as “the big guy,” and he never takes off his army mask. You don’t know his identity or his motivations, much less how he connects with Aya or the events of the previous game. They introduce a private investigator as sort of a love interest, but they have even less chemistry than Leon and Ada in RE2, spend almost no time together, an remember how I said you lose HP in the cut scene before the final boss fight? Yeah…spoiler alert…he shoots Aya. In order to earn the trust of the villain that he betrays in the same cut scene. But no biggie, right? ‘Cuz he’s a hot guy. What else does he need?

I try to get away, but something irresistible just keeps drawing me back.

The game doesn’t suck. Completely. Although I maintain that RE-style walking controls never helped anyone and feel even clunkier here where Aya automatically tries to reorient herself towards her target enemy, thus constantly steering her slightly back towards any enemy she needs to escape. The overly simplistic weapon customization system pales in comparison with PE1. And the puzzles, while they earn bonus points as interesting challenges, might offer too much of a challenge for someone who just wants to get on with the game, thus making a walkthrough necessary for completion. But I did play through the game twice (even though the New Game Plus option gives you nothing worthwhile) in order to get both the bad ending and the…well, still bad, but longer ending. 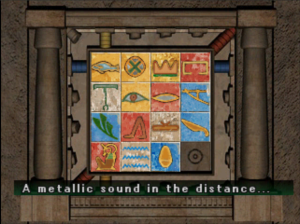 I guess the “good” ending best sums up the obliviousness of the development team. A year after Mr. Sack-of-Flour Personality disappears, Aya visits the Museum of Natural History in New York–because when Alan Grant needed to relax, he spent some time on Isla Nublar–and the doors burst open behind her to reveal the Private Investigator, and I couldn’t find myself caring less about this bland, poorly written douchebag who shot me right before the final battle. Kick his ass to the curb, Aya! You can do better than him, and you have a birthday coming up…