The series employs many rooms shaped like this because you damn well better start from the far left side of the screen!

So I’ve gone roughly twenty months on this project, but I’ve only written about one of my favorite franchises–Mega Man–once. But do you honestly need any more than that? Capcom released six main titles, each with a Game Boy spin-off, then moved on to the Mega Man X series, changing at most a handful of tools and the line-up of characters. If any series epitomized the “If it ain’t broke” philosophy more than any other…well, Madden, FIFA and all those sports games pretty much nailed it. But Capcom did it first. And as an added bonus, Mega Man has the advantage over Madden in that you can’t easily turn the game off and go fight a legion of evil robots, taking their weapons as trophies like an Assimovian serial killer. But as the first rule of robotics doesn’t preclude the murder of other robots, our favorite blue Dexterbot has free reign–even permission and justification–to slaughter all the bad people-bots in order to save humanity. And he does, but much like his human counterpart, Mega Man faces the challenge of killing over and over again without going stale. To that end, we get Dr. Albert Wily, mad scientist extraordinaire, modeled after Albert Einstein and inspiration for Albert Wesker. As a human, Mega Man can’t harm him, which gives him license to keep throwing robotic Batman-villain rejects our way until contentment dawns on our 8-bit faces or Capcom gets bored and suddenly stops producing the games in favor of Resident Evil. 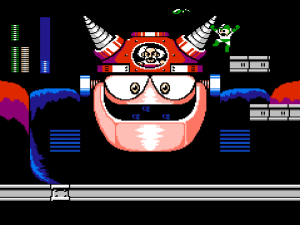 Yep. You totally beat the final boss by dropping snakes into the cockpit with Dr. Wily.

The story behind Mega Man 3 tries to preemptively answer the question of why Dr. Light keeps pumping out deadly robots if Dr. Wily will only steal them and reprogram them for evil. Well, fortunately Dr. Wily has “found his sanity,” to quote the instruction book, and has teamed up with Dr. Light to work for world peace the only way they know how: by constructing the largest, deadliest, most powerful robot the world has ever seen. That’ll keep everyone safe. However, a new batch of robots has appeared on mining worlds, holding the 8 macguffins required to get the new peace keeper up and running.  Light believes some anonymous “lunatic guy” has ordered these robots to steal the energy crystals required to activate the peace keeping robot, Gamma. Jeez, Dr. Wily, didn’t you just find your sanity? Maybe you could lend to this situation your expert advice which we obviously know contains no trace of mental instability whatsoever.

Fans have long considered Mega Man 2 the pinnacle of the series, and I really have to agree. The game introduced a number of features that fans had never seen before, but apparently would never reach the same quality again. Except Mega Man 3 improved upon everything. How does that work? Good question! Let’s start with the original Mega Man. For those of you who haven’t had the luxury of living in Asia, I should explain that Rock-Scissors-Paper games constitute an iron clad and legally binding contract between anyone under the age of 20. Drawing on this, the first Mega Man introduced this principle in the form of a guy who chucks scissors at you from his forehead, who goes down pretty easily if you’ve already beaten the guy who gives you the power to hurl rocks back at him. But since “Paper Man” sounded lame even on his own medium of attack, and a three-level game didn’t quite justify the $50 price tag, they had to beef it up a bit. So you might imagine Capcom designed themes for their robots, carefully crafted around well-balanced and clever real-world principles…just kidding! They went for the cliched trifecta of video game alchemy; lighting, fire and ice.

So in Mega Man 2, they went all-out with the alchemy, what with water dousing fire, fire burning wood (actually the combination of Earth and Water, but hey, who actually follows alchemy these days?), wood…I don’t know…filtering air? And then the other four robots. Except that metal guy looks like he’d do a number on wood man. And bubble lead somehow damages the time-stopping robot. So that game turned out a mess in the rock-scissors-paper department. Mega Man 3 tried to restore the feeling of one weakness per enemy. Except to keep it interesting, they made two separate circuits of weaknesses, ensuring you’d have to fight at least two bosses with just your mega buster. 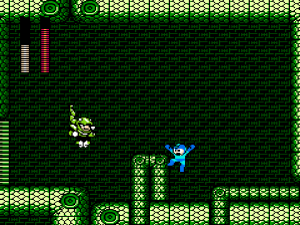 Capcom won an award for the design of Snake Man’s stage. Then blew it by making the boss look like a green sperm with legs.

Furthermore, this game marks Capcom’s foray away from the usual fire- and ice-themed levels. Instead, we get the dark, starry world of Gemini Man or the ninja-bot, Shadow Man.  One might question why anyone built robots around these ideas. The original six robot masters all had some constructive purpose to society. I can even think of some useful, productive ways to employ Mega Man 2 robot masters. But Gemini and Shadow Man don’t seem very helpful, and then…well…Top Man. Yes, this game introduces the Slippy Toad of Dr. Wily’s minions, Top Man. Who spins. And throws tops. After defeating him, you get the top spin, a weapon so difficult to use that I often deal more damage to myself than the enemy I hope to target. Seriously…I hate this guy so much I just want to punch him in the face! Wait, what? You defeat him by punching him in the face? Excellent! Who do I get that weapon from? …Hard Man? Did anyone at Capcom think these names through all the way? Seeing as how he appears in the same game as Snake Man, I’d say someone on the development team had just a little too much inspiration from bad porn.

Doc Robot gets wood. Really, did no one think this through?

The game also rectifies the too-awesome-to-use trope among games where you collect items. None of the weapons has a limited number of uses–you can always replenish them by camping out in front of a giant penguin or something. However, these weapons usually take too much effort, and simply blasting through levels with your arm cannon provides the quickest and easiest way to the end. In Mega Man 3, rather than going straight to Dr. Wily’s castle after fighting the robot masters, an enemy called Doc Robot appears. With as much bearing on the plot as Arwen in the Lord of the Rings films, Doc Robot merely gives you a chance to use your weapons more. He inhabits four previously conquered stages, although he alters them drastically. Facing you twice in each stage, he adopts the attack patterns of all the Mega Man 2 bosses. Because Mega Man hasn’t, apparently, proved that he can mop the floor with all of them. Meh.

Having a little more relevance to the story, Mega Man also faces off against the supposedly mysterious Proto Man. Of course, if you’ve ever heard the term “Proto” before, the figuring out his identity has all the challenge of pouring a glass of water. He appears in several stages, usually to fight a few rounds with Mega Man. Ostensibly, he does this as a test, but while certain things–such as practicing for the SAT–might help you out just before going in for the real thing, you may not want a practice bout against Mohammad Ali ten minutes before the fight. Unless, of course, you can move faster without all that cumbersome blood. And really, doesn’t having perfect vision only dull your other senses? Proto Man couldn’t come off as more of a dick if he had actually sided with Dr. Wily. 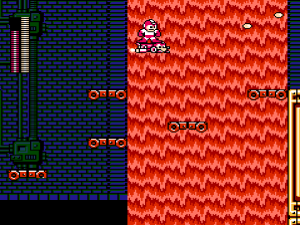 Also noteworthy, Mega Man 3 introduces a new series staple, Rush. Taking the place of the items from the previous game, Dr. Light built Mega Man a dog that can morph into vehicles to increase your mobility. Rush makes a good companion; he does whatever you ask him to, never gets in the way, and he doesn’t poop so you never have to worry about where you step. Each of his three functions–two of which you obtain after beating certain bosses and the other you have from the get-go–increases your mobility, allowing you to spring to new heights, soar over dangerous ground, or swim through that one patch of water in Gemini Man’s level. So maybe the implementation could have used some more thought, but did I mention he doesn’t poop? That puts him ahead of a real dog in my book.

Otherwise, if you’ve played any game in the series, you should know what to expect. Run, jump. Enemy robots. Pew pew pew. Pretty standard stuff.