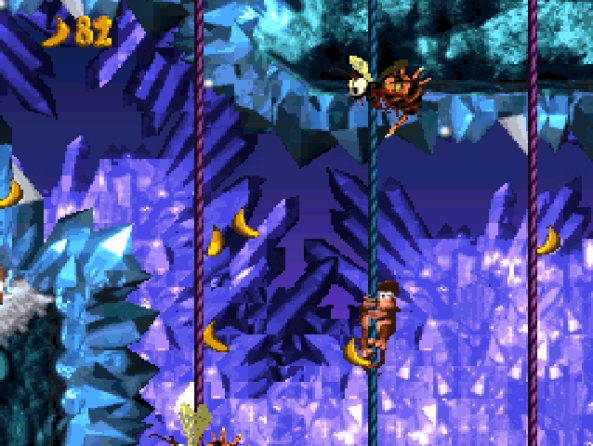 Between applying for PhD programs, Evil Dead: The Musical performances, and preparing for next semester’s classes (while this post says “January,” I actually wrote it about the day my Evil Dead: Hail to the King entry posted), I’ve had just enough time to glance longingly at the pile of 20+ books that I may some day have a chance to read. Sorry to say, my to-do list requires a few sacrifices, but rather than ritualistically stabbing my Playstation until my hands run wet with sticky, electrical discharge, I opted to suck up my pride and whip out a platformer, under the assumption that the pain, at least, wouldn’t last long, and I could count on the popularity of Donkey Kong Country to garner a few more views per week than normal. Sadly, I think the entirety of this paragraph might tip my hand a little prematurely, but before you all start chucking barrels at me, I promise to remain as objective as I can. Even if game reviews inherently rely on subjective analysis. 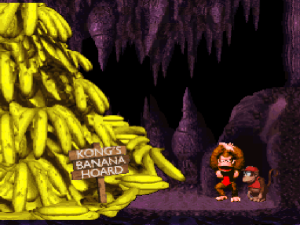 Congratulations. You’ll have more use for them than the Kremlings. But 99% of them will still rot before you can eat them. An illustration of wealth distribution in Ape society.

Anyway, Donkey Kong, after a ten-year hiatus in which he realized Mario had turned to completely lavish his attentions on Bowser, returns to his home island. However, Donkey Kong Country has its own reptilian antagonists, and they want bananas. Yes, for some reason, a crocodillian race of carnivores has need for a cavern full of bananas and will fight to retain their plunder from its rightful owners, a family of five apes who likely couldn’t eat that much fruit before it turned black and shriveled up anyway. So Donkey Kong and his nephew Diddy Kong–whom he finds stuffed into a barrel like he hadn’t paid his protection money to the crocodile mafia–set out on a banana-hunting quest, taking a path so roundabout that it would only make sense in an action platforming game. 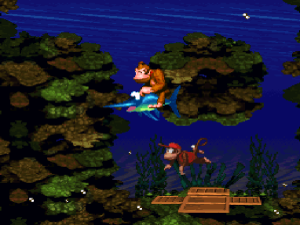 Through my first impressions of the game, I reasoned that while Donkey Kong hadn’t participated in the Mario games since 1983, he at least spent a good deal of time playing them, and has learned much specifically from Super Mario World. I’ve established his cold-blooded baddies already. Much like Mario, DK takes out the majority of opponents via massive head trauma. When he can’t bring the full weight of a 300kg gorilla down on their skulls, he can throw barrels at them, a move clearly taken from the original game, but vaguely similar to Mario’s koopa shell kicking. Both Mario and DK travel from level to level through multiple zones of their respective islands. They can take up to two hits with appropriate power-ups–if we compare Diddy to an amanita mushroom–and collect either 100 of something, or a small number of level-specific items to get an extra life. They also ride animal pals–four of them–who each have unique abilities. They both shoot themselves out of cannons and find secret rooms with bonus games. Rare simply changed the characters, maps, and artwork from Super Mario World and called it a new game like an electronic Sword of Shannara, hoping we wouldn’t notice. 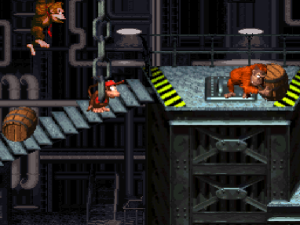 An illustration of Karma in Ape society.

I don’t like platforming games and really can’t pretend to hide that. Years ago, before Final Fantasy VI introduced me to RPGs, I did play my fair share of Mario, and I’ll even admit that an afternoon playing Super Mario Bros. at Danielle Lehto’s house in first grade introduced me to a lifelong meth-style addiction to video games. But the idea of running through levels trying not to touch monsters except on their heads, all the while avoiding the plummet into bottomless holes appeals to me about as much as the thought of telephoning strangers at 11:00 pm to bring them the word of Lovecraft and convert them to the Cult of Cthulu. Simplicity, repetition, and pointlessness don’t make for great selling points, and much like religion, if you didn’t grow up with it, platformers just provide a tedious, time-consuming practice of learning thoughtless, reactive patterns with very limited returns. 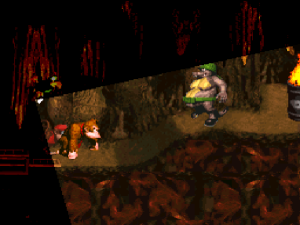 I’ll call him “Bright Eyes.” Comment if you get the joke.

Having said that, I recognize you may not agree with me. In fact, I know a lot of people out there think that nothing epitomizes enjoyable entertainment like trying not to fall into holes. If you like this, if you want to find a game with simple, bland gameplay that lacks all the cumbersome issues of a well-written story and the addictive, rewarding noises, flashes, and rewards of an iPhone game, then yes, Donkey Kong Country might deserve the 9/10 stars reviewers commonly give it. If you like Mario, you might want to try it. It does differ quite a bit, though. Rather than a hub design, DK Country lays out its world map like an air-travel montage from an Indiana Jones movie. Most levels run exclusively from left to right horizontally. They have multiple hidden bonus rooms, but no secret endings or branching paths. Some have stage-exclusive gimmicks like fueling up a moving platform, turning on lights, or traveling with a parrot holding a flashlight.

Donkey Kong and Diddy supposedly have different skills. Diddy can jump higher and farther–but still can’t quite make it to the hard-to-reach barrels and items. Donkey Kong supposedly has more strength, but has to jump on most enemies just as often as Diddy. Occasionally I stumbled across an item located deep down in a hole with absolutely no clear method of obtaining without winding up as donkey guts on a rock somewhere. For these, I took a few leaps of faith before converting to Donkey Atheism. I suspect the secret involves some of these character skills, but I didn’t have the patience to keep replaying levels just to figure out the puzzles. After a while I found an enemy that Donkey Kong could kill that Diddy couldn’t, but using this to proclaim uniqueness of character falls under the same category as trying to sell a new model NDS on the virtue of an upgraded picto-chat. 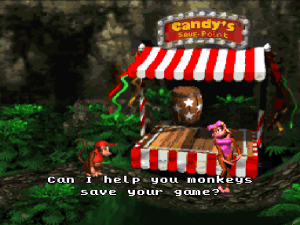 Due to Donkey Kong Country’s incredible simplicity, I can’t really find much to say about it. People love this game, but I don’t see it, and while I find alliteration light-hearted and cartoonish, whenever someone starts converting Cs into Ks for such a purpose, I generally eye them up with the astonishment I’d give to a banjo player performing minstrel tunes in blackface. Rare didn’t provide the easy access to save points that Mario has, but a skilled player could probably recover Donkey Kong’s entire banana hoard in two or three hours, coincidentally the same length of time a fresh banana in my possession usually takes to turn into a brown slimy pulp.