Thank god they fixed this! Why, I could almost hear the fabric of society bunching up around my nethers!

“They say words like ‘hell’ and ‘damn’ in it,” my friend John told me about Final Fantasy VII in ninth grade. This sums up the major features of the game quite nicely. Sure, at the time it came out, people hailed it as a demonstration of the cinematic powers of CD-based game consoles, but anyone who played it knew that it really demonstrated Tifa’s enormous rack as it jiggled like two shopping bags full of Jello when the explosion at the northern crater shook the Highwind–the game also demonstrated what Squaresoft could do when not oppressed by Nintendo of America’s horribly oppressive censorship requirements. 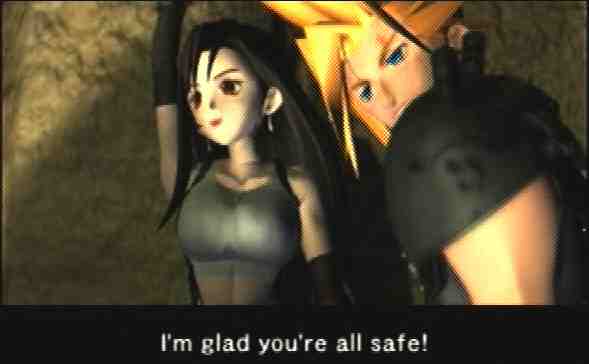 …Cloud, on the other hand, looks like he’d prefer some private time.

Final Fantasy VII almost needs no summary. Everyone knows about it by now. It changed the video game scene; believe me, I took weeks to decide whether I’d say that or not. People have made that claim about FFVII all over the internet–as they have about FFIV, FFVI, FFX and just about any new piece of technology that comes out. If you locked me in a room with ten dozen donuts, you wouldn’t especially look at the first one I ate and credit it with having special sprinkles with the power to break my will; it would have happened eventually.  However, the events surrounding the game’s release did successfully allow a number of things to happen.  Well, mostly it only took Square getting royally pissed at Nintendo for not giving them a CD-based console to work with, so that let them make the switch to Sony, which propped up Playstation as a major competitor in the market, leaving Nintendo wallowing in the dust trying to figure out how to entice their customers back without actually offering any good games.

Still, I’ll concede that not everyone reading this has played the game, so I’ll sum it up: The multi-conglomerate Orwellian corporation known as Shinra, or in short, “Big Mako” have discovered an energy source even better than the sludge left over from decomposed corpses–the souls that used to inhabit those corpses.  Pulling the spirits of the dead out of the planet, they compress them and convert them into electricity so people can play video games (among other things), which naturally pisses off the local hippies.  Except rather than a skinny little white guy with a guitar and bloodshot eyes, a seven-foot tall powerhouse of a black man with a machine gun grafted onto his arm leads them, along with his double-D companion, Tifa, and her brooding, stormy, anti-social childhood friend, Cloud. Their game of cat-and-also-cat ends when one of Shinra’s old mistakes–a genetically engineered super-soldier with the DNA of an ancient monster sent to destroy the planet–arrives and plants a Nodachi two meters long into the President. Yada yada. Sephiroth burned down Cloud’s and Tifa’s hometown and now plans to destroy the planet, Cloud and his friends stop him.  The game ends, and the player looks up pictures of Tifa’s breasts on the internet.

So what do you think…they look fake, don’t they?

Although I joke about Tifa and her apparent fan following of CGI Animators on redtube, I truly believe in the necessity of adding a character with a large amount of sex appeal.  And not just her, but also Barret, his constant stream of profane tough-guy talk, his place as the only black guy in the entire fantasy genre except for that one dude from the Neverending Story, and the subtle gay vibe between him and Cloud.  Also, the comical string of obscenities that Cid spews forth could scour the rust off a car.  These things indicated that Squaresoft wanted to treat their audience like adults.  Games have aged since Donkey Kong, and so have their players; gone are the days of staring at Celes’s 16-bit pixilated sprite and trying to imagine something a little more photo-realistic.  I love the whimsical nature of those early games, but people actually seem to live in this world. Characters have speech patterns and dialects and everything.

Furthermore, in designing the combat system, Squaresoft took this notion of well-developed, distinct characters…and chucked it right into Ifrit’s hellfire. Custom characters have long attracted players to the Final Fantasy series. Games like Final Fantasy IV gave us special abilities like Kain’s jump or Rosa’s pray. Three and five (and later Tactics) allowed characters to learn skills permanently to equip in specialized combinations. Six mixed that, with character-specific skills and the ability to permanently use magic and raise stats. So naturally, we would expect something brilliant and revolutionary, now that we have 32-bits to utilize, right?

Nope! Forget all that–it all boils down to materia.  From the beginning of the game, any character can equip any materia–crystalized mako energy containing the knowledge of the ancients–which can let them cast magic, summon monsters, perform special abilities, augment other materia, or raise stats. The game only limits you by how much materia you can afford/find and how many slots your weapons and armor has to put them in. Characters can’t retain any of this once unequipped, so only limit breaks–powerful attacks only available once a character has received an amount of damage proportional to the power of the attack–and physical appearance in battle differentiate one character from another. And the game chucks characters at you like it wants you to sign up for its online dating service; with nine characters, parties of three or less, plus the old-school restriction of requiring the protagonist to lead your party at all times, I always have two or three who sit on the sidelines for the whole game, just to save money equipping them and to focus on building up the limit breaks for the more interesting characters. Which, yes, I usually choose based on physical appearance, in light of anything else. Which means the dog and the toy cat usually get bumped in favor of Tifa and Yuffie. And quite possibly Barret.

Anyone who’s ever raced a chocobo knows the triumph every time you defeat Teioh…and the pathetic reward that usually follows.

Fortunately, though, Squaresoft packed more into this game than a hackneyed combat system and a questionable set of feelings for an electronically generated configuration of polygons.  In fact, I usual enjoy playing this game to completion.  Likely in attempt to show off the Playstation’s capabilities, FFVII includes a plethora of mini-games including a submarine battle, motorcycle chase, and a snowboard sequence so obnoxiously difficult that it only proves Cloud can run into more walls than Wile E. Coyote.  Furthermore, at the end of the game you open up the option to breed generations upon generations of chocobos–obviously the best hobby to take up with only seven days left to global annihilation.  You can raise chocobos to race, or try to raise special colors to help find all those hard-to-reach areas of the world map.  Again, I enjoy this, but sometime the task takes way too long, and the games variables don’t really feel truly random–while each race offers a 1 in 6 chance of winning the good prize, I seldom actually walk away with anything I couldn’t buy in any one of the hundreds of identical shops in the game, and quite often when trying to breed chocobos that can mate with each other, you’ll end up getting the wrong gender or the wrong color several dozen times in a row.

Final Fantasy VII also offers two bonus bosses, similar to the hidden bosses from FFV and the original Final Fantasy.  The Emerald and Ruby weapons make up for the plateau of difficulty toward the end of the game.  This presents a conundrum though because even though these bosses exist to add challenge to the game, in order to take them down you have to level up far more than necessary for anything else in the game, and it takes the punch out of anything else you’d do.  And while Sephiroth stands as one of the most iconic, impressive villains in any fantasy storyline, it generally disappoints me when I get to that final battle and he fights back with all the strength of an anemic guinea pig.

However, despite the overpowered characters in act three, frustrating random number generator, and a protagonist with forearms like Popeye, the storyline makes this game well worth playing. The save-the-planet eco themes offer, well…actual themes in a game’s storyline.  Sephiroth captivated so much attention by defying the obnoxious tradition that fantasy has of presenting magic-using villains, and the final scene with him carrying two meters of solid steel and dressed like a Chippendale dance only cements the fact that for once, just once, the villain earned his role in the story by acting like a dick to the protagonist, rather than because we all need to learn about how idolatry will lead us straight to Hell (thank you, C.S. Lewis, for welding Christianity into fantasy literature for all time…can we please talk about something else?). And, of course, spoiler alert, while FF characters have died before, nothing tops the moment when we lose Aerith forever. As I explained to my class the other day while doing the video-games-as-literature lecture, “When this happened, I cried like a baby!…no, you don’t understand, this happened like, two weeks ago.”

So to all those people who “debate” whether FFVII or FFVIII leads the series as the best game…WTF? You totally can’t compare the two.