The game’s elemental magic system lets you build snowmen! Out of the dying corpses of your foes, nonetheless.

Anyone between the ages of, say, 23 and 35 might understand the sheer disappointment of nostalgia, how delving deep into the caverns of your past usually only uncovers the noxious fumes that kill the canary of our fondest childhood treasures. Did any of you ever watch “The Real Adventures of Johnny Quest,” Hannah-Barbara’s update of their classic science-adventure series into the computer age? I loved it! I stayed up every night one summer to tape it. I wanted to dive into Quest World, to meet the Evil Stephen Hawking guy who only felt truly alive in virtual reality. I wanted to know what ran through the mind of the psycho religious fanatic. I wanted to travel the world, see exotic animals and mess with cool science gear. And a few years ago when I dug up some of those old episodes, I found I wanted to surreptitiously leave the room when the writers decided to let Hadji bust out a few “Sim Sim Sala-bims.” Yep. Despite possessing the ability to change with the times, “The Real Adventures of Johnny Quest” only succeeded in blandness. And racism. 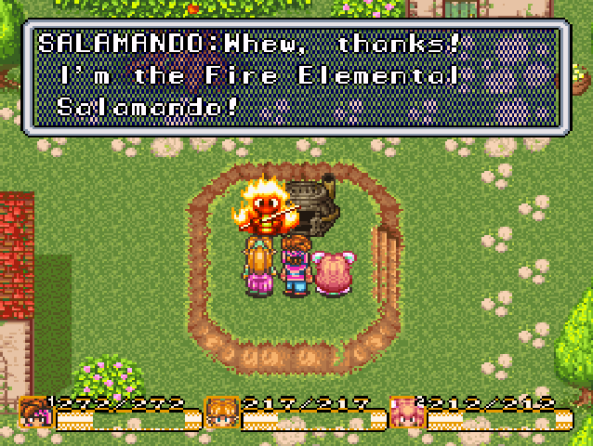 After rescuing him from a plot to create a tropical resort…in the arctic.

And so, with heavy heart I have to confess I had a similar reaction to Secret of Mana, Squaresoft’s epic Final Fantasy Spin-off. Don’t worry, though, I don’t intend to condemn the entire game. Just one guy. Which guy? Guess. Which early 90s Squaresoft employee did everyone know simply by virtue of having the only Western name in the credits? The one whose translations dropped text into the game with the care and precision of a spastic colon? Ted. Fuckin’. Woolsey. Now, it appears that the internet uses people’s opinions of Woolsey as kindling for flame wars, I should give him the necessary credit he deserves: direct translations don’t work. People simply use languages differently, and certain words and phrases don’t translate at all.

Rather, I’d like to say (if I can ever learn to shorten my introductions) that one shouldn’t confuse the Japanese “R” and “L” sound when a) you speak English natively and b) The same name appears both in Final Fantasy (Gestahl) and Secret of Mana (Geshtar). And seriously…he honestly didn’t know Biggs and Wedge, Luke Skywalker’s trusty wingmen during the first Death Star Assault?

So while the old games, even with Woolsey’s translations, don’t fall to the level of Johnny Quest, re-playing Secret of Mana recently made me painfully aware of the jagged, incoherency of the story. The main character, who rarely has any direct interaction with the plot, comes off as a silent protagonist after the first few scenes, but occasionally mumbles just enough so that he comes off as a second-rate mime. Jema, the game’s Obi-Wan Kenobi figure, offers no more advice than “Go to the Water Palace” or “Go to Gaia’s navel,” and the Yoda figure literally tells you nothing more than your next random destination for a good chunk of the end-game. Furthermore, the game introduces a fascinating villain, Thanatos, who shares a name with the God of Death, and we sort of infer is manipulating the war between the Emperor and the Kingdoms (the standard stock war included free with every purchase of a fantasy plot), but we get very little dialogue from or about him and the other villains. These inconsistencies seem to reach a peak when you sneak into the Imperial Capital, leaving the world of medieval-style fantasy villages and plopping yourself down into the horrible, dreary, nightmarish…contemporary urban town with paved streets and cheerful music, where the sun shines down warmly and everyone walks around with a smile on their face.

Let me just flag down a cab here…

…uhh, why again do we want to disembowel the emperor with such a passion? Oh right…something somewhere about a cliched metaphor for limited resources and global warming. I think.  See, I can’t ever tell, because according to wikipedia, they cut a massive amount of text from the game to get it to fit on an SNES cartridge. And rather than economize the language available, artfully revealing key plot points and character development in as few words as possible, Woolsey just let it go. So when the hero’s village becomes overrun with monsters, they banish the only villager with a sword. Now, I support enforced background checks for lances and a ten-bolt limit for crossbows, but I also fail to see the reasoning behind believing that every monster and demon on earth wants to attack you simply because you have a weapon.

But leave you must, and just as the hero becomes unimportant to the story once other characters join him, you pick up weapon after weapon on your journey until you forget all vital details behind the sword, and all towns in your wake remain utterly defenseless.

The characters fighting a monster…Playboy? Well, the nuns at my sunday school did warn about the dangers of pornography.

However much the story lacks, the gameplay makes up for. Rather than the standard consumer economy provided by most RPGs, Secret of Mana tackles weaponry in more of a Marxist fashion, providing you with a set of weapons, free of charge, at or near the beginning of the game, that level up as the proletariat works harder and harder. (Unfortunately, the inventory does not include “hammer” or “sickle”) Combat takes place in pseudo-real-time, with enemies directly on the map, completely free of jarring explosions sucking you into isometric perspectives where the enemy kindly lines up and waits as you pound them. Rather, you move freely about the map, attacking freely as in a Legend of Zelda game; however, with the added encumbrance of an ATB gauge that needs to charge before your characters can summon up enough strength to penetrate the enemies outer layer of…epidermis. The player opens up menus at any time, in battle or otherwise, to use items and cast magic. Magic comes in the form of elemental spirits gathered along the journey, and they can level up with use, same as the weapons. While I usually write my reviews to ridicule the more absurd aspects of the game, I find myself at a loss for good jokes. The combat system wraps things up pretty tightly. It works.

Well, mostly. Despite giving us a rich selection of weapons and magic and a smooth, sleek ring-menu system to navigate between them, Secret of Mana gives you three characters and about half a brain of AI to split between the two inactive ones.  While they’ll refrain from wasting your MP and will generally wait to attack until their ATB gauge fills completely, they do wonderfully smart things such as dart head first into enemies, attack during the invulnerable period after a monster has received a hit, or try to get closer to the lead character by running straight into a wall nonstop like a squirrel confused by a sheet of glass. While you can program basic attack/defense strategies, you can’t send commands to switch these during combat, so it amounts to either one worthwhile character at a time, or the player needs to constantly switch between party leaders.

Fortunately, Square included a crafty solution, allowing up to two other players to join in. If you want to play the game, I suggest hunting down friends, relatives, co-workers, homeless guys, or  prostitutes, since it does make a world of difference, having someone with a brain behind a character who would otherwise serve as much purpose as one of these.

A good way to see the world without getting probed by Airport security.

On the unfortunate side, I don’t really have anything interesting or witty to say about Secret of Mana. Really, what can you add to a game that considers “shoot you out of a cannon” as a viable method of travel, and has a travelling anthropomorphic cat-merchant rip you off by jacking up prices on normal items? The game doesn’t have a lot of visible flaws and its own unique sense of humor, so I have to resort to picking on the poor translator, and since so many people have played it already, I don’t really feel the need to describe it in detail. So ask Santa for a copy this Christmas if you don’t already own one. And if he fails to deliver, buy the game and kick his ass.

Because seriously…you fight Santa Clause about halfway through. Santa tries to kill you. Santa. An enemy. How can you improve on a fantasy death match with St. Nick?

2 thoughts on “Secret of Mana – SNES”