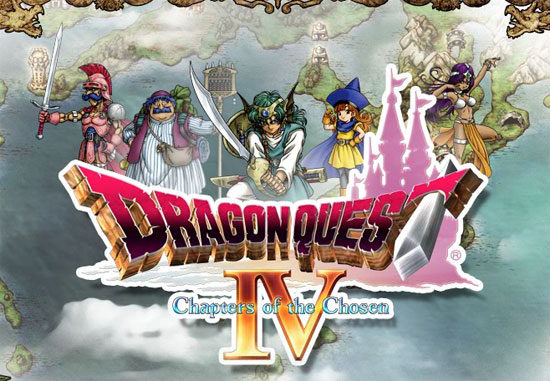 Stunning artwork by Akira Toriyama, which you will never see with the first-person battle system.

Sometimes I wonder if game designers ever play games themselves. When they go home from a hard day at Square-Enix or EA or wherever they work, do they sit down, pop in Goldeneye 64 and vent their aggressions on unsuspecting polygonal clones? Because half the time, the games I play suggest that the designers slapped together a few inebriated, late-night ideas together, hired some monkeys to make the code functional, then add required backtracking, level-grinding, or needlessly long menu dialogue to pad the game out to the optimal length for predicted financial success.

And so we arrive, weary and saddle-sore, at the beloved Dragon Quest series. In particular, Dragon Quest IV: Chapters of the Chosen stands out as the paradigm of wrong answers to good questions. “What part of the traditional JRPG do players consistently enjoy as the most stunning part of the experience? What makes them ignore the phone, neglect their schoolwork, household chores and personal hygiene, and refuse to develop a social life more than any other point in the game?”

“Fuck you!” responds the boss, who follows up by firing the up-and-coming mind.

“Hours and hours of monotonous grinding?” someone suggests.

“Technically, true. Put it in the game. But what do they love? Why do they love RPGs with the intensity of a rabbit overdosing on Viagra?”

“The first hour and a half where you have no money, no access to anything cool, and  no abilities other than attack and item?”

“I like it,” says the boss. “We’ll do it five times, and throw in some of that grinding to make it more like three hours.

And thus, the incipient Dragon Quest took form. Chapters of the Chosen focuses on…the idea of not focusing on anything. The story opens with the generic blank-hero, a character so bland compared to everyone else in the game that the lord of hell himself couldn’t drag my projection of myself into the game. “You want me to imagine myself as that guy?” I ask the game. “No thanks. You go on and play without me. I’ll just watch this one.” Feigning a fast-paced, exciting game, monsters invade the hero’s village, looking for you. After killing your neighbors, your adopted parents, and your love interest, the monsters decide they just don’t feel like putting the effort into eviscerating one more human and leave your cowering in a mixture of fear and bodily fluids.

And then the game, bored of the hero’s personality already, leaves you as well, and goes on to someone much more interesting. I’ve just described the prologue. Bear in mind, you don’t even get to battle the monsters. No fighting. Not with the protagonist. Not yet. C3PO and R2D2 make it to their hero at light-speed compared to this game. So the game shifts to Ragnar McRyan, whose king has sent him to find the hero–but before he does, we have to help Tsarevna Alena pull a Princess Jasmine. Alena eventually Alena joins a tournament that almost introduces the villain– 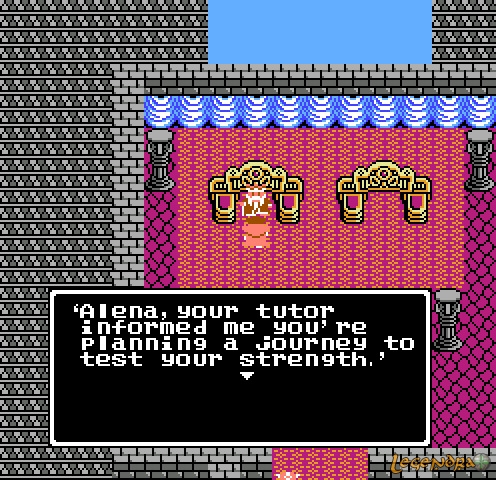 Thought I should include a screen shot of the NES version. Apparently they added the borderline-offensive gibberish for the DS version

–but first cuts to the story of Torneko Taloon, Akira Toriyama’s answer to Nicholas Cage, and his aspirations to profit from mass slaughter more than anyone has ever profited off anyone else’s misfortune ever before. Torkneko deserves special attention, for taking role-playing to the extreme. Flash back to the execs meeting:

Just to mess with you, they included “night,” which translates to “for half the game, you’ll wait for the useful NPCs to wake up.”

“We need a role that will open up their eyes to the possibilities!”

“Why not a Samurai?”

“What about a Cowboy?”

“What do I pay you losers for?”

“How about we put players in the role of a mindless clerk standing at a cash register all day long?”

I should mention at this point that I haven’t exaggerated anything yet. During Torneko’s chapter, you literally spend huge chunks of time standing on the merchant’s side of the counter, waiting for people to come in and buy weapons. Torneko hopes to save up enough money to buy his own gear to set out on a money-making adventure, but he doesn’t even get to keep the cash the store rakes in–his boss pays chicken feed, amounting to less than a 10% commission on each item sold. But still, it gives you the option of refusing sales to each customer, and sometimes they won’t pony up enough cash and will walk out empty handed. 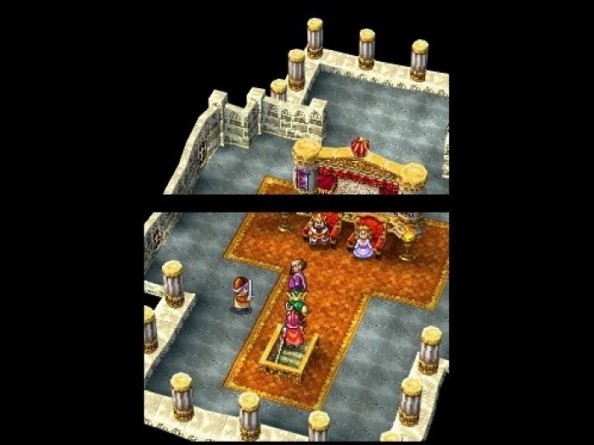 I spent a great deal of time wandering as the game felt I’d enjoy it more if I had no fucking clue about what I needed to do next.

And then just for good measure, we get another chapter. And each new chapter opens up with flat-broke, level-1 characters who fight monsters with all the effectiveness of a paraplegic cub scout wielding a foam pool noodle. Grind away, ladies and gentlemen. Seriously, I haven’t exaggerated anything yet. By the time chapter five dragged itself in to let me play as the hero, my game timer read 12:56. Out of the total 30 hours I played the game, I spent 43% effectively at the beginning, grinding until the “attack” option did reasonable damage. And for the zinger: the story keeps going after the final boss! I beat the game and it offered me another chapter. Thanks, but I’ll pass.

One positive thing I’ll say for the game: it gave Torneko an ability to initiate a monster battle at any time, cutting out the need for useless walking between battles. I take this as clear evidence that Dragon Quest IV knows it only has value as a time-killing grinder, but even with this trick to speed things up, it still felt like I’d hit my mid-life crisis before the end of the game. Unfortunately, any time gained by not walking while grinding balances out with time wasted managing menus. For each option, you have to flip through three or four dialogue boxes that want to confirm in triplicate that yes, you indeed want to use that herb. Or save. Or anything. Yes. Given the choice I will always answer yes. Yes, I’ll sell the damned sword! Yes, I want to equip the armor! Yes, I’ll continue the game after I save! (who thought of this one? Do you need to go to a special screen to shut the power off? Did the original NES erase your data otherwise?)

The game features a casino; If you want to waste more than time, why not waste money, too?

I think I can stick to the same assessment I gave the original; I’ll play the game as long as something else in the room can take my priority attention. Otherwise, I still don’t see the appeal in Dragon Quest, other than Akira Toriyama’s artwork, which I could download in much less than 30 hours. A game that centers on level-grinding and only includes a half-assed plot and characters doesn’t really offer much value, especially compared to most of the Final Fantasy installments. I don’t understand how these games rate so highly.  And yes, I’ve lived in Asia and I’ve seen Gaijin Goomba; I understand that different cultures think differently and have different needs. But I don’t think I need to spend thirty hours hitting the “confirm” button when I could have just as much fun pushing the buttons on my shirts.