Covering The Strange Case of Dr. Jekyll and Mr. Hyde in class this week, my students couldn’t have shocked me more if they had all ambushed me with cattle prods; they actually liked the book. But why not? It actually makes a good story, reads easily, and only lasts about eighty pages. However, the reason they gave was the suspense of not knowing what would happen next and the twist ending. Yes, my students hadn’t even heard of the story before, and jaws dropped faster than a cartoon wolf in an Asian strip club when they figured out that Dr. Jekyll and Mr. Hyde were, in fact, the same person!

Hopefully I didn’t ruin the story for any of you, but I insist that spoilers have a statute of limitations, and I have no obligation to keep secret a plot devised in 1886.  Unfortunately, while I couldn’t believe how many of my students hadn’t heard of Dr. Jekyll and Mr. Hyde, I have no shred of doubt that the developers at Toho and Bandai hadn’t heard of the book either.  While the book comments quite adeptly about the duality of human nature, clandestine desires, and the forced separation of public and private lives, the NES game has the literary value of a bird shitting on pedestrians. I didn’t intend to employ sarcastic wit in that last sentence; the game literally forces the player to dodge steaming piles of bird crap, lest it kindle the rage within Dr. Jekyll, transforming him into the incredible, hulking figure of Mr. Hyde. Covered in feces. 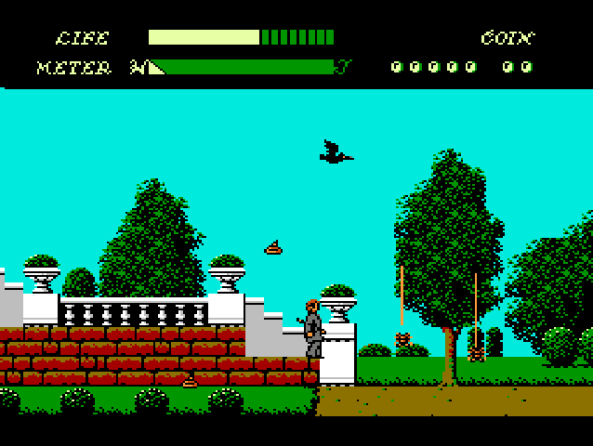 I wonder why it comes out pre-piled…

NES games didn’t sell themselves on strong stories; most games had a premise, at best a scenario to follow, but they didn’t consider gameplay as the venue for developing plot.  However, with a timeless tale of horror already fabricated, making the game interesting should pose no problem at all. Right?  Unfortunately, while the book focuses on Jekyll’s close friend investigating the bad crowd the doctor has fallen in with, while giving us glimpses of Jekyll losing control of his personality, the game has the good doctor on his way to the church to get married.  Apparently harboring a criminal rage that indulged in dark pleasures didn’t excite Toho quite as much as the conflict of not being somewhere else. Along the way, the common rabble of London work their magic to piss Dr. J. off as much as possible.

Robert Louis Stevenson when they pitched the bird shit idea to him.

While I’ve played games with pretty far-fetched elements (including the murder of frogs by force-feeding turnips), I find the scenario downright implausible.  Everything becomes an obstacle. Vicious dogs make sense, as do ruffian orphans.  Yeah, we’ve all watched the skies with guarded eyes for the rogue seagull with dysentery, and I can even stretch to say some people may freeze in their tracks if a spider dropped out of a tree.  However, I can’t quite see why every full-grown adult in the London streets feels the need to body check Dr. Jekyll like they only have one shot at the Stanley Cup, and the dozens of mild-mannered citizens dropping bombs at his feet give me reason to wonder why the police feel the need to make Mr. Hyde a priority arrest. By the final level, the game starts chucking barrels like it always wanted a career in Donkey Konging and its father forced him into a career murdering classical literature, and in addition to the suspension of suspension of disbelief, it becomes virtually unplayable, even with save states. 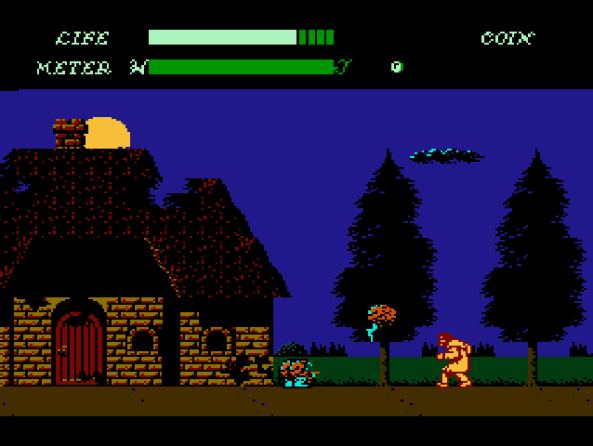 As Mr. Hyde, beating up on brains makes you feel warm and fuzzy.

The game did experiment with a few novel concepts for its time.  The player has not only a life meter, but a mood bar as well.  When the life bar enemies, the player dies–no surprise there. However, when the mood gauge empties, the player transforms into Mr. Hyde, day becomes night, side-scrolling moves right-to-left, dogs and cats living together…mass hysteria.  Apparently Mr. Hyde needs some down time to vent his frustration, and wailing on monsters and demons rampaging through London (which again gives pause over the danger Hyde poses) makes him feel better. Successfully not dying as Hyde returns Dr. Jekyll to his quest of…going to church…and refills some of his life bar.  Also as Hyde, enemies drop coins, which Jekyll can use to pay off singers who spout out music notes like shrapnel, and to much of the same effect.  Dropping the pretense of music causing physical harm, this amounts to a man putting off his own marriage because he feels the need to stop and comment on how much he doesn’t like street performers. And again, Hyde is the jerk?

Normally when a game frustrates me, I remind myself that developers plan gameplay and test their games to make sure players can, theoretically, get through them.  However, Dr. Jekyll and Mr. Hyde ruined challenging games for me by shattering that axiom.  I could barely finish the game using save states.  Some scenes threw so many enemies at me that I had no choice but to replay them and hope for a fortunate random behavior to give me an opening to get through, a task made infinitely more difficult by the fact that Jekyll handles like a Winnebago with four flat tires and no engine trying to pull itself free from a swamp using a broken winch and fifty centimeters of dental floss. The B button controls a walking stick, which the player can wave around to feel more like a Victorian gentleman, but it doesn’t actually effect the game in any way.  I chalk that up to a glitch, considering the number of bombs that followed me as I jumped over them, and how the game inverted its colors during the final level.

This is what happens when you finish. Literally. You see this screen.

Honestly, I wonder how people thought games like this would sell.  I’ve finished some difficult games in my time, but I’ve always felt someone could finish them without save states if they had enough free time on their hands, but I don’t think Dr. J. and Mr. H. falls into that category. The end of the game offers less satisfaction than even the SNES Jurassic Park adaptation, but at the very least I won the right to complain about how terrible this bird crap of an idea turned out.

Working my way through Shadow Hearts: Covenant. Slow going, but I’ll try to update when I can. Thanks for reading!