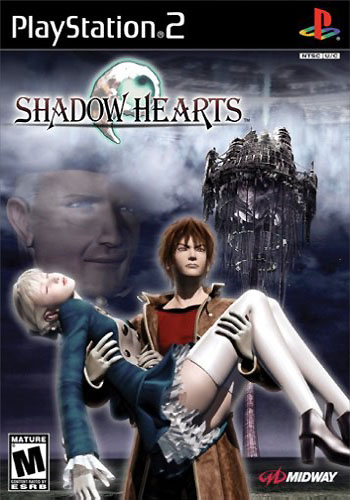 Shadow Hearts holds the distinction of having the most kick-ass box art of all time.

Hehehe.  Let’s talk writing for a bit.  Hehehe.  Villains have made derisive laughter an art form. People love it.  I used to practice my evil laughter as a kid.  Hehehe. It even merited an Austin Powers gag. Hehehe.  Used correctly, it can create an air of menace by painting a game’s enemy as powerful and confident, a daunting task for the hero. Used incorrectly, it gives the impression that he may wander off in the middle of the battle looking for something to eat.

And sadly, Shadow Hearts leans in the direction of the latter, with villains and heroes alike floundering in the aftermath of a dentist-office gas explosion.  While I love the series, I can’t help but admit the flaws in the writing.

The first game in the Koudelka universe branded with the series’ title, Shadow Hearts introduces Yuri, the harmonixing youth with a heart of gold and a soul full of filthy, horrible monsters.  Hearing a voice in his head telling him to rescue Alice, the damsel in distress, from the Japanese Army who hold her prisoner on a train bound for Shanghai.  Finding the Japense soldiers dead, Yuri squares off against an English gentleman who goes by the name of Bacon, a moniker that, when shouted in a spirit of anger and vengeance, equates the game’s antagonist with clogged veins and heart disease.  After receiving a thorough trouncing, Yuri summons the strength to leap into the stratosphere while carrying Alice (because in video games, injuring people only makes them stronger) and the two land in the first of many episodic, horror-themed, RPG adventures.

I’ll spare the details of the rest of the plot because they simply don’t matter.  For a story with so many things going for it, the actual action of the story could have coalesced from the flotsam of sunken B-horror films. They don’t fit together well, but the game wants us to focus on them, even going so far as to devote major cut scenes to ghost-story backgrounds for minor bosses. At one point, Yuri and Alice stumble onto a village terrorized by a ghost who kills a new victim each night.  When the elder tells them about the ghost, she really hams it up.  Real people supposedly have died, and this monster has put Alice under the fatal curse, and this woman squeezes out onomatopoeia that would make five-year-old girls giggle. 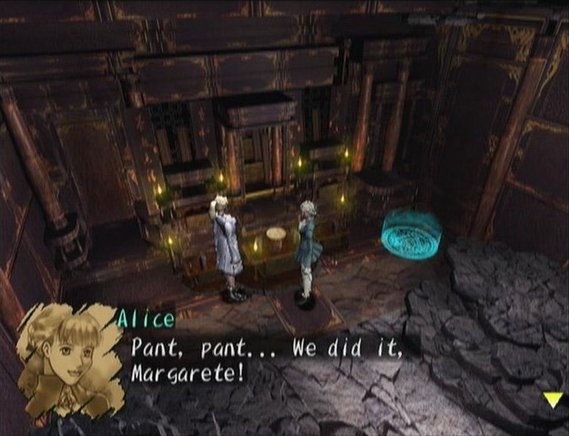 Kinky! The second of four games, the female lead has gone up to about a B-cup. Future games will push those boundaries.

But you don’t play Shadow Hearts for the plot, you play it for the premise.  Oddly enough, the character development and relationship between Yuri and Alice carry the story.  As a harmonixer, Yuri fuses with monsters to gain strength in battle, but the demons possessing him take their toll on his soul. The battle system furthers this aspect of the story; characters have sanity points they must maintain, and every time Yuri transforms, his sanity points drop drastically. Running out of points drives characters into a berserk state where they can’t distinguish friend from foe, and it counts towards a K.O., depriving them of exp at the end of battle.

In what I consider a fascinating treatment of a hero (even an anti-hero), Yuri can’t withstand the effect this has on him.  He succumbs to insanity and destroys Shanghai.  Later, after she brought him back to his senses, Alice tries to save Yuri’s soul by offering her own to the god of death. 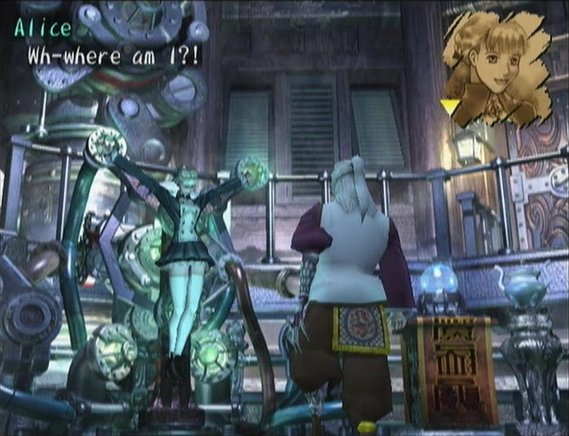 Torture…mini skirts…peg leg…there’s so much going on in this scene I can’t withstand the power.

And in that aspect, one of my major beefs with the series emerges, because Alice’s fate changes depending on which ending you get, and while the player can work through some interesting challenges to get the good ending, the easy ending to achieve actually feels more satisfying.  Yuri struggles for peace in his soul during the whole game, and he owes much of that peace to his relationship with Alice.  The fact that his peace requires her death provides a darkly poetic irony to conclude the story, and also to propel him into a frustrated angst that moves him to action in the sequel.

On a technical aspect, the game doesn’t vary too much from its successors, Covenant and From the New World.  The judgement ring still stands between you and nearly every action you perform, including magic, physical attacks, items, and interacting with the non-combat environment.  While I’ve previously praised this idea (somewhat) for making the game more engaging, I sometimes feel that it doesn’t always make sense; I would think the whims of fate have very little to say in whether or not you can pick up kettle from a table.  That more often falls under the whims of degenerative neuromuscular disorders, which don’t seem to bother Yuri most of the time.

One staple of modern RPGs becomes extra annoying in this game; the three-character party.  Too many games feature multiple characters as a selling point, only to limit you to a three-member team.  Furthermore, they generally require you to stick with whatever twat they’ve decided to make protagonist (I’m looking at you, Legend of Dragoon!), which pretty much limits you to two characters.  Now, while I’d play with Yuri more often than other characters, I still enjoy all the others–in fact, Shadow Hearts has made a name for itself by introducing bizarre characters in every game, so I hate cutting anyone from the team.  Furthermore, I grew very fond of Zhuzhen, the Chinese wizard, but halfway through the game, the new characters eclipsed his power in a way that made him obsolete.  I liked the ol’ coot, and for some reason they paired up Yuri with a new old-guy friend in Covenant, so he sadly drops out of the story.  Margarete, the “alluring female spy” also intrigues me–mostly because if you google her name, pages about Mata Hari pop up.  Sadly, Mata Hari dies during World War I, so I guess they had a reason for keeping her out of the sequel. 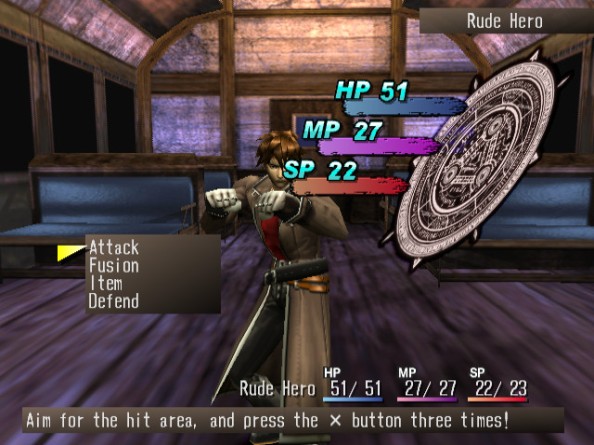 First of many appearances by the judgement ring

The game has math issues as well. The bonus for hitting the judgement ring in the strike zone adds only a small boost to attacks, noticeable only at mid-game levels and not effective until end-game levels.  Every enemy has one of six different elemental affiliations, but using opposing-element attacks has all the effect as mounting a spatula to the end of a bayonet. Support spells grant similar half-hearted measures, akin to increasing your defensive capabilities with a fine, state-of-the-art sheet of newsprint, or increasing your speed by thinking about a Roadrunner cartoon you saw as a kid. Halfway through the game I realized I could take off all stat-increasing equipment and replace them with accessories that grant status immunity and still suffer no noticeable loss in power or defense.

The unwelcome house-guests of the soul take inspiration (mostly) from the suits of a tarot card deck.

Fortunately, the game knows it failed miserably, as evident by the fact that the sequels fix all of the complaints I just raised here.  Elements and status attacks have a noticeable impact in Covenant and FTNW, equipment offers helpful bonuses, and parties consist of four members.  Furthermore, the game recognizes that just because characters don’t enter battle, they also don’t vanish entirely, and the subsequent games let you switch out the main characters when you don’t feel like using them.  I always thought the convention of peek-a-boo style party forming didn’t make sense.  At one point during Shadow Hearts, in his quest for the ultimate weapon, one of my characters had to fight his brother one-on-one.  Unfortunately, little bro KO-ed my fighter, and even though five other playable characters witnessed this event and still had full control of their senses and perfect health, I found myself staring down the business end of a Game Over screen.

Sorry for the infrequent posting, but school demands more attention. I’ve been on a Shadow Hearts kick lately, so expect a review of Covenant next. Afterwards, Anne wants me to play The Last Story for Wii, and I’d like to go to a Sega or SNES RPG, so that should be interesting. Don’t touch that dial.