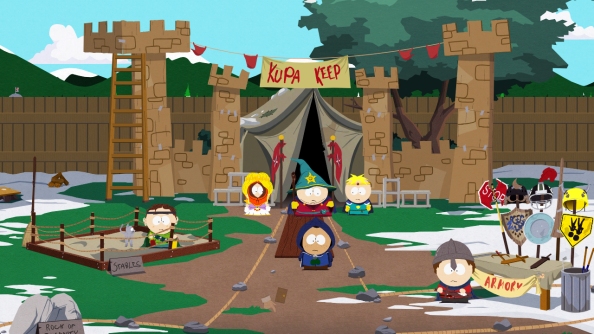 The world of RPGs is in dire peril. The once-noble Square-Enix has abandoned its loyal subjects and now appeals to the lowest common denominator. Sacrificing gameplay, story and style, they have heaped enough muscles onto their protagonists that each one qualifies as its own Olympic wrestling team and armed them with enough firepower to give the NRA spontaneous orgasms. Meanwhile, Nippon-Ichi floods the market with games written as though someone had copy-pasted a bunch of fan fiction pdf files and didn’t notice that the formatting fucked up. These games consist of one bombardment of verbal diarrhea after another that connect repetitive and clunky battle systems that work as well as an NES with broken connector pins…after someone threw it into the Grand Canyon. Bethesda offers us reprieves with an occasional Fallout or Elder Scrolls title, but these come only slightly more frequently than a nun and have so many bugs that the games require heavy fumigation. But in our hour of need, two warriors emerge from the darkness, standing tall over everything we’ve lost. Armed with nothing but their wits, a love for RPGs, and a virtually unlimited amount of financial support based on the success of a major TV series running for nearly two decades, Trey Parker and Matt Stone stepped forward to give us their role-playing masterpiece, South Park: The Stick of Truth. 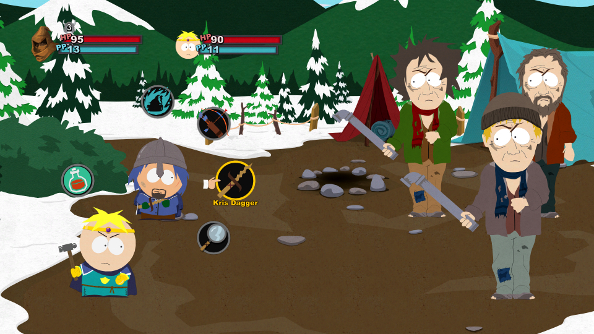 Beat up the homeless so they leave town. If South Park doesn’t have homeless people, they’ll look more compassionate.

The game gives you control of The New Kid, also known as Douchebag, who arrives in South Park just in time to be swept up in a long-term game between Stan, Kyle, Kenny and Cartman, that more resembles a minor gang war than a 4th grade playtime. Cartman leads the humans as the Grand Wizard of the Kingdom of Kupa Keep (KKK), who possess the Stick of Truth, the most macguffiny macguffin ever conceived for fiction. Whoever controls the Stick, they say, controls the universe. You’d think that control of the universe would include the power to keep the KKK’s rival faction, the Drow Elves, from stealing the Stick. But of course that’s the first thing that happens, giving Douchebag the impetus to begin his quest.

The Grand Wizard of the KKK, using fire to smite his foes.

It’s sad for me to say this, but a game that lets you fart into your hand and throw it at enemies is better than anything that Square-Enix has put out in at least ten years. But it happens. Frequently, actually. Because parodies have to be so tuned into the tropes, characteristics, and weaknesses of their genre, they often become paragons of what they’re mocking. When I first saw the Venture Bros., I felt like re-watching Johnny Quest, only to find out the series developed plot less than an episode of Scooby Doo and oozed enough racial superiority to bleach the Klan’s linens. I’ve read that Parker and Stone are huge fans of classic RPGs, which goes a long way to explaining why so many elements that frustrate players don’t appear in Stick of Truth. Random battles happen only enough to stay interesting, and the type of enemies vary enough that you don’t get into the standard RPG pattern of taping down the X button and going outside to mow the lawn. Many games use backtracking like a bra—the padding makes it look bigger and better, but once you strip if off you’re left with a deep-seated disappointment. Stick of Truth, on the other hand, has a fast travel service, but I found myself opting to walk across the map because it had enough interesting things going on in the background. But this begs the question, if the South Park creators know what players want because they are fans of RPGs, what exactly do full-time game developers do for fun?

The game focuses heavily on story and plays like an extended episode of South Park. Playing to their strengths as writers, Parker and Stone have found new and interesting ways to incorporate their brand of humor that should have gone stale in 1998. They do avoid their usual satirical style, most likely so that the game has a shelf life longer than grocery store sushi, but do rely heavily on social media trends like Facebook and Twitter. They also center a quest around Al Gore’s search for Manbearpig, their rather embarrassing comment on climate change denial, but I can forgive this. Like drunken antics at a college party, we can look back and admit something might not have been a good idea, but was still funny as hell. 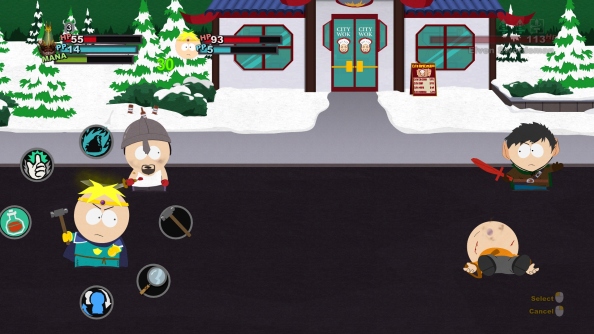 If there’s one complaint I have about the game—and I can’t believe I’m saying this—it’s the overly complicated fart mechanics. Trying to pass its gas off as a magic system, farting works more akin to Skyrim’s dragon shouts. Each of the four flatulent skills you learn requires a specific combination of inputs with the right and left control sticks. Holding the right stick in the down or up position allows you to change direction, tune a frequency, or steer with the left control stick, and you can let rip your attack, unleashing chemical warfare in the form of deadly gases, by changing direction with the right stick at the right moment. Farting in the Stick of Truth demands precision, the type you need to throw a hadouken fireball while tuning radio dials, adjusting rabbit ear antennas, and filing your taxes all at the same time. Fortunately, the game only requires you to fart in one or two battles, and it’s a lot easier to do it on the map, so I didn’t have to worry.

Yup. This is happening. And it’s a GOOD game, remember.

There are other problems, to be sure. The game feels too short, and a little sparse on available quests. You have companion characters to use in battle, the four main stars, Butters and Jimmy, but halfway through the game, they kind of peter out and don’t help much in battle other than to use items. But that problem corrects itself by making the game progressively easier as you learn how to use the battle system, eliminating most of the challenge even on the highest difficulty setting. But still, I can’t praise this game highly enough. It shows us what PS3 era RPGs could have been, if only game developers weren’t sitting around like corporate monkeys, throwing their feces at traditional players in hopes of selling something to any moron with an xBox and a copy of FIFA 2013. The industry’s behavior almost sounds like an episode of South Park…