Taste the half-assed advertising campaign. I mean rainbow. Also, give us money.

Everywhere I go, I hear people lament the loss of good advertising. “Oh why can’t we get a few billboards put up in school hallways?” or “For God’s sake, I don’t have nearly enough time to take dump in the middle of my TV show. Couldn’t we make the breaks longer?” or “These webpages load way too fast! I might have a seizure. If only we could fill it with dead weight to slow it down.”  Fortunately, Corporate America has devised a clever new way of treating us like morons in hopes of us giving them money: product placement in video games! And thus, with a heavy heart, I introduce Darkened Skye, a high fantasy epic action adventure platformer about a young sorceress heroine who unlocks her hidden magical potential…with Skittles. Yes. Those Skittles.

Skye, a young twentle herder with a sort of Christina Hendricks vibe opens the story with an onslaught of unsolicited exposition about not knowing her father, wanting to find her mother, hoping to live to a higher destiny than herding twentle, and other such topics that don’t really segue into one another, but would still help us understand everything about the story without having to subtly reveal this all piece by piece throughout the course of the game. Then, chasing after a twentle that suddenly blitzes a technicolor path away from the herd, she finds an orange skittle, magical things start to happen, and suddenly the game’s great evil puts her on his hit list.  The game reveals very early on that it doesn’t take itself very seriously and adopts an irreverent tone. They even give you a wisecracking gargoyle sidekick. Or, rather, a cracking gargoyle sidekick. His jokes don’t display a whole lot of wisdom or wit. 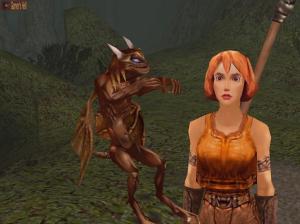 Trust me. You’ll enjoy this picture more than his joke.

See, if you want to make a game that mocks the tropes and cliches of mill fantasy stories, first you have to have the talent to actually write a better story. Darkened Skye wants to toy with these tropes, but sometimes makes fun of minor ones while oblivious to the extremely worn out plot devices. Early on, Skye discovers a secret message–which the player never sees themselves–and declares sarcastically, “How will I ever decode this? They wrote it in backwards writing!” Congratulations. You figured out the Mirror of Erised as fast as a borderline-aspergers case who used to read things backwards everywhere I went.  Now would you please throw in some snappy witticism about revealing that the villain’s right-hand man who’s plagued you throughout the game dramatically reveals himself as your father? Please? Even a short remark indicating that you know how often this happens in science fiction and fantasy?  No? We just want to look the other way on this one? Nah, that doesn’t embarrass you in the least, does it?

I have to go where? Do these pillows at least have a railing?

Before I continue…Fuck you Mario! Damn you to Hel! You heard me…the Norse Hel. Where a dragon will gnaw on your corpse for eternity.  You save one measly video game industry from collapsing, and now everyone assumes that nothing pleases players as much as hopping from tiny ledges over gaping chasms.  Seriously, though; Super Mario Bros. didn’t even focus on that. Why does everyone who wants to throw together a game without any inspiration whatsoever automatically drain their environments of anything interesting, fill it with water or lava or just take away the ground, and assume that will sell? The early stages of Darkened Skye reveal the heroine’s complete inability to swim just before taking her to an archipelago for the first 30% of the game. And of course, if you so much as get your toe wet, you have to restart the level. Does no one understand that people naturally float? No one should die that easily in water unless their body consists of pure potassium.

Shit! I missed. Would you mind waiting for my candy to recharge?

But when not hopping over obnoxious gameplay cliches, Skye has to fight monsters. She begins the game with a staff that she can bash over the skulls of her foes with all the might of a pile of overcooked spaghetti, but eventually starts accumulating offensive magic, which fire different types of missiles at her foes with all the might of a pile of overcooked spaghetti. I can’t tell whether the designers wanted tedious combat or frustrating combat. Either way, you’ll run through a lot of life potions while fighting, and often–especially early on–you’ll lose less life just by turning the other cheek and performing your work as though you didn’t have evil lizard-frogs shooting two or three fireballs at you every second.  Later in the game, this evens out a little, although I can’t tell if that happened because I got better, my spells got stronger, or that I didn’t have to worry about falling off as many precarious precipices. Still, the lack of an aiming mechanic makes fighting enemies at a distance a pain, and even using the staff melee attack, Skye just swings it around ostentatiously with no real regard for the thing directly in front of her that the player wants to kill. Combat takes time, saps life, and I couldn’t have gotten through the game if it hadn’t essentially let me use save states.

Found this long before I got the shrink spell. Had to go through long after I got it. I didn’t figure this out immediately.

Except for aforementioned offensive spells, Skye’s magic performs effects. True Sight lets her see invisible things, Firewalk lets her cross lava on foot, and Diminish lets her briefly shrink to a tiny size–an interesting feat when you realize the people playing the game use Skittles to magically increase their size. I’d describe it as a refreshing concept had they actually done it well. They don’t always make it obvious when a new spell becomes available, and oftentimes when you do get one, you don’t yet have enough of the right color of Skittles to perform it. So I ran into a lot of puzzles that confused me to no end, only to find the solution in my magic menu a half hour later.  Or even better, sometimes I’d run into puzzles after forgetting about a spell I used once or twice at the beginning of the game, a problem compounded by the fact that the only person who published a complete walkthrough online seems to consider punctuation pretentious.  The entire guide contains about three sentences and cuts out some important information; at one point it told me to follow a set of human footprints instead of gargoyle footprints, but didn’t bother to mention that without the spell that I literally only used in the first level I couldn’t see either of them.

I wanted to hate this game. I really did. Honest. But despite obnoxious boss battles, lame attempts at humor, endless combat, reloading the game every twelve seconds, at a series of bugs and glitches, one of which makes Skye move through the level like her puppeteer had tangled up her strings, I actually caught myself enjoying it.  Sure they pour inept jokes into the game like a leaky septic tank, but every so often they pull off something genuinely amusing–likely by accident, but still funny.  The stages have no relation to each other, but after about six or so, they start to make the world feel flushed out and complete.  Also I didn’t mind the busty orange-haired heroine with the voice of Princess Jasmine (almost the only acting job she’s taken other than the Aladdin franchise). I actually liked it in a never-going-to-play-this-again sort of way. 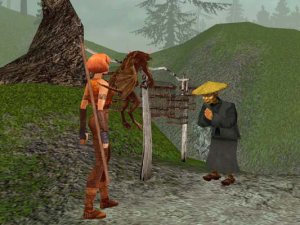 If I could take screenshots with my Game Cube, I’d show you the marionette glitch. But I can’t. So here’s a Chinese-looking guy instead.

The length, however, holds the game back more than anything else. While I beat the game with the clock under eight hours, it probably took me four or five times that much what with all the falling into holes and getting killed by monsters and solving convoluted puzzles and looking stuff up in the walkthrough. Thirty hours feels like ages for a simple game like this, and I can honestly say I’ve never given that much attention to a commercial before. I actually don’t mind advertising.  I don’t really want to think about the day when they start casting big-name celebrities just to endorse products–David Duchovney breaking up the conspiracy in XIII with his trusty Ruger Firearms, or Liam Neeson in Fallout suggesting you raid the old Dunham’s store for top-quality protective gear–but I can recognize that I get some good stuff out of it. Namely, I don’t have to fund Futurama’s animation staff out of my own pocket. But even Burger King and Taco Bell can recognize what Darkened Skye can’t; if you want us to sit through a 30-hour commercial, you have to make the game free.