Let’s add “fire-bot and ice-bot” in same lineup to the list of things Sigma probably should stop doing.

Why, praytell, would a robot need shapely breasts? Unless that’s a special place to store her double-D cell batteries, I’d say the real drama behind the X series is the use of sexbots, hereafter known as “sexploids.”

I haven’t reviewed many Mega Man games, even though I talk about them I’m bringing up an old flame to make the games I do play frequently jealous. Truth is, they’re wonderful, but a little difficult to write about. For the purposes of a humor blog, the games are comic gold. Dr. Wiley, one of the most brilliant minds of all time, has a distinct recipe for his schemes—build a team of eight robots, each with a rock-paper-scissors Achilles heel that will rip each other open like a pinata in a batting cage—and he refuses to deviate from that plan for fear of breaking his streak of inevitable failure. A hundred years later, the ultimate reploid Sigma shows a sense of learning from history rivaled only by the United States Congress, and launches his wars against X using the exact same tactics. Still, writing these blog entries entirely with the copy-paste keyboard shortcut feels a bit like cheating, hence the reason I’ve avoided most Mega Man games.

No, no. It’s totally reasonable that you want to build a ten-meter tall robot with giant hulk hands out of solid gold. Aren’t the practical applications obvious? Oh, wait! Let’s make him fly!

Mega Man X4 tackles the familiar formula with the free thought, creativity, and the deviance of an 80-year-old woman attending mass on a Tuesday morning. The game opens with a cut scene introducing Repliforce, an organized militia of Reploids designed to hunt Mavericks. Perhaps if you live in a world where reploids tend to turn maverick and become threats to humanity, it might not be wise to let them unionize. In the first stage, Sigma hijacks some Repliforce soldiers, pulls a false flag attack on the Sky Lagoon. Again, I have to question the wisdom of the people who welded a handful of battleships together and suspended them over an inhabited city like an anvil over Wile E. Coyote’s head, but perhaps in the future, Congress has passed some sort of MacGuffin Act to move plots along expediently. The Repliforce Colonel shows up in the wake of the attack and decides that rather than disarm and sort out the confusion with reason, diplomacy and grace, he’ll spit out some NRA “cold dead hands” vitriol, thus dooming the entire Repliforce to be branded as Mavericks. Even so, the General decides to peacefully take his army off-planet to found his own colony where they may live in peace, stressing that such an act is neither about rebellion nor insurrection against the humans. So naturally, the maverick hunters do the only logical thing and hunt them down to wreak bloody, bloody justice on their rusting corpses. 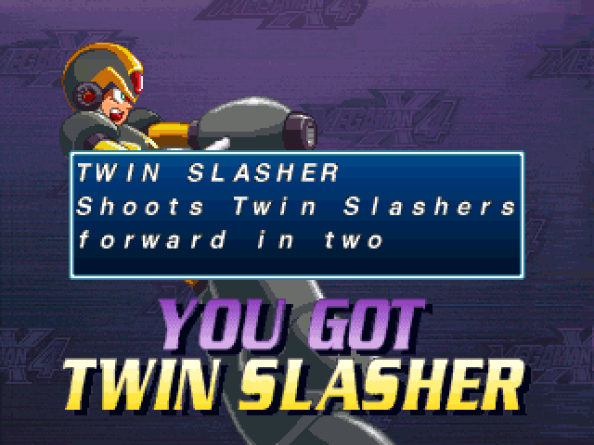 X gets this weapon after beating Grady in the Overlook Hotel.

That is, for those of you keeping score, more story than in the entirety of the classic Mega Man series, and also a wonderful justification for never having attempted anything more in-depth than “mad scientist steals robots, programs for evil, hides in castle.” Fortunately, it doesn’t have to have a strong story; it has to be a good game. And Capcom sticks to its Mega Busters on this one, with the tried-and-true formula of an octet of rampaging robots running weaponry hardware that is 100% compatible with X’s systems. You’d think they’d learn and switch from Mac to Linux. It might run a little more successfully, cost less, and at the very least force X to program his own drivers. I suppose they could switch to Windows, but X would have to read the EULA before each boss fight, and they’d only get one or two good shots on him before crashing and needing a hard reboot. 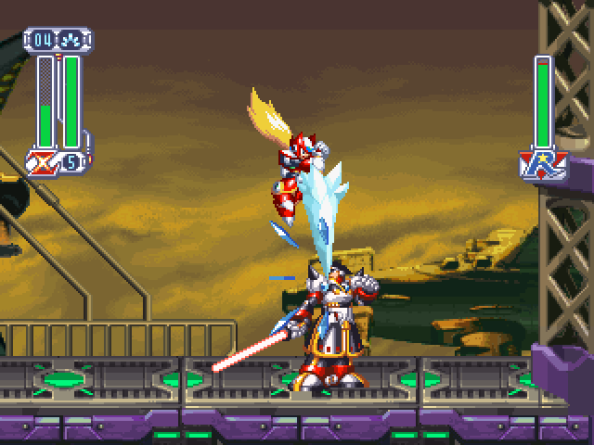 Zero got this technique after defeating my garage roof in February.

X4 adds its own unique touch on the formula, though. Rather than having Zero make cameo appearances as a playable character, the player can choose to play through the whole game as either X or Zero. X does his normal routine, blasting his way through an army of small robots who, I don’t think we’ve ever established, may or may not be sentient, and also searching for the upgrade capsules that Dr. Light spread around the planet like his own Gap chain. Zero, however, functions differently. Rather than gaining mobility through capsules and weapons from enemies, each maverick defeated augments either abilities slightly through the use of special moves. It’s amazing how such a minor change can make it feel like X4 is essentially two games, with the same bosses requiring different weaknesses to beat, some becoming easier and others harder, and level order requiring new strategies and opening new possibilities. In this, X4 introduces a brilliant new feature to the series that cracks the series formula wide open, adding layers of depth to the old formula heading into the future! So naturally, Capcom never did this again.

Dying reploids look an awful lot like a spyrograph design.