Not only that, but there’s a guy behind you too.

A film noir inspired action shooter, Dead Connection has the distinction of being the first arcade game written by running the scripts to The Godfather and The Untouchables through Google Translate (No one remembers babelfish anymore…I can’t make good babelfish jokes). Despite trying to encapsulate the “noir” genre, the game opens with a spastic acid trip that would incite seizures in a hardcore Pink Floyd fan. After picking up on the story basics, which as far as I can tell are “sadness and revenge” and “making a stand against a gigantic crime,” you have all the knowledge you need to move the plot forward. The game is actually pretty good, though. Each level consists of a single, carefully designed environment, fully interactive, detailed, and ready for you to grind it into rubble by blasting wave after wave of gangster who comes your way. It’s like Kill Bill with shotgun upgrades; one (through four) valiant, revenge-driven heroes plowing through dozens, even hundreds of goons with nothing to protect you but your wit, the weapons you collect on the way, and immortality purchased with a stack of quarters that even the Dragonballs couldn’t provide. 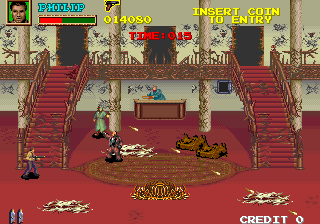 In the future, you can just ring the bell on the desk.

Danny Sullivan is a prick. This racing game is an early instance of microtransactions, where the player can stuff the coin slot like he’s only got five minutes left with a prostitute in order to beef up the stats for his engine. Not that any of that matters when you drive like I did—which is to say I sputtered down the track as though my pit crew had watered down my gas, struggling with the controls until I ended up driving backwards. Fortunately the collision physics work fine, and if I was going to look like a stoned chimp was driving my car, I was going to take everyone else down with me. My biggest accomplishment was turning the game into Danny Sullivan’s Late For Work On A Backed Up Freeway Simulator. I came in fifth. But I was only two places behind Jesus. The arcade cabinet likely used steering wheels as controls, which didn’t emulate very well on MAME, especially in the game menu. Fortunately, there are very few major life decisions made via steering wheel, and it’s usually limited to scenic vs direct routes, whether or not you’ll turn onto the abandoned wilderness road where inbred murderers have likely laid a trap for you, ACT exam scores, and whether or not you’ll be confirmed into the Christian faith or move to Mexico to buy your own brothel.

This is Danny Sullivan. In heat. 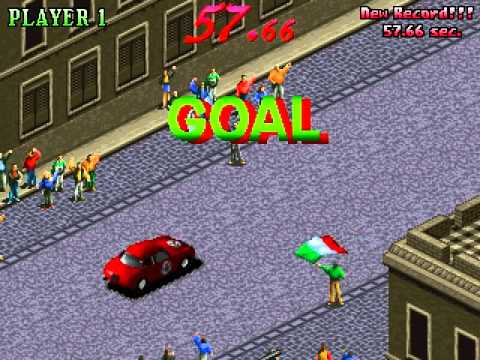 This is pretty much the whole game.

Another racing game. Hooray. Let me crack open a nice, yeasty, disgusting beer to celebrate getting two in a row. That’s like tripping on the stairs and falling through the floor when you hit it. At least Great 1000 Miles Rally Evolution Model, a game assembled from a bunch of spare nouns the developers found in a dumpster, got my number from Danny Sullivan. Any time you peel out, spin around, or even burst into flames like someone lit up a pack of sparklers at a rehab clinic, the game gives you a gentle, motherly nudge that sets you back in the right direction. Each of the three tracks you can choose warns you well in advance when you’ll need to turn by flashing a bright yellow, contorted arrow telling you exactly how the road bends. You don’t seem to have any opponents, and the game usually lasts around 70 seconds—which means the enterprising game could potentially make $12.80 an hour. Anyone who makes that much will almost certainly find themselves on Fox News as an example of an overpaid bum, and this was 25 years ago! That’s a pretty enterprising machine.

This is what you get when you mix acid and weed.

Back in the Late 80s, I remember seeing advertisements for this movie about a little kid who flies around on a bed. Personally, as far as the flying-bed-adventure genre goes, I had always felt that Bedknobs and Broomsticks sufficed, and I never built up the curiosity necessary to actually watch the damn movie. But if the arcade game is any indication, the film is about whacking dirigibles out of the air while being pursued by a nightmarish Mickey Rooney as a sidekick. The game is an action platformer, which isn’t surprising. It’s been the default design for games since Mario. “Action platforming” is to video games what “bulldog” is to school mascot: it’s what you’re stuck with if you can’t think of anything interesting by the deadline. If you can manage to fight your way past the anti-zeppelin-violence picket lines to get to the machine, it’s actually pretty good at vicariously fulfilling all your fantasies of fighting an epic battle while wearing a pajama onesie, armed with a bedpost.