A yellow gorilla collects pellets to paint the town blue against the wishes of green tribal stereotypes. It’s so obvious, I’m ashamed it took so long for them to make the game!

Amigo is the Spanish word for friend, which, in addition to opening up Mexican Moria, might make you think this game has a Hispanic flair to it. And it does, assuming that instead of running with the bulls, you run with…I don’t know…zookeepers? Pigs? Angry stereotypes of African villagers? It’s a Pac Man clone. During the 80s there was no shortage of enterprising video game characters out collecting dots, presumably to sell either to an episode of Pee-Wee’s Playhouse or to angry Reagan supporters who will use them to stone the gays for creating aids (assuming they can’t find any welfare queens first). This character is a chicken. Or a gorilla. Or a paintbrush. Fuck it…this review would be easier to write if I were on an acid trip. Despite the fact that it’s essentially Pac Man, it’s not incredibly intuitive. It’s like saying, “I developed a new smartphone! It works like Android, except it only runs on hydroelectric power and you turn it on by sacrificing your neighbor’s pomeranian to the elder god Cthulu.” Still, it’s pretty novel to have an attack that makes all your enemies jump over you like you upended the trampoline they were all standing on.

Gives a whole new meaning to the term “Spaceballs”

Also abundant during the 80s were space invasions. Disheartened from constant failures in 1950s sci-fi movies, 80s video game aliens didn’t even bother getting out of their spaceships. Opting instead for a McDonald’s drive-through invasion of earth, they pulled their saucers up to the atmosphere and interacted with earth heroes through their spaceship intercoms. In Azurian Attack, they ramp down the invasion even more. Or maybe Earth put a sign on the moon saying, “Only three invaders allowed into planet at a time,” and the aliens were dumb enough to queue up by Mars. Unlike Galaga or Space Invaders, your ship in Azurian Attack can fly anywhere on the screen and make turns. Of course it handles like shooting golf balls off a snowmobile driven by a monkey over a frozen lake. Maybe the game ups the stakes later on with four or even five enemies at a time, but after the first time I died, the crash sound effect refused to stop playing, so I refused to keep playing. Also the spaceship looks like a dick and balls.

Lining up for the face off was the one thing I knew how to do in real life.

Way back ‘round 1990, I bought my first Nintendo off of one of my father’s students. Long before the first Madden game came out, sports nuts had to get their fix of buyers remorse some other way, and this kid bought all the big-name NES sports titles, including Blades of Steel. Despite my disappointment that it wasn’t a swashbuckling adventure about the end of the bronze age, it came with the NES, and having no money, I played it. The arcade version, naturally, is a little fancier. One quarter gets you a minute of playtime, (A standard hockey game lasts 60 minutes of play, and fifteen dollars falls in that weird range where it’s too much to pay for hockey admission and too little to pay for a prostitute.) but the game adds and removes time based on how many goals you score and how many you let in. (A policy that could add some excitement to an evening with a prostitute). 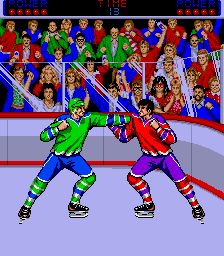 Why do hockey players insist on punching each other all the time? Don’t they know they’ve got razors attached to their feet? It’s in the title of the game for god’s sake!

Having more teammates than buttons makes controlling your players feel like a few dozen laps around a pool filled with Jello. Within the first five seconds of the game, I won the face off, lost a fight, let in a goal, and lost 10 seconds. There doesn’t seem to be an option to aim, so passing the puck is like handing a switchblade to a toddler—the result might be unpredictable, but there’s a good chance you’re going to wind up covered in blood and regretting your decision. I ended up playing for about fifteen minutes, though, and actually won the game 11-9. Much like real hockey, I spent most of my time offsides, the refs didn’t care about the spontaneous boxing matches, it felt like it took forever, and I’m pretty sure that playing the game the way that I did probably would have disappointed my father. Unlike real hockey, I actually got better at it, and I didn’t have to spend all my time with a team full of assholes.

Sadly, Freddie got caught in his safety harness and ended up dangling like an old west outlaw.

Contrary to what the title may imply, Fast Freddie is not the pickup artist who shows Leisure Suit Larry how the job is done right. Freddie is, rather, a cousin of the Hawaiian punch guy with a hang glider and a penchant for mugging the camera. Your job is to leap off a cliff and not fall to your untimely death as a mangled sack of broken bones floating in what used to be your organs. You will, of course, have to contend with a pro-meat-sack agenda, as you dodge some sort of murderous air show of pilots who desperately want to run you through their propellers like a witless sea gull. Freddie wins, I assume, if you make it to the end of each course without being hosed off a fuselage. The game encourages you to be a dick and buzz low over trees and houses, picking up the letters to spell “bonus.” I never did this. Nor did I finish the first course. There’s a helicopter who, I’m sure, has violated quite a few FAA regulations in his quest to replace the casket at your funeral with a series of Tupperware containers. 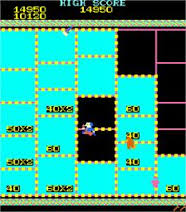 Easily discernible from Amigo because instead of painting squares blue, you paint them teal.

Here’s an example of a wasted name. Knock Out! would make a perfect name for a Punch Out! Clone. But instead of boxing, I got an Amigo clone. That’s right…a clone of a clone. And much like Jurassic Park filled in the holes in their clones with frog DNA (which would probably look less like a dinosaur and more like a pokemon with down syndrome), Knock Out! mixes their Amigo-ness with Donkey Kong. All this cloning makes it look like a tired effort. Even the characters are tired. Mario won’t jump, and Donkey Kong has grabbed the hammer since throwing barrels would take too much effort.

Afterwards they go to the gym to lift their huge triangular iron weights.

My Mame Roulette skills finally granted me a reprieve from clones by hitting on a knock off. I’m guessing “Wrestle Mania” is copyrighted because that’s about the only thing keeping this game from getting hit with a steel folding lawsuit—being put in a “lawsuitplex,” if you will. (What? You won’t? Screw you.) You play as Dynamite Tommy, fighting against some luchador who simply goes by “Insane Warrior.” The game contains all your standard pro-wrestling moves: the suplex, the clothesline, the rope-bouncy run, the vaguely sexual vertical 69, and my personal favorite, the stop-and-wonder-if-any-of-this-is-real. The game might have gone better for me if I didn’t just mash buttons like I had an itch at the tip of my thumb, but as it is, my opponent and I set some sort of record for number of double-knock-outs.