If you’re the type of person who likes to be more aware of your surroundings than your average rutabaga, you may have noticed I’m reviewing the Family Guy video game this week. “Great!” you’re thinking. “Now he’s going to lecture us on the evils of licensed games before telling us how much he likes this one, like some sort of congressman who rails on the importance of family values before being found with a dead Vietnamese transvestite hooker in the trunk of his car. The only thing more formulaic than his entries on licensed games are episodes of Family Guy!”

Family Guy and I have a very special history together. It’s like a supportive grandparent who helped me get through the tough times in life—reliable, always there to make me laugh and make me think, and kind of painful to watch now that its getting older and starting to have trouble putting a coherent thought together. It seems only natural, then, that they’d want to put together something to remember the good times, to recall all those fond interactions. And that’s just what they made. The game, while fun to play, has less the wit and unexpected humor of Seth MacFarlane and more the air of me and my friends mindlessly quoting episodes in lieu of conversation.

Brian disguised as a lamp. His sections were clever and entertaining, mostly because I didn’t play long enough to remember why I hate stealth games.

We’ve seen that the Family Guy writers, at their peak, couldn’t produce a plot longer than about 17 minutes (a number that’s declined as a function of time) unless George Lucas wrote it for them. As such, Family Guy Video Game! Follows not one, but three storylines. Stewie squares off against Bertram, Peter’s sperm from Emission Impossible, now born to the lesbian gym teacher and reigning supreme over the neighborhood babies (which, I hear, is a common origin story for the world-domination types. Look up baby photos of Genghis Kahn. And Trump? His hair is simply hiding the fact that his head is shaped like a deflated football.). Brian, once more accused of impregnating Seabreeze (from the episode Screwed the Pooch), goes on a stealth mission to discover the real father in a Metal Gear Solid meets Jerry Springer sort of way. And Peter, in the only plotline that doesn’t hearken back to a wad of ejaculated semen from 2001, randomly decides that tv’s Mr. Belvedere has kidnapped his family, and the only way to rescue them is to kick the teeth out of every man woman and child (mostly child) in Quahog, and to knock the dentures out of anyone over the age of 65.

Gameplay is simple, stemming from the TV show’s method of humor. Rather than reinvent video games, jokes are thrown in as nods to games from the 80s and 90s, such as the Simpsons arcade game or Galaga. Peter and Brian both control naturally and intuitively, and for the most part Stewie does, too, although aiming at enemies is a bit like being strapped to a tilt-a-whirl. Stewie’s levels are partly platforming, though, which has felt like blindfolded beer pong ever since the shift into three dimensions, but one particular section of extended vertical platforming escalates that to feel more like lobbing live chickens into oncoming go-karts…after a rousing match of beer pong.

Most cut-away gags are played out as minigames and have about as much bearing on the plot as they do in the TV show. The manatees must have been having an off day.

But playing Family Guy Video Game! For a well-crafted interactive experience is like watching porn for dynamic and intricate characters. What really matters is the humor, and whether or not it matches the quality of the show. In a way, it does…and that way is that they clearly only got Seth MacFarlane and one or two other actors to reprise their roles, so most of the quips and one-liners are lifted verbatim from the TV show. So on one hand, it’s exactly the same as the TV show, and yet it somehow translates about as well as if someone ran it through two dozen different languages on Google Translate. Wait, actually, that could be pretty funny… 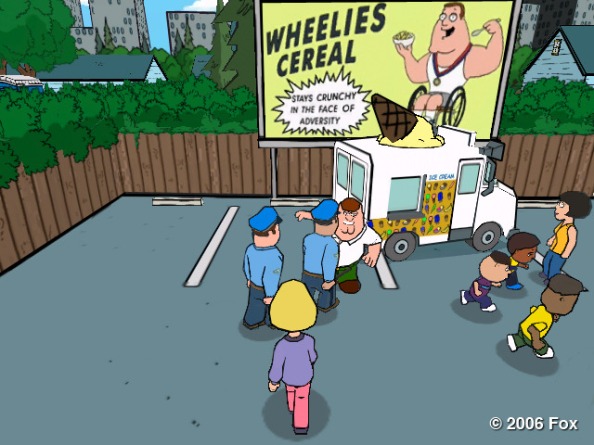 Picture of Joe in the back to remind you how this glitch will cripple you permanently.

So far, this has been a particularly difficult review for me to write. In part it’s because my attention is split between job hunting, a perpetually hungry cat, a polar vortex that’s freezing Duluth to the point where my car won’t start and every time I try the key shatters in the ignition, and the trauma and disbelief over the fact that a few paragraphs ago I used the phrase “Metal Gear Solid meets Jerry Springer.” However, the biggest challenge in reviewing the game is that apparently in Peter’s second level, if you are killed by one of two policemen after the midway checkpoint, they do what policemen do best after shooting a black man (Peter Griffin: Husband, Father…Brother?): they move on with their lives. They don’t come back after you respawn. And since, in true beat-em-up fashion, you can’t move on with the level until you kill all the enemies, so you end up wallowing in an existential crisis between a porta-potty and an ice cream truck, left with nothing to do but kick the shit out of some kids and their moms. After their corpses are dead and rotting, you might amuse yourself by head-butting the truck, but eventually all you are left with is a headache, a pile of useless iron, and a few square meters of Quahog where you can do nothing but wander in circles, contemplating the inevitable need to end it all and wonder if there’s a new game in your future.

This section looks like fun. Too bad I can’t play it.

So I suggest turning auto-save off right before you go into the porta-potty, or you might be stuck with the constant reminder that the game is shit. Otherwise, it’s not bad.