Totally based on the movie. Not based off the N64 game in the least.

As of writing this, it’s December 16th, and I’m still reeling from a year full of people pointing out every old rich person who dies, teaching for free so I can learn to utilize all the newest research in an environment run by die-hard traditionalists, and wrapping my head around the fact that I live in a country full of people who believe that the complete annihilation of all life on earth is a preferable alternative to electing a president who routinely cleans out her Yahoo spam folder. Needless to say, my recreation time as of late looks less like a shelf full of video games and more like a bowl full of Xanax. However, I did manage to make it through a game or two during this time (even if Anne may have hijacked my 3ds), and in honor of increased global tensions and madmen secretly working with Russia to unleash mass destruction on the world, here’s the remake of Goldeneye.

The original Goldeneye for the N64 was, of course, the stuff dreams are made of–the angry, violent dreams of a ninth grader with social issues. Probably the best game on the system other than Ocarina of Time, it was more popular than porn for a year or two, partly due to a multiplayer system that revolutionized ways to passive-aggressively beat the Living Daylights out of your friends. The game was perfect…so remaking it makes about as much sense as a Lord of the Rings reboot with Gilbert Gottfried playing Frodo, Gallagher as Gandalf, and Larry the Cable Guy as Aragorn. No one ever uses their remake powers for good. Why not remake Resonance of Fate? Or Dr. Jekyll and Mr. Hyde? Or Michigan: Report from Hell…actually, that one’s a game that shouldn’t be remade without a vat of sulphuric acid at the end of the assembly line. But still, let’s remake the lousy games and leave the good ones alone, shall we?

To match the recent films, Goldeneye has been updated to fit the grittier, earthier, Daniel Craigier Bond. There’s something forehead-slappingly ironic about rebooting an outdated formula firmly entrenched in the Cold War by digging a ditch through the Bush era. The new storyline focuses on terrorism, which has become less of a theme with Bond and more of an indication of tourette’s syndrome. Other than a few shout-outs, the basic plot remains the same; the Janus organization wants to steal all the money in England and disguise it as an act of terror. That level of effort may be as smart as trying to get out of a parking ticket by setting the White House lawn on fire, but hey, it worked in Die Hard. Except, of course, for the fact that Hans Gruber set an Olympic Diving record as the first German to do a 100-meter high dive into a hunk of concrete, but seriously, what are the chances that Trevelyan will go the same way? 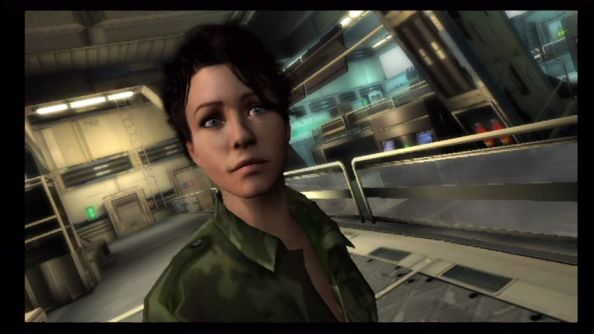 At least the girl is still hot…and you only have to babysit her once.

But aside from the fact that they got rid of Hagrid, Ned Stark, and the douchy boyfriend from Mrs. Doubtfire, how does the game play? Not bad…if you have a plentiful supply of Dramamine and don’t mind Bond glancing expectantly at the heavens for divine intervention every time a small football team’s worth of enemies are trying to aerate your digestive system. Although this game was released on the NDS, PS3 and Xbox 360, I feel like the Wii controls, which handles about as well as a marching band mounted on Roombas, make this version unique—like shopping in the “discount: irregular” bin at Walmart. Personally, though, I don’t think James Bond is the type of spy who’d go on a mission dressed in pants with one leg that stops at the knee and a shirt with a third sleeve and a hole for an extra head. 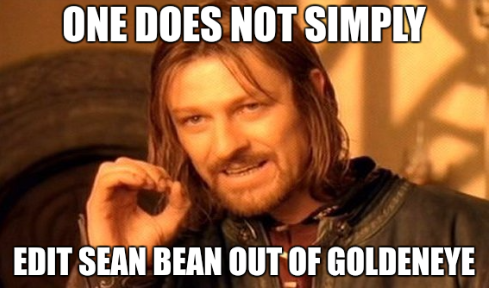 James Bond isn’t really an action hero (unlike all those guys who do rush into battle with six-fingered gloves and boots with toes at each end)–his movies are spy thrillers. Just like how action is the genre of choice for people who would rather exchange bullets than lines of dialogue, people who watch spy thrillers and play their games tend to want something with a bit more intrigue. The original Goldeneye had that. There were fast-paced battles, but there were also slower, tenser moments, stealthy sections, and mission objectives that required a little more thought than playing “follow the bullets” and “corpse hopscotch.” The new Goldeneye, coming from the same era as Final Fantasy XIII, took all of those classic gameplay features and chucked them out the window…or, rather, down the hallway. While ostensibly, the game gives Bond objectives, most of them amount to getting the player to a certain point in the level, which triggers a cut scene or asks the player to hit the action button, but oftentimes you get credit just for being there, as though the game feels the need to pass out participation ribbons to the special breed of player that now dominates the scene who can’t handle much more than your average Madden or FIFA game.

In addition to being a game where running the gauntlet is less free-roaming than playing Gauntlet, it also gives Bond constantly regenerating health. It may be a little hard to believe that even a super-spy can recover from a shotgun blast to the lungs by crouching behind a cardboard box to catch his breath, but since most good video games and Bond films stretch my imagination enough to be considered a Medieval execution method, I’m okay with that. They even manage to counterbalance Bond having the regenerative powers of a Gecko hyped up on Red Bull and cocaine with enough of a challenge that the game doesn’t feel too easy or too hard. However, they mostly accomplish this by throwing a sizable chunk of the Russian army at you in every level, which again takes away from the suspense and mystique of a spy thriller and turns it into ten hours of the opening scene of Saving Private Ryan. There is a classic mode where you pick up body armor and don’t regenerate health, but you still have to face down the entire population of Eastern Europe, so the only thing it balances out is the explanation why each enemy still jumps out at Bond after witnessing him murder all their colleagues.

From Maxwell Smart’s shoe phone to Frasncisco Scaramanga’s golden gun, spy gadgets top off the genre like a cherry on the top of a sundae of political intrigue, murdered diplomats and at least two or three assumed STDs. A lot of a story’s success can be inferred by the covert weapons in unlikely places—who can talk about Goldfinger without mentioning Bond’s car or Oddjob’s hat? So it says a lot about the reloaded Goldeneye equips the player with…a smart phone? My, my, how chic and trendy. Is there really an app for everything? Garroting an assassin in a Finish sauna? Placing explosive charges on the insane billionaire’s secret underground bunker? Is there an app for knifing a bloodthirsty shark when your hands are tied behind your back? Do we now have to picture Bond playing Angry Birds between scenes? Or flipping through an overactive Tinder profile while sitting on the toilet? That may sum up the big problem with this game. It’s not that it deviates from the original, removes Robby Coltraine, Sean Bean and Pierce Brosnan, or has Wii controls that alternate between feeling like you’re trying to sketch on a pad three meters away with an extremely long pencil and trying to brush away a spider you just found crawling up your neck tie. It’s that it takes the extraordinary life of a spy and turns it into something commonplace.

There’s a multiplayer, too. I didn’t bother.