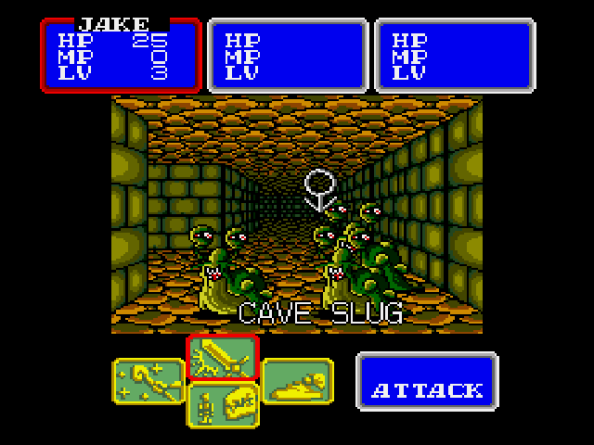 Lecherous slugs. Hermaphrodites, if the cursor is any indication.

Sequels are a strange phenomenon, and opinions of them tend to be so emotionally charged that people fire out accidental kamehameha waves if you bring them up. Movies like Batman and Robin, Jaws 4, Cabin Fever 2, and anything from Saw…let’s say 3 onward…are generally experiences slightly less favorable to ringworm, what with characters as interesting as your local H&R Block staff and plots that make C-Span look like a Quentin Tarrantino masterpiece. However, mention video game sequels, such as Mega Man 2, Final Fantasy VI, Resident Evil 4 and Silent Hill 2, and fans will melt down their own gold fillings to make a trophy for the game designers. I’ve played two of the Shining Force games before, and while I haven’t launched into auto-dentistry practices yet, I can get excited enough by them to pry the lid off the series and dig around for game #1. So today I’ll write about Shining in the Darkness, the crawly, grindy RPG for the Sega Genesis that somehow metamorphosed into a brilliant tactical game by the next instalment, like a maggot transforming into a unicorn.

I’ll tell you what I’m not selling…cocaine. I think you’ve had enough.

Shining tells the story of a young boy chosen by mystical forces to be the hero. When his father accepts a job as the winter caretaker of a secluded hotel, the boy must use his supernatural psychic powers….wait, no, that’s not right. It’s just a collection of cliches. Evil wizard, kidnapped princess, chosen hero, incompetent king who would rather send lone adolescents into a major combat area than his army of seasoned veteran knights. The game doesn’t really tell a story so much as tries to justify dropping you into a pit of monsters and sealing off the exit as quickly as possible. The titular “shining in the darkness” is probably nothing more than the radioactive glow of cramming so many unstable tropes together in one game. Even Wikipedia discusses the story condescendingly: In a 2009 interview, Hiroyuki Takahashi (credited for “writing” and producing the game) recalled… ; The overly-simplistic storyline presents more of an imitation attempt at fantasy narratives, similar to a third-grader trying to write his own novel, or Terry Brooks writing The Sword of Shannara.”

I prefer to think of this less as an abusive scene where a hero is punished for saving the world, and more in the lines of, “Hey, this is getting good…”

But in a way, the simplistic design makes the game appealing. One town for shopping, one castle for major story events, and one dungeon, where you’ll spend the bulk of the game committing the standard, tireless acts of murder so common to the role-playing genre—you know, like Call of Duty, but with sentient crabs instead of Middle-Easterners. The dungeon takes the form of a labyrinth, and between Phantasy Star, Brandish, and Shining in the Darkness, I’ve spent so much time in labyrinths lately that I’m thinking about putting on a frizzy blond wig, shoving a codpiece down my tights and spouting David Bowie songs. You navigate the maze from a first-person perspective, which in these older games can sometimes feel like trying to follow a set of Google Maps directions with a plastic Viewmaster duct taped to your face, but the layout is actually designed well enough that you don’t usually end up treading a path around the same circular hallway for thirty minutes before you even realize you’re not making any progress. In fact, if you explore with a mindset of consistently following either the left or the right wall, you’ll generally find that maps only slow you down. [Note: Maps will not slow you down…unless, of course, you find the ones on www.gamefaqs.com that only have 70% of the notable locations marked. My recommendation? Play the game the old fashioned way…with a book of graph paper and a pencil.]

In Soviet Thornwood, egg cooks you.

The game carries a certain nostalgic charm, a description which unfortunately carries with it the implication that the player will wave his sword in front of him until so many monsters have died that the decomposing gases trapped at the bottom ignite the large mountain of bodies you’ve accumulated. I know I criticize almost every older RPG for mass murder, monster holocaust, or some other variation on attempts to purge the biodiversity from their game worlds until even the Tea Party would get bored with the racial purity, but it does tend to detract from any enjoyable gameplay in a lot of otherwise great games. In Shining in the Darkness, the enemy encounter rate is so high that it feels more like a Japanese subway car than a gladiatorial dungeon, but the game loses a lot of its sexiness when you start murdering monsters who are just trying to look for a place to sit on their way to work. Unfortunately, you need to kill every living being you stumble across (except for, you know…the princess. But you also don’t have to rescue her, either.) if you want to progress enough to beat the game. 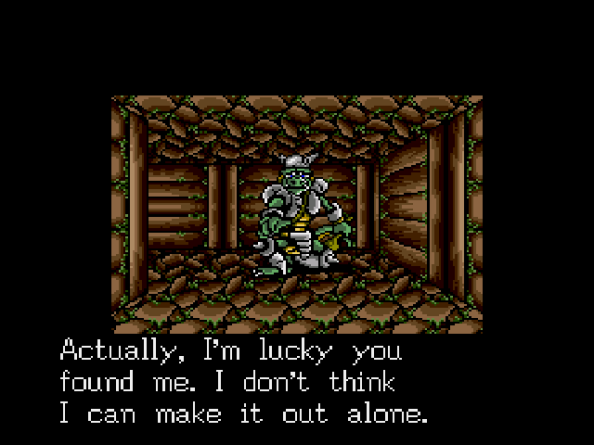 While fun for the first half of the game, Shining in the Darkness really starts to lose its appeal once you’ve finished your test of merit to enter the upper floors of the labyrinth. At that point, the game turns into an endurance test, pushing your patience at grinding. With each successive attempt, you make just enough progress to grease the way for the next attempt to thrust deeper. The monsters become just a little more complacent, and you can go faster and faster each time, but you have to spend a good long time working on penetration in order to…I’m sorry. I got distracted. But the game tends to lose scope of why it’s fun to play by that point. It becomes clear that nearly every enemy you face dies at the slightest glare from the hero, or passes out with a double-tap from your two assistants. Meanwhile, the enemies slowly wear you down like a swarm of earthworms wrapped in sandpaper.

Malligator deals 41 points of damage, then strikes a pose to show off his bitchin’ hair.

At the beginning, Shining in the darkness comes across as a fun, nostalgic dungeon adventure, elegant in its simplicity. By the end, it turns into more of a Netflix marathon as you mindlessly follow walls through what must be Woodstock for monsters, until your hero with the peripheral vision of a rat with its head stuck in a toilet paper tube has enough HP to withstand the magic attack that the boss spams at you. But, of course, once you’ve invested that much time into a game, you keep going with the faith that the game will pay off like the Nigerian Prince you know it to be.