Mickey Mania is described in the DSMV as the compulsive need to encourage Disney to make crap by handing them your money. Or in George Lucas’ case, Star Wars.

…This is so disturbing, even Mickey’s life meter is trying to hitch a ride out of town.

My job here isn’t an easy one. As I don’t expect you all rush to ebay (as much as one can “rush” to a website) to find copies of these games, and that you’re not seriously mulling over whether or not to play these and need an expert’s opinion to tip you over the edge one way or the other, the only  possible reason you’d read this blog is that I make the posts mildly entertaining. Even considering I’ve dropped the challenge where I don’t use any form of the verb “to be” (go back and check entries from my first two years of posting), I have to find just the right games to make fun of. If a game is too good, it may be hard to find flaws in it, but if it’s too bad, I have to worry about properly expressing the comedic aspects, which aren’t as easy as just showing where a game misses the point worse than Burger King’s attempt at green ketchup (not to mention my concern with too many manatee jokes). But then I find those Goldilocks games, the “just right” combination  of playable and pointless that makes them stringently bland…and I have to find a way to make them at least interesting enough to talk about.  Enter Mickey Mania: The Timeless Adventures of Mickey Mouse, a perfect blend of half-assed and carefully-developed, released to commemorate a birthday that no one cared about by revisiting short films that no one had seen.

…I don’t think Disney has ever done anything as disturbing as this.

People love celebrating milestones, but when they do, they usually choose nice round numbers: 10 years, 25 years, 50, 75 and 100 all make the cut. But for whatever reason, Disney thought Mickey’s 65th birthday was a big deal. I wonder if most beloved cartoon characters fade into obscurity around their 63rd or 64th year (Poor Jeoffrey, the Peccary). When Disney came up with the idea of commemorating their contribution to the order of rodentia with a video game, they only had six months to hit their deadline. Fortunately, they decided to take a little more time to make the game playable, but not enough to actually give it anything unique or innovative. They thought the game would be carried by having actual Disney animators! work on the design, missing the point of a game in that special way that my mother misses the point when she asks why I still play Super Nintendo games when technology has improved so far over the last twenty years, then goes to the closet to pull out Scrabble and Monopoly.

So Mickey’s 66th birthday present plays as an okay platformer, if not a consistent one. In general, Mickey jumps through levels avoiding enemies, most of which he can defeat by jumping on their heads. He also collects marbles, which he can throw at enemies. Beyond that, each stage seems to have been put together by designers taken from different parts of the Small World, selected in the manner of 18th century slave ships, where they are chained to their work with no common language to talk to the designer next to them. Three of the levels have bosses–although apparently in non-North American releases, more stages have these. Most stages allow use of marbles, but Mickey loses them every so often (much like the designers). Almost all the stages scroll from the side, but one rotates around a tower while another features Mickey charging straight at the player like an angry moose (as he is, in turn, chased by an angry moose). Mickey apparently is looking for various avatars of himself in some weird, meta-identity crisis, but a few of these avatars make no appearance within the stages themselves.

Why does this look obscene?

Probably the worst oversight of the design, though, is that they based each of the six stages (seven for non-SNES releases) on classic Mickey cartoons except for one on classic Mickey cartoons that pre-date 1950. Only The Prince and the Pauper stage was based off a cartoon in players’ living memories; the rest are even older than my father. This wouldn’t be such an issue today, but they weren’t commonly played cartoons, and Disney had the audacity to release this game almost a decade before the invention of youtube, so none of these levels had any meaning for me. 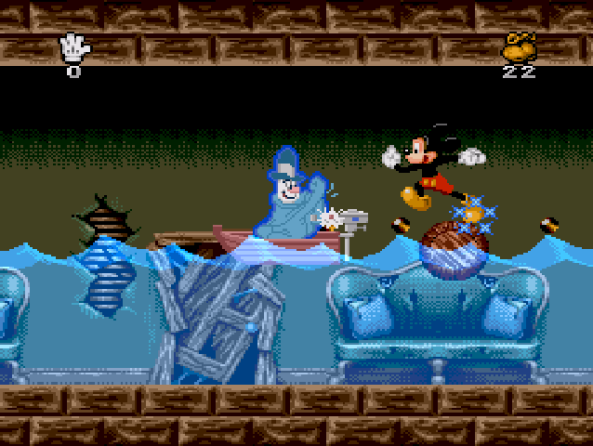 Rather than walking on the ground, you can walk on a barrel.

But they were designed beautifully. The game is nice to look at and puts in key details that–unbeknownst to players–come straight out the games. The Steamboat Willie stage even includes a gradual shift from monochrome to color (A curious choice, to say the least, since only the final stage is based off a cartoon animated in color. Perhaps they just wanted to show up The Wizard of Oz. Take that, filmmakers from 60 years ago!). The game is pleasant to look at and not too difficult, so you can get through most of it in a single sitting, even if it has all the replay value of a chicken sandwich. And the inconsistencies actually make it interesting, as you’re not stuck simply jumping on heads for two hours like a cute, child-friendly sadistic serial killer.

Congratulations on giving us money for this game you finished in an hour! Now give us more money!