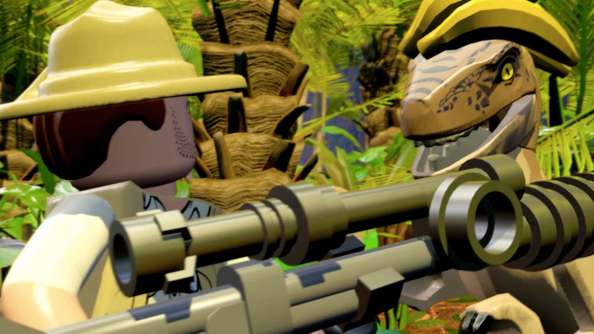 We here at RetroCookie pride ourselves in our preservation of vintage games, which compels us to give credit to game makers who do the same (although don’t ask us what compels us to speak in the Royal We, as we still have much evidence to support the idea that we only have one body and very little control over household pets, let alone entire nations). To that end, I’ve covered modern 3DS games such as the Majora’s Mask remake, the Ulitmate NES remix, and even newer games based around the charm of the classics, such as the Legend of Zelda: A Link Between Worlds. With that spirit at heart, I’d like to introduce a new 3DS game to the notches on my belt, Lego Jurassic World, which falls under the retro gaming category for reasons I will expound upon now. 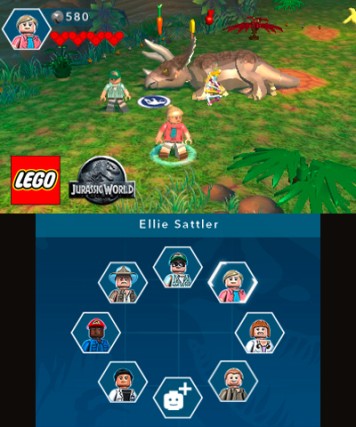 A needlessly huge cast of characters in which more than one person will routinely dive up to their ankles in shit deeper than Spielberg’s first plan for Jurassic Park 4!

Okay, you caught me. I just don’t have a PS4 or a WiiU. But with games like Bravely Default and Link Between Worlds on the horizon, and all my other NDSs worn almost to the breaking point, I figured a 3DS would be a wise purchase. Plus it doesn’t have creepy, voyeuristic tendencies like the XBox One. So to tell the truth, I own that one modern game system, and I do occasionally play it, and I struggle to get through games quickly enough to write a weekly entry with enough time left over that I don’t have to give my students lessons on metaphor and character development in Bubble Bobble. So this week, I give you Lego Jurassic Park, a coincidentally perfect game for playing in the ten minute breaks between classes. 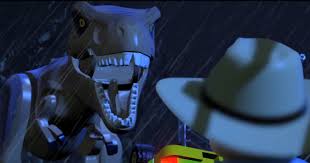 If you read my review on the Lego Star Wars games, you’ll know the series has one or two issues with originality in game play. Inevitably, the games degrade into a process of collecting studs to purchase unlockable characters which help you collect more studs, and I strain to think of anything that such a cyclical experience might augment other than a walk down a moebius strip or a finely tuned, professional relationship with a prostitute. However, like the prostitute, Lego games may need to offer something other than a sense of humor and playing fast and easy if they want to keep my interest and coax me out of 20 bucks for cab fare. (Ah, comparing Legos to professional sex workers. It’s times like this that I wish anyone actually read this blog.) 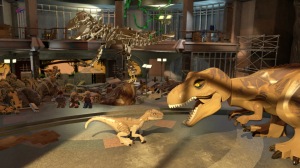 I want a good clean fight. No bites below the…uh…belt?

Don’t get me wrong, though, there is something very zen about the act of romping through tropical environments, smashing everything into a zillion tiny lego bricks at the slightest touch, especially considering that realistically your characters would spend five minutes prying each piece loose with a butter knife that won’t fit into the crack and walking away with sore hands. Lego Jurassic World takes this stud collection (and as I say that I resist the urge to continue making sex worker jokes) very seriously. Traveller’s Tales games has always treated combat in their Lego series as more of an irritating formality, like renewing your driver’s license, waiting for a waiter before eating at Old Country Buffet, or telling your friends that their newborn babies don’t look at all like someone dipped George W. Bush in a bathtub full of Nair. In Lego Jurassic World, though, they have almost eliminated combat entirely, save for a few levels in Jurassic Park II and III where you punch a few compies and trample a few InGen workers with a stegosaurus. 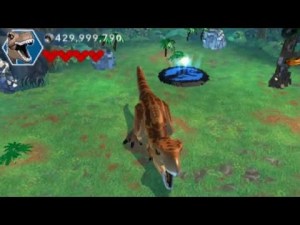 Goin’ down to Nublar, gonna eat a lot of people.

That last bit, though, adds a much needed touch of originality to the series. In addition to wandering around as your choice of any of a million worthless characters (When the novelty of playing as Dino Handler Bob loses its lustre, spice it up by having an affair with Dino Handler Vic!) , the game also lets you control most of the movies’ animals. Furthermore, you can unlock access to the Hammond Creation Lab, where you can play with genetic coding to mix and match different features into custom dinosaurs, thus proving that Traveller’s Tales missed the point of all four movies about as much as those people who think Harry Potter promotes devil worship. Certain secrets actually require this genetic Frankensteinery, as do two bonus areas that allow players to take full control of hungry dinosaurs as they eat, trample, gore, or hawk poisonous loogies at unsuspecting park staff. 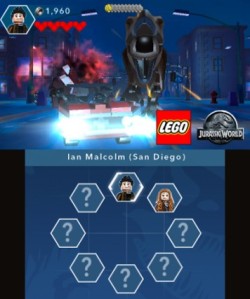 Lego Jurassic World has more of a puzzle-oriented design than other Lego games. Normally, puzzles would earn the game a black mark by its name, followed by a swift hammer blow to the cartridge and, if I feel especially generous that day, a steady stream of urine. However, puzzles in this game simply means picking the right character to activate whatever interactive element might block your path at any moment, more of a formality than a puzzle: “Hello, there, Jake. Do you have a character willing to dive head first into this steaming pile of triceratops shit? Oh, I’m sorry. Here, fill out these forms and pay a small fee to unlock a character with a severe hygiene deficiency, then come back on a later playthrough.” Now, my regular readers (almost typed that with a straight face) might remember my Twilight Princess review where I described such mechanics as needlessly enforcing a developer mandated sequence of events without actually giving the player anything fun to do. Well…okay, so I have a point, and that point still stands here. 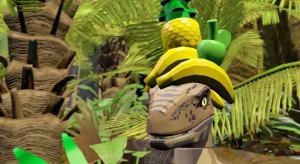 However, I played this game through to completion, so it must have some strong points. Earlier, though, I mentioned that Traveller’s Tales previously treated (and other companies still do) combat as a requirement for games, as though making a game without some type of fighting would create a vacuum that would implode, sucking the console, player, and northern hemisphere into oblivion. And since there’s no combat in oblivion, they’d like to avoid that. But as it turns out, games don’t need violence (I know…crushing news to all those bloodthirsty Tetris fans.), and Lego Jurassic World seems to have figured out how to replace that. Stud collecting, for one–simple, yet fun, and for whatever reason human beings have brain signals that light up on hearing a pleasing sound and watching dozens of small objects transmogrify into a score total ratcheting ever upwards. The humor, of course, makes us wait for the next cheeky thing the game will do–I’d recommend the game entirely based on the talking raptor scene from JP3. Also, did I mention you get to rampage as dinosaurs? Those segments might feel short and underdeveloped, but it does include a minigame that lets you target-spit at Newman from Seinfeld. 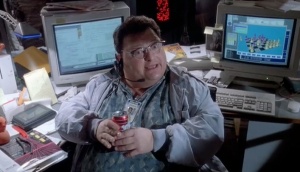