If we think about video games as a family, Mario acts like your workaholic dad, head of the family, but he does just a little bit more work than anyone really wants him to do. Your sister Metroid went off to college and came back for Thanksgiving after discovering feminism, and while she’s learned some fascinating things about science, she can’t talk about it without bemoaning the fact that she needs to hide her femininity for anyone to take her seriously. She brought home this guy, Resident Evil, who talks about surviving the apocalypse with nothing but a lighter, a broken shotgun, a medallion with a bird on it, and some herbs, but he obsesses over guns a little too much to make you comfortable. Your cousin Link has traveled the world, but half the family won’t talk to him because he gives off a strong gay vibe, and everyone else makes fun of him, calling him by girls’ names. Grandpa Chrono Trigger can’t tell you what day it is, Final Fantasy only wants to pay Magic the Gathering all the time, and even though no one really has much control over the dog, Yoshi, Mario insists he’ll take good care of the children. 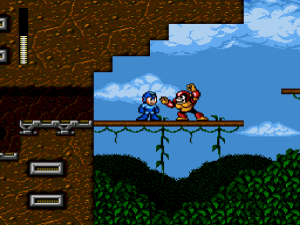 In all this, Uncle Mega Man sits in a corner with Uncle Madden (who started talking about next year’s football game the minute this year’s game ended). Mega Man has some cool stories about his younger days, but they all sort of sound the same after a while. He enjoys his routine, and reacts violently any time someone suggests he spice up his life a bit. His son, X, wants to think of himself as a rebel, but doesn’t realize his dad acted just as wild in his youth. Neither one of them shows much sign of changing, and after a few years they just stop coming to Thanksgiving altogether.

They did a wonderful job of updating the backgrounds and keeping everything else the same.

Now that I’ve taken the metaphor just a little too far, I should introduce Mega Man: The Wily Wars, a little-known release for the Sega Genesis. Released in North America only for the Sega Channel, The Wily Wars serves as Capcom’s own version of Mario All Stars for the Mega Man Series, bundling the first three games, updated with minimal (very minimal) 16-bit graphics and some new content. 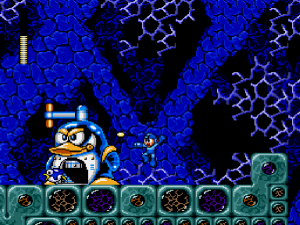 True story, the filename for this picture is Penguin.png

But here the wall I ran into when reviewing Lego Star Wars stands before me with not the slightest dent from the last time my head violently collided with it. What can I say about any Mega Man game that I didn’t cover the first time I reviewed any of them? Aside from a small list of minor alterations, most of them aesthetic, I only need say, “Mega Man still fights robots. Takes their weapons. Manages to let the villain escape for another day.” They updated his sprite, as well as a few of the robot masters’ sprites. Stage backgrounds received a makeover, but as the graphical upgrades peter out as you work upwards through the games, it comes off as a little insincere, as though Mega Man 3 subtly wanted to point out how much prettier she looked from the get-go. 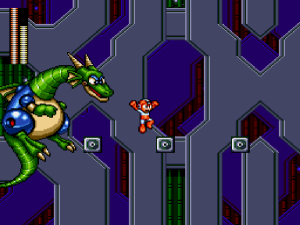 Mega Man taking inspiration from Monty Python and the Holy Grail. Ten to one odds he doesn’t make it to that next block.

But teenage drama aside, some of the changes actually make a difference, especially in Mega Man 2. Capcom eliminated easy mode and it felt like they ramped up the difficult mode in subtle yet obnoxious ways. For instance, the redesigned sprites for the wood shield make it nearly impossible to jump over Wood Man’s attacks without taking damage. Someone on the design team must have really missed the boat with Quick Man, as they toned down his speed to match the other robot masters’, turning him into Boomer Kuwanger with special needs. (He must have seriously let himself go after the series decided not to renew his contract for Mega Man 4. Depression can ruin a robot, let me tell you. No one will take him serious while crusted over in his own rust.) Probably the most obnoxious change involves the Mecha Dragon, which no longer takes damage from the crash bombs…making it the only boss in the game without a weakness. Plus you get to fight it over a giant bottomless pit. Yay. Since Mega Man games fell into the sweet spot (for me) of just the right amount of challenge, the minor increase in difficulty that these tweaks add works for the game play. Too much change, after all, might frighten Capcom.

Yeah…I don’t care how much danger threatens the earth. I don’t want to set one foot in a part of the jungle made out of snakes.

Then I beat all three games and something wondrous happened: original content! A Mega Man mini-game, complete with Dr. Wily’s skull tower and three unique robot master levels (none of which feel the urge to assert their machismo by adding “Man” to their moniker). Plus, this mini game did something I’ve always wanted to do with Mega Man: select from a set of weapons acquired in any of the games. What? You mean he doesn’t have to reformat his hard drive every time he beats up Dr. Wily? I would think after the first few times the old man threatened the world as revenge for not letting him threaten the world, Mega Man would at least keep a few of those outdated peripherals in a box in his closet–you know, just in case.

Realizing the limitations of the original game, Mega Man pioneered the idea of Rock-Paper-Scissors-Lizard-Spock

This adds an interesting spin to the game. Rather than a rock-paper-scissors relationship (or rather, because no one cares about Paper Man, rock-bomb-scissors), the three bosses have a small set of weaknesses, offset by weapons useful against their attack patterns, and the player has to decide what approach to take against them. Also, their design strongly resembles characters from the Ancient Chinese novel, Journey to the West. Like the characters in Dragonball. Because when Wu Cheng’en penned his satirical allegory of Buddhist enlightenment, he really just wanted to break into the anime and video game markets.

After defeating Son Wukong, Mega Man must take his place protecting Tripitaka so that they may travel to India to receive the eight energy crystals to rescue China from Dr. Wily. I think it goes something like that.

For a unique and fairly original Mega Man game, I’d only complain about the length–seven stages in total falls terribly short of what I’d actually want to play. It’s like ordering the unlimited soup at Olive Garden, enjoying your first bowl, and then for every bowl after that the waiter just rips open a packet of Maruchan Ramen. You had the good stuff! You knew what we wanted! Maybe changing the formula a little would do us all some good. Of course, eventually that waiter stopped delivering even the Ramen, evacuated the building, and left you sitting at your table in the dark, reminiscing about your meals of old.