After nearly a month of not writing, final exams, dealing with irate students, and jumping through legal hoops to buy a house with a yard that retains water like a camel with a bladder obstruction, I’ve just finished Resonance of Fate. After finishing Heavy Rain–which ironically now threatens to slide my house into Lake Superior–I thought a good old fashioned RPG would hit the spot and provide me with some enjoyable stress relief after long days of dealing with insane bureaucrats in exchange for a salary comparable to the average burger-flipper, albeit with slightly less job security. A word of advice–when a game’s timer immediately indicates a capacity for triple-digit hours at the beginning, you may want to reconsider going through with it. And about three hours into Resonance of Fate, I already despised it. 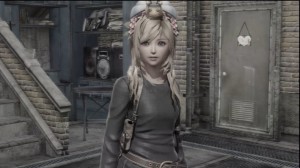 You can do her hair, undress her everywhe-ere! Yes, Resonance of Fate claims its Barbie Doll simulator as its most entertaining feature.

And when I say I despised it, I mean to say I’d rather play Pin The Tail on John Goodman than Resonance of Fate. Trying to walk through an actual mine field would cause less stress than combing through the walkthrough of this game. Learning the finer points of cattle enema application would not only interest me more than the story, it would also feel more rewarding and leave me with a more refined product. I have not hated a game this much since the first time I played through Valkyrie Profile 2. However, I realized that games like Valkyrie Profile 2 and Final Fantasy Tactics only inspired blood-vessel-bursting levels of rage because I didn’t fully understand how to play them. So I gave it a chance and spent some time learning the complexities of the battle system.

So now when I say I despise this game, understand that if any game deserves ritualistic immolation, Resonance of Fate does. I would rather bathe in a cauldron of bacon grease than go through this game again. If you offered me a choice between a PS3 controller currently running this game, or a bare, uninsulated cord plugged into a 120v outlet, I think I would suffer fewer adverse health effects from the bare cord. 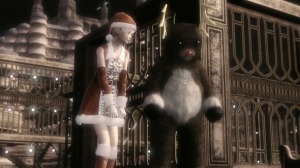 Because who wouldn’t want to dress like a second-rate high school football mascot and chuck toys at kids’ heads? This game manages to take the color out of Christmas.

“Pony up, Jake,” you say. “Stop whining and tell us why you hated it.” Fair enough. For starters, critics have praised the game for its original battle system, which revolutionizes the tired old menu-based RPG format. And it rightfully deserves that credit. A semi-tactical game–like Valkyrie Profile–I really enjoyed the complexity of combat once I finally learned it. But learning took forever. Players can access a virtual instruction manual while in combat, which I found indispensable; mostly because the sadistic bastards locked the optional tutorial. The tutor in the arena offers to teach you the ins and outs of the gun-based fighting style, but only after you’ve accomplished each technique at least once in battle. I hated my Calculus teacher in college, but at least she didn’t turn me away, saying, “Come back once you’ve successfully landed a probe on Saturn!” And if that doesn’t immediately earn it status as the most useless tutorial ever, accomplishing the techniques didn’t actually unlock the tutorial. Sega’s pedagogical style reminds me a lot of your grandfather dropping you into the the middle of Crystal Lake, telling you the dead kid wants to drag you under, and figuring that sheer panic will teach you to swim.

But since no one actually learns that way, I think you deserve a simplified explanation. For starters, you have two types of damage to contend with, scratch damage and direct damage. Only scratch damage really matters, as weapons that deal direct damage have all the destructive power of flicking safety pins at someone, hoping they’ll unclasp and stab someone through their jeans. Deal scratch damage to enemies and their armor by running (and nearly always jumping), and that’ll whittle down their health. However, it doesn’t always stay damage. In order to get it to stop regenerating, use direct damage to make it official. Think of scratch as writing a schedule on a calendar in pencil, and direct as tracing it over in pen to make it official.

Roll for initiative. Pass Go to collect $200, then proceede to the conservatory to make your accusation.

From there, in order to deal damage effectively in any way, you want each character to run between the other two–which uses up part of a gem gauge–for as many turns as you can, then pull off the special attack, making sure each one stands as far apart from each other as possible with no obstructions anywhere along the path. Seriously…your characters can only run in straight lines, and if they so much as nick their elbow on a wall, enemy, or each other, they’ll drop everything and sit there until the others have also given up. Thank you, Sega, for developing passive-aggressive character traits in combat.

The biggest problem with this gem system–other than characters completely incapacitated by the concept of side stepping those pesky support columns–occurs when one of the characters receives enough damage to reach critical status. At this point, several things happen to change the flow of battle. First, you lose the ability to run or perform the special attack. Second, your weapon strength drops considerably and the rate of fire slows to a crawl, sending your accuracy down to the level of Stevie Wonder in an archery tournament. Third, the enemies usually start regenerating health at alarming rates. In other words, Resonance of Fate doesn’t just want you to game over, it wants to make the process as painful as possible. After all, it has three digits in the game timer, and it desperately wants you to use it all. Hitting a critical state led to an inevitable game over except in rare, miraculous circumstances. And it costs you, by the way. Just like in Dragon Quest, resurrection comes with a hefty price. Fortunately, you can’t do a lot else with the money in this game, so if you just keep all your items until you want to buy something, then sell them for the cash, you should drain your wallet to the point where restarting can’t drain anything else from you.

If the barrel of the gun makes the bullet go faster, then twelve barrels ought to make it go warp speed! And with all those scopes, you can’t miss! Do a barrel roll!

For the record, once I got the hang of the combat system, I did sort of get into it. For a while. However, if the game didn’t already have a major strike against it for making me go back to school to get a degree in Resonance of Fate Combat, I rescinded any thoughts of praise when I realized that the technique I described above doesn’t change. Ever. Leveling up appears helps you minimally if at all, and you don’t really learn new skills or abilities. While customizing your weapons offers an interesting side-challenge, it improves them unnoticeably at best (and not at all at worst), and the dozen or so accessories available in the game don’t offer any unique changes to combat or even noticeable addition to basic stats. In fact, the Johnny-One-Note theme runs so deep in this game that they only seemed to use three colors for everything; white, over-saturated gray, and kind of a dull, whitish-gray red. And if Sega didn’t attain the pinnacle of blandness with that, they built dungeons as a series of square battlefields with nondescript, cubic obstacles scattered here and there.

As you can see, this scene contains two and a half colors and zero geographical features. The rest of the game doesn’t have any more color, but it has twice as many features.

Fortunately, even the shittiest of games can pull itself out of the deepest compost heap with a stellar story. Unfortunately, Resonance of Fate doesn’t have a stellar story. I might stretch the bounds of journalistic integrity by claiming it even has a story. I picked up that they lived in a sci-fi steampunk world built like a clock. The three protagonists work as “hunters,” meaning they do odd jobs for people in this society that seems to have an unusually high need to fill things with bullets. The obvious villain appears regularly in cut scenes to wax about his spite for God, which games these days seem to throw in as though the singular ruing of God’s name will earn edginess points and rocket it to the same literary depths of Xenogears. Each person has a crystal, and if it shatters they die. Something about human experiments, which again completely misses the point of why other games succeed. And…I really didn’t follow it any more than that. If it did have any more plot, it lost me in its extensively long side quests and battle sequences. Spreading forty minutes of cut scenes over a 100+ hour game aids the memory about as effectively as a gallon of whiskey and a pound of weed.