All right. This will show up that smug bastard from Duck Hunt. Look at my retriever!

So I had originally planned to post about Skyward Sword today, but something came up: Jurassic World. Not only has Hollywood finally realized that they don’t have to write sequels by running the original screenplay through a shredder and then taking a dump on what comes out, but they chose Jurassic Park to learn this lesson! Back in 2007, they had announced plans for a movie about genetically engineering raptor-human hybrids for use in Iraq; then Michael Crichton died (*sad*) and Spielberg said, “Why not make a good movie instead?” And Jurassic Park! The movie that gave 10-year-old me more thrills than Michael Jackson at a boy scout convention. Every night, lying in bed, I’d watch my door knob, waiting for it to jiggle, and for the raptors to come in and find me. 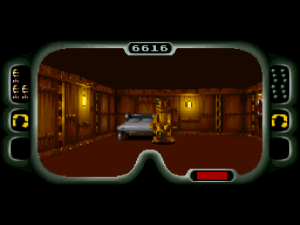 Uh, sorry to wake you Miss Raptor, but, uh…I need to kill you.

Naturally, Jurassic World brought me back to my ten-year-old self, and since I doubt Spielberg will hire me to write JP5 (I have some ideas, Steven, and I’ll work for free, if you want to talk!), I decided to go back to some old Jurassic Park video games, in no way intending to capitalize off the recent surge of people searching for the movie, mosasaurus, velociraptor, indominus rex, Chris Pratt, Bryce Dallas Howard, Owen, Claire…have I missed any? Uh…cool Indian helicopter guy…meh. I’ll get them in there somehow. Anyway, since I didn’t plan this at all, and since I’d like to do occasional videos (watch out, JonTron!), I went to the game I had played most often and, of course, actually own.

In 1994, Ocean Software released Jurassic Park for the SNES to…well, to stores willing to sell the game. It didn’t make huge news. It didn’t develop much of a fan following. Developed at the tail end of the NES life span, versions for the NES, Game Boy, and several Sega systems all came out together. For all practical purposes, this game appeared as nothing more than another licensed video game cash grab. Gameplay involves…(what? Did you expect me to disagree with that? Say that critics vastly underappreciated it? Honestly, I think it earned the reception it deserved.)

Gameplay involves wandering around the park, blowing up the absurdly high population of predators, accomplishing missions to restore the park to order so you can evacuate and let nature reclaim it. Yeah, that doesn’t make a lot of sense to me, either, but I guess you need something to do. These missions include harvesting raptor eggs, fumigating the raptor nest, blocking raptors from entering the visitor center, and clearing raptors off a ship bound for the mainland (and also giving it orders not to sail, just in case). The game derives most of its disproportional hatred of raptors from the book, rather than the film, and even contains some animals, like the compies, that only appeared in the novel. 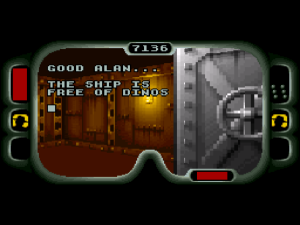 This mission assigned by Dr. Flintstone.

The film’s characters all issue hints and commands to you (as Dr. Grant) from a safe distance, presumably already off the island. Of course, none of them bothered to give you their ID cards before they left, and instead scattered them around the island, often in dark, claustrophobic rooms filled with dinosaurs and behind locked doors. Thanks guys. Furthermore, Dennis Nedry appears with deliberately malicious advice; obviously because an underappreciated, disgruntled computer nerd engaged in industrial espionage clearly cast his lot with the dinosaurs and wants all good humans dead. 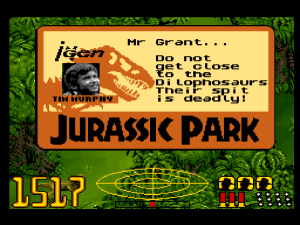 Yeah. That stuff can make you go blind. Wouldn’t it suck if I couldn’t see the dinosaurs jumping out of the trees at me?

For all the messages you get from people, they never clarify any details, making them less helpful than Miss Cleo and an army of psychic friends. Block raptors from entering the visitor center? Maybe you could have told me that, in a game where you don’t interact with the environment, you gave me one piece of furniture that moves! A lot of times, their unsolicited advice pops up right over a dinosaur ambush. Tim pops up to say, “Don’t shoot the gallimimus! They might stampede,” and ten seconds later when the message vanishes from the screen, I find a raptor flossing with my intestines. (Almost as though she waited for just the right moment…clever girl!) 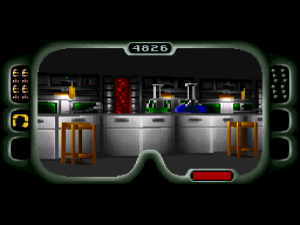 While most of the game gives you an overhead view of Dr. Grant, it switches to first-person when entering buildings. Grant doesn’t have a lot to fear here, as the only damage comes from looking left/right when entering a room, only to find the dinosaur on his right/left. Raptors walk back and forth or charge straight at you, and dilophosaurs stand there and spit. Unlike their outdoor counterparts, they take significantly higher damage, and usually explode if you so much as look at them disapprovingly. Any challenge in the first-person segments comes from the labyrinth of identical rooms with no reasonable floor plan, map, or distinguishing features to help you figure out where to go. Most buildings have multiple floors linked with elevators, the largest of which–the ship–has five stories to explore and get lost in. Apparently they decided that skyscrapers have excellent buoyancy. 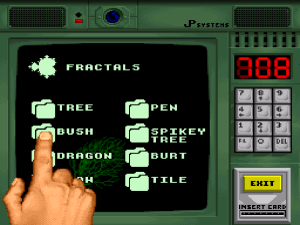 The computer interface makes up for its obnoxiousness by offering user settings, like desktop backgrounds. Because what can model chaos better than a Bush? (I think Jeb may have discarded that slogan…)

With no saves or passwords, the game can take upwards of four or five hours to finish, so make sure you don’t have anything going on that day. I first beat this game in 8th grade, staying up late, tag-teaming the game with friends. Jason had just got a dial-up internet connection and I guess game walkthroughs seemed like the best thing for people to upload at the time. Six hours after starting, Jason had control of the characters, I relayed information from ol’ dial-up Bessie, and Chadd sprawled out on the floor with a migraine from focusing on the screen. But we made it. At roughly 2:00 am, we finally got to the helipad and evacuated the island…only to find out that the game’s ending just played the introductory booting animation in reverse.

Uh…so…can I assume this means game over?

Meh. Whatever. I love Jurassic Park. I read the novel at least sixteen or seventeen times, and recently started reading it to Anne, who as a former researcher, occasionally stops me to explain that she used to do what Crichton wrote about, and how he accurately described science a quarter century ahead of his time. She has a thing for the compies, so one of these days I expect to come home to a herd of chicken dinosaurs. But while not all of the franchise’s installments live up to the novel or the original movie, I still get excited about dinosaurs in my thirties. Chris Pratt made an excellent Alpha raptor, indominus rex proved surprisingly effective as a villain, and while I like that the T-Rex came back for a cameo at the end, we all know that the mosasaur really saved the day. So I hope you enjoyed today’s entry; if not as funny as some of my others, hopefully you’ll appreciate the gushing over Jurassic Park, The Lost World, Jurassic Park 3, Jurassic World or, if the Mario trend in naming continues, the upcoming Jurassic Park 64 and Jurassic Galaxy.

I’ll let you know if Spielberg asks for my script ideas.