I have to run! I could never hope to defeat a lone ninja turtle severely weakened by a fight with Rocksteady! I’ll have to wait until later!

What practical application could this vehicle have? Even assuming NYC didn’t purchase this with tax dollars, someone had to have built it and then marketed it to super villains.

In 1989, Konami published two Turtles games–one for the arcade and one for the NES. You might remember the NES game either from the box art that featured Raphael posing with three of his clones, or from the crushing disappointment everyone experienced when they brought the game home and found out they still had to save up their quarters to play the game they actually wanted. While this may have caused two or three…million…people to overlook an excellent–yet difficult–game, I’ve written about that elsewhere. Konami had the more noteworthy reaction to this, realizing people might actually want to play certain games under conditions other than standing up in crowded hovels of jet-engine level noise with a queue of angry kids behind you waiting to play and three beside you trying to mooch the remainders of your dwindling pile of quarters away from you. Roughly a year later, Konami presented Teenage Mutant Ninja Turtles II – The Arcade Game on store shelves as if they had planned on doing that all along.

While I have to hand it to Konami for faithfully adapting the Ninja Turtles cartoon, I also have to applaud them for scaling down an arcade game to an 8-bit system without Michael Bay-ing the quality (yes, you heard me. A coin-eating, side-scrolling beat-em-up game with virtually no plot has more class than any Michael Bay movie I’ve ever seen). I played through both the MAME and the NES editions before writing. Generally, playing an arcade game for free has all the thrill and excitement of shooting craps for sock lint and twigs, so I didn’t exactly expect to need an industrial solvent to unglue myself from MAME. However, I want to say that the NES game stands on its own as the finest gem that ever crawled from the sewers of New York City. Despite scaled-down graphics, most stages remain unchanged except for a few areas (including one complete additional stage), two or three boss battles, and shameless product placement on the part of Pizza Hut. Play control remains smooth, giving the player two whole attacks!–the characters’ weapon, plus a flying ninja kick harder to aim than a bucket of pachinko balls.

Raph needs to double-check his sights before his next jump.

Character design, unfortunately, doesn’t distinguish between individual turtles, though. Although I understand this design for an arcade game. In the original NES game, I tended to use Leonardo and Donatello. Why wouldn’t I go for the turtle with the pair of sharpened blades, or the guy with a two-meter reach? I imagine late-comers to the arcade cabinet wouldn’t have appreciated the others saddling them with Raphael, the ninja trained in the art of hitting people with a blunt metal rod from a distance just far enough away that the enemy can uncross his eyes. So they shrunk down Don’s staff, blunted Leo’s blades, and added a good deal of oomph to Michaelangelo and Raphael. But if the turtles seem oddly underpowered, fear not. To a limited extent, the player can interact with the environment, hitting conspicuous objects into enemies. Granted, we may have preferred a Special Attack option, but with only two buttons, I guess we’ll take what they offer us–apparently a world where chucking a traffic cone at a trained warrior hurts twice as much as stabbing him with a sword.

What traces of a story I found roughly reprise the plot of the original NES game–perhaps because Konami developed the games along side each other. The turtles begin atop a building–where you may expect to find sewer-dwelling creatures–with Splinter. Splinter points at a burning building and astutely observes “Fire!” Our half-shelled heroes miraculously divine the correct interpretation from this–that Shredder has kidnapped April (the character, not the porn star) and that they need to chase Bebop and Rocksteady and some other villains from the cartoon to get her back. Halfway through the game you rescue her, but keep going (because…why not?) until you rescue Splinter. 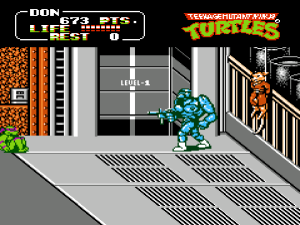 Wow, you know what would really help right now? If someone with jonin ninja skills–or at least sharp teeth like a rat–could break free of that string holding him and give me a fucking hand!

Wait, Splinter? Didn’t we just see him on the rooftop? Did Shredder kidnap April and start that fire just to lure the turtles away from the rat sensei? And if the turtles didn’t need so much as a ransom note, they must have just assumed Shredder intended to…oh, just take my quarters already! I can forgive the lame plot. I can even forgive April for playing into the damsel-in-distress cliche. After all, a reporter doesn’t need ninja powers to do her job. She just has to act charming, know where to find interesting scenes, and look good on camera. Much like a porn star. But how in the hell does Splinter keep getting kidnapped? Every time the Foot Clan comes knocking, the legendary ninja master somehow doesn’t have so much as the skill to squeeze the last of the toothpaste from the tube, much less an ounce of stealth or offensive technique. Maybe, Splinter, you could put up slightly more resistance than Princess Peach? Just once in a while? Show us your moves? Meh. Whatever. National Geographic just told me that elephants can experience symptoms similar to PTSD. Maybe rats can get Stockholm Syndrome. 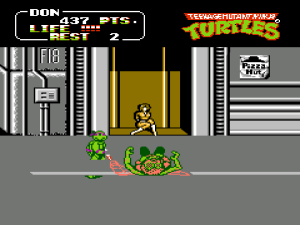