Does anyone else think the zombie craze may have overstayed its welcome? Once hailed as a symbol of our fears of a conformist “other” waiting in the shadows trying to strip us of our thought, reason and individuality, and later re-imagined as commentary on our culture of needless consumerism, the effectiveness of everyone’s favorite decomposing, foot-dragging, moaning monsters on a quest for brains–despite the fact that they only ever really quested for brains in one movie in the mid-1980s and a handful of zombie spoofs–may have hit its zenith with the Dawn of the Dead remake, World War Z, and Shaun of the Dead.  Considering that the most recent of those came out eight years ago, the intervening time has just mocked us, creating a widespread conformity to the idea of shelling out as much money as we can for the latest zombie movies, games, or merchandise. Enter Dead Rising, a fairly new series by Capcom set in a world that has the zombie apocalypse under control–mostly–and has learned how to exploit them for fun and for profit. After I learned that players saved their games by using the restrooms, I made an offhanded remark that “I may need to play this game,” after which I could not convince Anne that no, I didn’t really want to play a game solely on the basis of a witty save point. She insisted on buying Dead Rising 2 and forcing me to play it so she could watch it. She got bored and lost interest after the first hour or two.

Dead Rising 2 follows Chuck Greene, our low-browed, sloping-foreheaded motocross hero who keeps his young daughter, Katey, in the most luxurious of anti-zombie medications and portable Mega Man games by appearing on the reality TV show, Terror is Reality.  Contestants on this motocross competition rig their bikes with chainsaws, and then plough through an arena full of zombies to score points. Naturally, this draws the ire of the People for the Ethical Treatment of Zombies, and their leader, Stacy Forsythe arrives in town to protest. However, when an unexpected outbreak occurs, Chuck, Katey, and Stacy find themselves in a safe house together…at which point Stacy forgets her anger with Chuck, her desire not to kill zombies, and any character points which might make her at all relevant to the story.  Some obligatory arguments occur in the safe house, then they task Chuck with venturing out into the mall–apparently all this has happened in a mall–to search for survivors and Zombrex for Katey. Stacey stays at the safe house, scanning for survivors on the mall security cameras, and every five minutes or so she’ll call Chuck on a two-way radio–usually when zombies have him pinned down and he can’t answer, or when he wants to quietly sneak by them–to tell him about another survivor.

If it sounds a bit muddled, then I’ve described the game well enough. The story starts off weak. It has some interesting points, such as discovering who framed Chuck for causing the outbreak, but it doesn’t really become coherent until near the end.  The inventory management feels a lot like digging through an overstuffed pocket looking for a dime, and the controls take some getting used to. Still, the story eventually comes together, I did eventually master the controls, and I even leveled up enough that the bosses didn’t completely rip me open and use my squishy carcass as their own personal sandbox. One thing, though, ruins this game like nothing else: the timer.  Adding a limit to every event in an otherwise sandbox-ish game had about the same effect as adding a third Austin Powers movie, two Matrix sequels, and a Star Wars Holiday special to their respective series; nobody wants to give their time and money to induce an aneurysm. 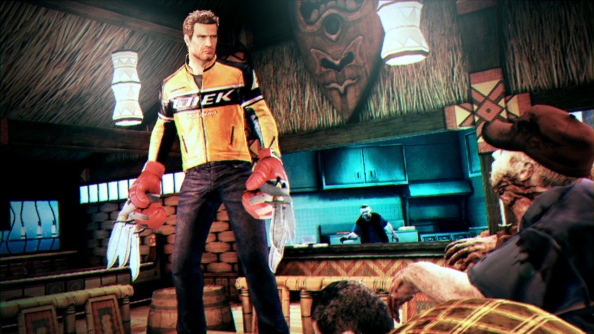 Look at those! Knife gloves. Pretty cool, huh? I couldn’t ever find the parts to make them.

See, people like the idea of having free run of a mall, and Capcom designed this interactive environment using notes stolen from Katamari Damacy.  Rewards for leveling up or rescuing survivors include combo cards, blueprints for combining items into eclectic weapons. Unfortunately, none of that matters because of the timer. With Stacy hounding you every five minutes to rescue someone else at the opposite end of the mall, I didn’t have any time to fight zombies on my way from place to place, let alone explore the game’s environment and look for items. If I built weapons, I usually made the first combo I earned because I could find the items in the safe house, and then I’d immediately race against the clock to get to some jerk who would ultimately make me pay for the privilege of rescuing them, or to watch their crazy cabaret show, or to give them something they could easily pick up off the ground themselves.

The game theoretically encouraged combo weapons, but mostly in the way that my Sunday school teachers encouraged me to pray–they couldn’t give a reason, admitted a lack of visible benefits, but I simply needed to do it anyway.  Likewise, Dead Rising 2 offers extra experience from zombies killed with combo weapons, but the difference between the normal 10 points and the combo 200 doesn’t add up all that fast when rescuing survivors gives you 12,000 points at minimum.  Plus, the combo weapons don’t last all that much longer than regular items.  While item degradation usually only forces me to muck up my Fallout inventory to carry dead weight, I must concede that I can see how bashing countless zombies with a golf club might cause some damage to the club, or how a gun that runs out of ammo might only weigh you down, but I draw the line at thinking that hacking through a few monsters with a sword would result in total disintegration of the steel. Considering that, when I found the broadsword, I stocked up because they understandably dealt more damage than pummeling someone with a power drill (no matter how many you attach to a bucket), and lasted just as long as any other weapon.

People? Can I guess people? Did you make people for dinner? Of course you did.

So that pretty much describes the game. You charge through the mall at breakneck speeds, hacking through crowds of zombies that never seem to get any smaller despite having no visible entrances or exits to the mall, rescuing survivors steadily over the course of three days. Most of these people, naturally, come out of nowhere (re: nonexistant entrances to the mall) and don’t seem to even notice the endless undead closing in around them. About a third of these people have snapped and will immediately try to kill you–apparently the game means to imply a higher density of psychopaths during zombie outbreaks.  These bosses take virtually no damage until Chuck reaches about level 20 or so. Or maybe I just hadn’t found the sword yet.  I don’t know.  One weird quirk offers you the chance to restart the entire game with all your experience and combo cards, and between the time limit and nearly impossible pyschopath fights, I got the impression that it wanted me to take this option. Let that indicate what level of quality to expect–lacking confidence that people will find value in replaying their game, Capcom tries to force them to replay it. 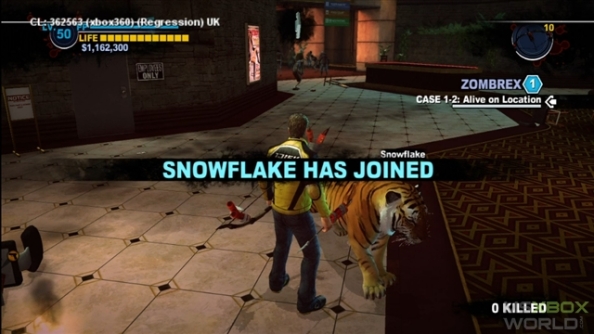 Yep. Somehow a tiger has lived in the mall for at least a day and no one has seen it. And if it doesn’t join you, you never see it again.

Setting the game in a mall seemed a little weird, and the group of rednecks who show up to bitch about socialism felt a bit hackneyed too. Congratulations, Capcom, you figured out themes that Romero used decades ago.  Care to make them any more relevant? Well, as soon as I wondered that I began to think–yes, these redneck, Tea Party, Ayn Rand fanboys might ironically feel threatened by the brainless masses, but rather than picking off the obvious symbol of left-wing extremism infesting the mall, they shoot survivors, indicating they have no clue how to identify socialism or how to properly solve their political problems. The plot twist clearly shifts the focus of evil from consumerism to corporate greed, and the mall itself replaces anchor stores with casinos, which considering modern fears of class warfare, getting rich versus going broke, and the pure chance involved behind any of that, Capcom may just know how to use zombies properly after all.

Given interpretive value, the literature teacher in me says this game actually needs to exist. The gamer in me wants to hack the game and remove the time limits and any babysitting components, and possibly to tone down two or three of the early psychopath battles, but otherwise, the game doesn’t suck.