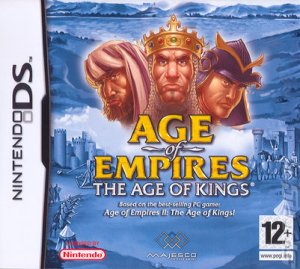 If you’ve kept up with me for even a few months, you’ve probably noticed a pattern. I play a game, like it, and jump immediately to another game in the series. Or, perhaps, I hate the game and want to play something better. Either way, you can expect another Onimusha entry soon. Maybe another Castlevania, too. But not this week. This week I’ll jump back into the past and re-create historical battles without the need to tolerate people who truly believe the South will rise again. You may recall a few weeks ago when I wrote about Age of Empires: Age of Kings. I felt that between juggling the tasks of deforestation, trading resources like a gambling addict at the New York Stock Exchange, whipping lazy peasants like a plantation overseer, and constantly buffing out the hoof dents in and removing arrows from the skulls of my soldiers, I didn’t feel like I had any time to enjoy the game.  So when I finished–yes, and I also read all the way through Moby Dick. I abuse myself that way–I did what I could to rectify my frustration; I played through the turn-based Age of Kings on the Nintendo DS.

Yes, “turn-based.” The words reviewers always spit out like an angry dilophosaurus, meant to imply something infantile, unrealistic and boring, while still gives them an opening for lavishing praises on Mario, which really does play as infantile, unrealistic and boring.  Reviewers use the term “turn-based” to justify abandoning a Final Fantasy game after playing for thirty minutes and not getting a Call-of-Duty-esque rush of testosterone and a story premise they can sum up into ten words or less. If you haven’t yet picked up on the tone here, I don’t necessarily think games where the enemy patiently waits for you to bash in their teeth before they do unto you actually suffer directly because of that feature. Consider this retribution for panning Assassin’s Creed; now I have to defend something no one else likes. For starters, people who play chess and go take turns, and we commonly believe that geniuses play those games. Now think back to some of the real-time games you’ve played. Kingdom Hearts–do you ever use any strategy other than mashing the X button and occasionally healing? How about Smash Brothers or other fighting games. Do you actually know how to pull off the special moves, or do you just hit buttons and hope to get lucky? 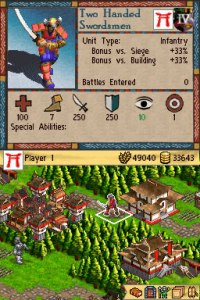 Yup. Grid-based strategy. Like chess, but with trees and rivers.

See, players will usually do the simplest, easiest thing that accomplishes their goals. Real-time games usually give you a swift, basic attack that you can execute in a pinch. Think about it this way; a spider falls on you while taking a shower. Do you rationally think out a plan to improve the situation, or do you freak the hell out? Real-time games make players freak out. I don’t like that. I constantly have to explain to friends that button-mashing never works better than actually knowing how to play the game, and they never believe me, and then they play as Gannondorf and I play as Jigglypuff and I beat them into submission within moments. The PC version of Age of Kings employed the freak-out strategy, where building a proper economy, scoping out the terrain and developing a strategy often took a back seat to giving a sword to any man, woman, child, horse or hedgehog within sight and pushing them out one at a time to get slaughtered by the hoards of enemy Rohirrim Riding into my village, smashing and hacking and destroying everything in their path. 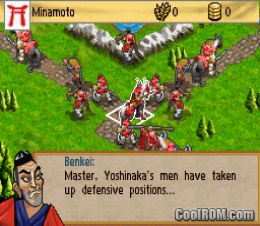 The DS game, however (to actually discuss today’s topic), gives you both the time to plan out a strategy and the need to do so. In addition to campaigns where you build towns and mine resources to support your army, this game gives you missions with a set number of non-renewable troops and tells you, “Go get ‘em, tiger!” And of course, attacking your enemy directly inevitably results in a wall of bodies–and not the useful kind, like in “300“–and a serious reflection as to your career choice of famous historical warlord. Different missions offer different objectives–destroy a town center, defeat an enemy hero, capture relics, build a tent for Genghis Kahn and make sure no one sets it on fire–and a number of ways to accomplish those tasks.

Hero units make the game. While in the PC version, you only ever took control of Joan of Arc, every mission in the DS game gives you control of a hero, and gives those heroes a number of special powers that effect game play. Joan of Arc can heal, Richard the Lionhearted can make his archers shoot farther, and Saladin will occasionally chip in a few coins to help you save up for that camel you’ve always wanted. Regular units, while only the monks and villagers have special commands, each have their own characteristics or abilities that tailor their uses to specific strategies. Archers can attack from a distance, preventing a counterattack, but if attacked at close range they have very low defense. Pikemen have less attack power than swordsmen, but deal more damage to cavalry. Cavalry deals a lot of damage to most things, but loses strength against buildings. This keeps the gameplay variable, and the bonuses and handicaps mostly feel intuitive, but sometimes come off a little weird. While I appreciate the challenges in ripping down a castle with your bare hands from the back of a camel, I find it difficult to understand how a rock hurled from a trebuchet can rip through that castle like tin foil, but an infantry unit can take the same blow and walk it off with only minor bleeding.

The game, of course, retains its titular feature, “Aging Up.” In campaigns that require economy building, your production lines turn out shabby, brand X fighters, and only by sinking money–and for some reason, food–into research each day can you expect to give them better weapons, stronger armor, or more efficient training. With enough research, a player can advance to the next “age,” beginning in the dark age, then progressing through the feudal, castle, and into the imperial age. With each new age, new buildings become available and new research opportunities along with them. In the feudal age, for example, you can build a blacksmith, which doesn’t create any units, but can improve weapons and armor for your existing soldiers. Likewise, by the time you reach the castle age, you can found–and underfund–your very own university, just like a real national governor. 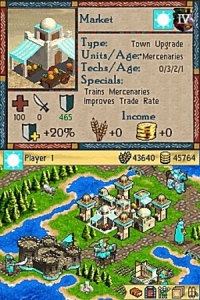 Age of Kings follows a historical path–sort of–for the five main heroes; Saladin, Minamoto Yoshitsune, Genghis Kahn, Joan of Arc, and Richard the Lionhearted. Occasionally it has to include a note here and there stating that Minamoto never actually fought the Mongols, that Richard never took Jerusalem, or that Joan of Arc didn’t really win all that many battles. I understand that not a lot of people out there nerd out over Medieval history, but I do, and as much as I appreciate science fiction and fantasy, game developers rarely realize that their products don’t have to fall into one of the two default categories. Unfortunately, it doesn’t include all that many historical re-creations, and the post-game falls short of expectations so hard I think I heard all its bones shatter. By accomplishing challenge goals in the main game, you can unlock extra maps and a few scenario battles to set up hypothetical and partially randomized campaigns to play through. However, all the heroes must have suffered a few too many blows to the head in the main game because even on the hardest settings, enemies often forget to build, research, age up, or attack. Not so much battles anymore, these campaigns have all the difficulty of erasing low-quality chalk off a chalkboard (you young ‘uns should think “dried up ink on a white board.” But then go find some chalk.) These additional campaigns serve only to wean me off the game while simultaneously looking toward Age of Empires: Mythologies, but in the interest of getting through this stack of games I bought by never played, you don’t have to worry for a while.