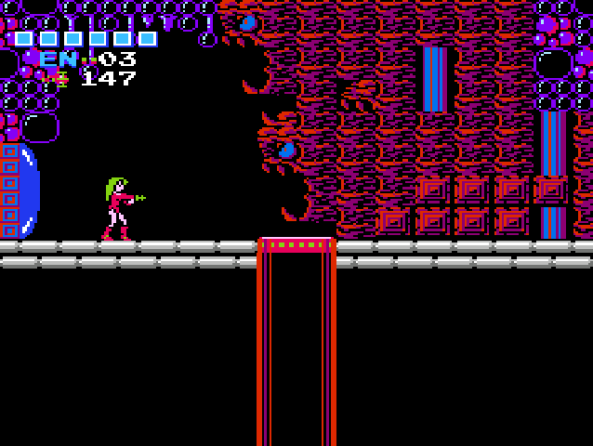 Riding an elevator down through the maw of a giant, two-headed demon. What could possibly go wrong?

In the past few days, I’ve finished three games and written about four of these entries. While I enjoy the prospect of getting ahead a few weeks on my posts, the ol’ well of humor might risk drying up. Or burning out. I don’t know. I do know, though, that while I enjoyed Metroid Prime 3, it left me with an aching feeling in my heart (which beats Custer’s Revenge, which left me with a burning sensation in my pee) that nothing quite compares to the old school 2-dimensional Metroid games. To my surprise, when I tallied them up to see which one drew the short straw and had to cleanse me of my first-person nausea, I realized that Nintendo has only made five: Metroid, Return of Samus, Super Metroid, and Zero Mission, which only really should count for half credit as it partially remakes the original. Why do we get so few of these classically styled games, but jumping plumbers have such a fan following that they’ve metastasized into multiple series? Someone contact the New Super Mario Bros. team and tell them what we really need. Still, I needed something to fill the void, and since I’ve already written about Zero Mission, Super Metroid and Return of Samus, I opted to go with the classic 8-bit original.

The story, as typical for games on the NES, has all the complexity Nintendo could detail on six whole pages of an 11.5×9 cm instruction manual. In the year 20X5–because apparently the fact that half the decade has passed matters more than which decade–all intelligent life in the Milky Way has come together into a peaceful federation rather than Earth setting up colonies and raping foreign planets for their resources like would probably happen in real life. However, to fill the void of assholes, a group of space pirates have hunted the wise Chozo bird race to extinction,  taken control of their planet, and used it as a base of operations to rob and loot and pillage from everyone else in the galaxy. You know…like the United States in real life.  Too inept to land a force of Federation Police on the planet, guns a-blazing, the government decides to outsource the job to a single bounty hunter who promises to do a better job for less money while simultaneously dealing with severe PTSD caused by the very space pirates she’ll have to face with no back-up or emotional support. A sort of space Mowgli (fitting with today’s neo-colonialism theme), Samus lived with the Chozo after space pirates killed her human family. 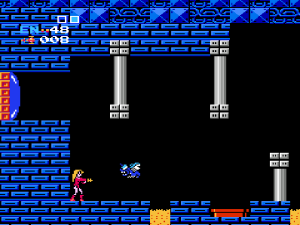 Prepare to spend some time killing bugs for energy.

To add to the list of reasons why not to send her in, you begin the game at 30% health.  The power suit she wears, which the instruction manual says makes her a cyborg…and also apparently a man…apparently serves more of a Darth Vader suit function. Anyone else starting a game at 30% health would fade into view during the opening fanfare in a full-body cast along with their IV drip. This feels like more of a scathing criticism of the Federation. Why even keep a standing law enforcement agency when a hyperglycemic cancer patient covered in third-degree burns offers a better chance at bringing criminals to justice? But yeah. Samus begins the game with 30 health out of a total of 99, and no matter how many energy tanks you collect, each time you die or continue a game via password, you’ll still begin on the brink of death with only 30 health. Farming energy proves difficult, as you get to choose between doing it safely and doing it quickly, and even the “quickly” option takes time, as the drop rate decreases the more you shoot monsters that continuously spawn out of pipes. So prepare yourself to spend long hours going back and forth, shooting monsters in hopes of seeing those flashing purple baubles worth more than gold. And don’t go in to fight bosses until you know you can take them.

…a lot of time killing bugs.

Beyond that, I think I should apologize for some unfair criticism of the game earlier. Previously, the lack of an in-game map challenged me to keep my blood pressure from rising in uncontrollable rage as I wandered through endless, identical passages trying to find something useful to do. This time, I decided to try it au naturale. I referred to a map briefly before I started, and realized that the later portions of the game had smaller segments of absolutely identical passageways, and while no less confusing, I could manage them far more easily than I had previously assumed.  So I memorized the initial path, from the morph ball to the missles, through the bombs, and eventually the ice beam. From there I only had to check the map once while looking for a well-hidden path through Norfair.

I’d like to go into McDonald’s and have a giant stone human hand me my fries.

Once free of initial map frustrations and the exciting and indefinite bouts of energy farming, the game plays a lot like the Legend of Zelda. Samus begins with a piddly array of attacks and range of motion. She hunts down items that increase her abilities. Items like the maru mari (morph ball) let her curl into a ball, allowing her to access corners of Zebes previously available only to the most intrepid of hedgehogs. The high jump boots, well…I shouldn’t have to explain what they do, but they let Samus leap to new heights, as well as making older heights less of a chore to reach. Weapon augments like the long beam allow her to one-up the actual side-scrolling Link, letting her shoot all the way across the screen! And bombs…well, enough with the Zelda comparisons. You get the point. 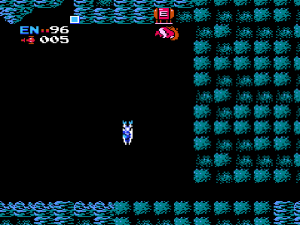 Most heros just kill their enemies. Samus humiliates them first.

These items show the major advantage that the 2-D Metroid games hold over their Prime counterparts; you can use them everywhere, and they might help you anywhere. Lately, Samus’ arsenal consists of items that interact with specific items in the environment, allowing her to open up new areas. Same basic idea, yes, but when an item doesn’t benefit her all around, it amounts to amassing a giant ring of the most eclectic keys the Nintendo designers could think up. Getting the plasma cannon early on in Metroid Prime 3 excited me, until I realized it didn’t actually power up my shots and could only either open red doors or melt patches of ice and scrap metal that obstructed my path. You know, like a door. In this game, the beams actually have a function; the ice beam lets you turn your enemies into stepping stones, and the wave beam broadens your shot, reducing the pesky need to aim at stuff. 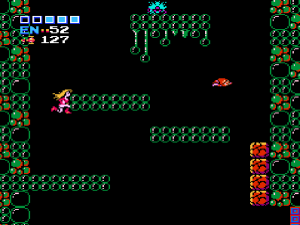 Ret-conning Samus’ hair color already! Mostly a brunette, it changes to blonde and sometimes green within the game.

Born in 1983, I owned an NES before I even heard of any other video game system. I have a certain fondness for the system and appreciate the games for personal reasons as well as for their famously superb design. So when I say Metroid surpasses most Nintendo classics, understand that I don’t say that to demean other games at all–it actually plays like a game far ahead of its time. You may have to deal with some obnoxious ret-conning from the storyline. The instruction manual introduces Samus both as a cyborg and a man–both ideas they don’t stick with even through the end of the game. Ridley, apparently, has a claim as the first life form on planet Zebes, which sounds kind of interesting, but the later games’ stories (as well as the Metroid Manga) come off as more compelling.

Completion bonus: After making your way through Mother Brain’s jar and successfully clearing the planet before it blows, the game places you back at the beginning, sans power suit (or with suit if you cleared the game without) and lets you play through again, this time beginning with the items of power–spin attack, high jump boots, varia suit, maru mari, bombs, and whichever beams you had before–allowing for a speed run attempt. While I usually only play through games once before writing about them, I ran through Metroid twice. Energy farming doesn’t take nearly as much time or effort with the spin attack, and a nice quick dash through the game felt like a nice reward–rather than a too-easy cheat mode–for the effort put into the first round.