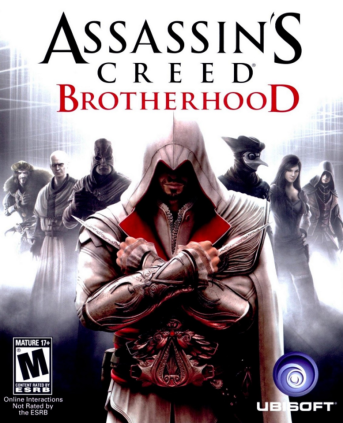 I didn’t care much for Assassin’s Creed II. Blasphemy, I know. I felt the developers had an interesting premise and concept to build a game around…and immediately burned it into a disc, slapped a label on it and charged $50 a pop. Apparently shooting for a sandbox game style, the bland tasks combined with the ad nauseum approach to…well, everything…made it a perfect game for ignoring in favor of chain-smoking episodes of Scrubs. And I watched every season. Even the last one about medical school; and if I found the rich med school tool character more engaging than murdering my way through 15th century Italy, you can imagine how little interest I had in playing Brotherhood. But I bought both games at the same time, so as long as I have no classes to teach and no real burning call to play anything else, I figured I might as well plow through it.

Naturally, the story opens up with Desmond Miles, still undergoing virtual reality training to fight Abstergo, a corporation we don’t really see which supposedly came from the Knights Templar crusaders who somehow connect with the Borgia in Ezio’s time period by virtue of developers wanting their stories to connect really bad, but not exactly giving a damn if they do it effectively. So the player learns that Templars equal Borgia equal Abstergo, and pretty much has to just understand that with no more evidence than the game telling us that once in the opening sequence. Still on the run from the last game, Desmond, his slightly less cross-eyed love interest Princess Anna, and their team of wacky, zany characters, drive into Monteriggioni where they set up the Animus machine and continue his training. At the end of the opening sequence, Desmond stands tall, crosses his arms triumphantly smiling, and declares proudly, “My name is Desmond Miles, and this is my story!”

At which point the game promptly switches to Ezio’s time period with absolutely no sense of irony or awareness either at how badly they misjudged their own story or how little Desmond actually matters. Fortunately, you only have to deal with the obnoxious sap for an extended sequence early on where you wander through a darkened, non-interactive environment trying to locate power boxes and one doubly obnoxious segment of seemingly endless platforming just before the closing credits. I did receive notification part way through that I could leave the animus at any time so Desmond could check his email. I did this once, finding two absurdly pointless messages in an inbox that had no bearing on the game in any way. Thank you, Assassin’s Creed, for you have designed a video game that successfully simulates the experience of playing a video game. 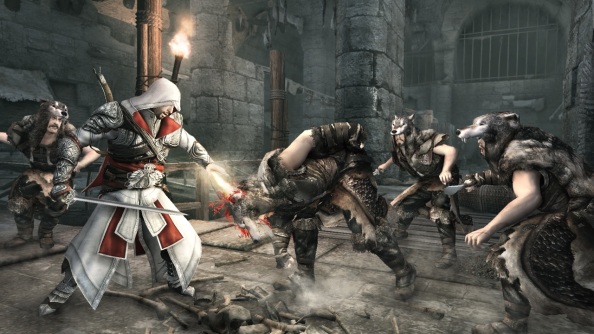 You pretty much have to get this close for accuracy in Renaissance firearms.

But very early on we get to leave the twenty first century and go back to Renaissance Italy. At this point, I started looking for differences; improvements they may have made from one game to the next. Brotherhood, however, appeared exactly the same as ACII. Even to the point where I had to ask, “Why does Ezio’s robe have the custom dye job I gave it in the last game? And how does he have the same inventory and cash supply?” I thought I might enjoy playing a game that built directly from the last game, allowing me to keep weapons, armor, cash, etc, and didn’t feel creeped out in the least that Brotherhood had NSA-ed its way through my hard drive to import my ACII configuration. However, after a side trip to his Villa, a surprise Borgia attack destroys his clothing, weapons and armor, forces him to leave behind his cash, and somehow makes him forget how to jump-grab ledges while climbing. (Yeah…that didn’t make too much sense)

New to the running and jumping, Ezio can swing 90 degrees, reaching new heights of “hold down X” gameplay.

On the plus side, the game didn’t force me to play through a tutorial stage where I had to wiggle my toes or race anyone up a building. I don’t know if they just didn’t include it or if I owe that to the ACII save file, but I liked the pacing. In no time at all, I found myself merrily romping through the rooftops of Rome, stabbing and murdering willy-nilly and care free, leaping off great heights into stacks of hay conveniently placed around town, on castle ramparts, inside the pope’s house, and later on at a 21st century construction site. From here, I did begin to notice differences between games. They streamlined the combat ever so slightly, so rather than clanging your sword against an enemy’s armor for five minutes at a time, you only have to wail on him for about four and a half. Later I discovered the kick feature, which immediately dropped their guard, which I liked, but still didn’t find half as useful as walking up to people and stabbing them without a fight. Missions feel less like playing tag with a map icon. One of the big parts of Brotherhood involves liberating areas of Rome from Borgia control. This involves sneaking into a heavily fortified area, killing a captain, then climbing a tower and setting it on fire. Yes, you have to do this about a dozen times and they don’t really vary the mission formula that much, but enough can happen to make them feel like different jobs that require different tactics and responses that I didn’t mind the repetition.

Son, one day all the light touches will be yours…providing you invest public funds into infrastructure.

Once you’ve liberated an area, you can put money into renovating shops in that district. Much like the Monteriggioni renovations in ACII, this opens up new options for Ezio as well as increasing Rome’s income, which despite Borgia’s influence, apparently gets deposited directly into an account for Ezio. But he seems to understand how to spend tax money better than the Borgia, so I’ll forgive Rome this indiscretion. Not that Ezio could really skim off the top, though. While cash doesn’t flow like booze at a strip club anymore, you can’t buy a whole lot of useful things. Shops have an even more limited supply than before (excepting “shop quests,” which open up new items and of which I managed to complete a grand total of one), so a handful of renovations and a little patience could get you all the cash you need rather early on. At that point, you can only use income for further renovations, which usually serve little practical purpose other than to increase income. But screw all that: I bought the Coliseum. Why? So I could say I owned the Coliseum. Still, it seems a redundant system of busywork, and I still don’t quite understand how setting up a neighborhood thieves’ guild manages to increase the city’s value.

Ezio communicates with his lackeys by giving information to a little bird to tell them.

Also on the redundant side, Ezio can recruit assassins for his cause. Once you rescue citizens from Borgia guards, they’ll join you and you can send them across Europe on missions to earn a few florins and experience points toward–you guessed it–sending them on bigger and better missions. You can call them to bail you out of tight situations, which makes certain battles significantly less daunting, but still, both AC games I’ve played seem to lack motivation; the player has stuff to do, but no apparent bonus in stats, inventory, or even storyline to gain by doing them. You just do the quests because the game gave them to you.

Leonardo invented everything else. Why not a tank, too?

The real joy in Brotherhood comes from Leonardo da Vinci. Forced to make war machines for the Borgia, he hires Ezio to destroy his creations to ease his conscience. These missions always involve a segment where Ezio climbs into the war machine and uses it to destroy others; providing the only variable style of game play, even if a few of the machines feel clunky and tedious.

Overall, I didn’t hate this game. The characters looked better, still cross-eyed, but less so. The tasks repetitive, but slightly more interesting. If I expressed my feelings numerically, ACII may have ranked a negative 1, while Brotherhood hovers around a positive 0.5. Maybe I’ll consider finishing Ezio’s trilogy or playing the pirate version. But don’t hold your breath.