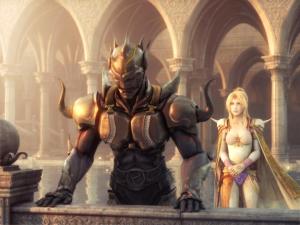 A beatifully animated, fully-rendered 3D opening sequence, the style of which you never see again. Why does Rosa look like she has swine flu?

I you will permit me, I’d like to start on a serious note, preferably without discourse as to whether or not my usual candor qualifies as humorous. I just finished Final Fantasy IV, something I claim to have done no more than twenty or thirty times in the past, and suddenly I can put my finger on why I appreciate Japanese storytelling more than Western writing. That whole dichotomy between good and evil and the struggle there between, falls a little flat, and as people have a pesky habit of applying fiction to moral decisions (for which I recommend reading Kurt Vonnegut or Charles Dickens) rather than, you know, just treating people well, such a dichotomy tends to screw up society. 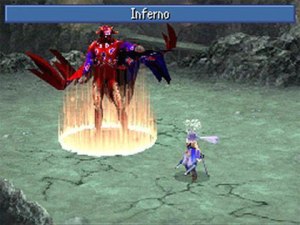 How so? Start with Beowulf. The draugr Grendel came from the lineage of Cain. And if that doesn’t earn him his own private hell, he also killed people and ate them. Then Beowulf shows up and slays him to punish evil. Excellent, right? Well, let’s take a jaunt over to this week’s game and look at Kain, who came from a noble lineage of dragoons. Golbez manipulates him into committing evil acts on his behalf. Then Cecil shows up, decides not to kill him, and you get a wonderful exception to normal RPG party limits that lets you fight with a fifth member. Now skip on over to Star Wars where we find Darth Vader, the Father of all Incarnations of Pure Evil. Except George Lucas wanted to show him redeem himself at the end, atone for his crimes and bring balance to the Force. But no one took it that way and we all talk about Vader as a badass so evil that he makes Satan sith his pants in terror; this pisses off Lucas, so he makes us sit through a crappy prequel trilogy to show us how badly we misunderstood this character. Then in Final Fantasy, Golbez pulls the classic Vader twist, Cecil struggles with the news, but eventually forgives Golbez, who goes on to clear out the first form of the big bad Zemus for you, then goes into self-imposed exile out of remorse. And this trend runs throughout Asian religion and literature from Journey to the West to Dragonball; no one possesses absolute good or evil, and everyone can atone. Full disclosure: Cecil’s atonement on Mt. Ordeals *always* gives me chills, and I’ve played the game forty or fifty times. 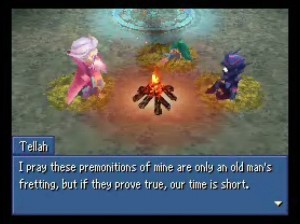 Despite everyone’s praise for FFVII, this installment changed the world of electronic RPGs more than anything else, having introduced novel ideas such as actually giving a character a personality and a conflict to resolve, and introducing thematic congruity throughout the story. Also, having a story. And dear god, music so good that Japanese schools instituted it as mandatory curriculum. I might even confess that I played the FF Main Theme, which played during Rosa and Cecil’s wedding, as the opening to my own wedding. While I have a special relationship with FFVI as the first RPG I ever played (and played and played…), I find myself playing FFIV about once per year, and only in part because they port and remake the game with a regularity that anyone over the age of 70 would envy. (Seriously…FFIV (Japan), FFII (USA), FFIV Easy Type, FF Chronicles, FFIV for the Wonderswan, the GBA, a few systems I probably missed, and then this version.) So when I found out that the game would receive such a drastic makeover as they gave FFIII, building it up in three dimensions with voice-acted cut scenes, I actually played the game in Japanese because I didn’t want to wait for the North American release (and thankfully, I lived in Korea at the time). Also I intend to argue that that qualifies me as bilingual and that I don’t have to pass a language proficiency test ever again. 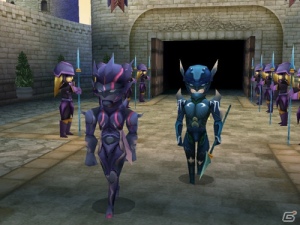 A more appropriate representation of in-game cut scenes, the character design obviously symbolises that neither Cecil nor Kain can see the path before them. Because of their helmets.

So other than the aesthetic makeover, why should I waste my time on yet another release of a game I’ve already played sixty or seventy times? Square decided that simply milking it for cash wouldn’t cut it in the long run, so they added some chocolate to that milk. Many enemies have different attack patterns, and certain attacks and spells function differently; for example, if you expect simply to bounce Bahamut’s megaflare back at him, you’ll soon discover the reflect spell has all the defensive capabilities of a burlap sack soaked in gasoline. These changes tailor the game to develop strategies, without which you will pass through the game with the ease of a golf-ball sized kidney stone. To help ease said passing, characters now can augment their abilities using items mostly looted from the corpses of their dead friends. As the name suggests, these augments will give characters extra commands to use in battle or enhance their qualities akin to the relics in FFVI. Unfortunately, the game explains this system with all the clarity of Sylvester Stallone explaining quantum physics while running a garbage disposal at 6:00 in the morning. It fails to tell anyone who’s played the game before that you won’t waste your augments by giving them to characters who won’t stay in your party. Instead, it’ll let you loot even more powerful abilities from them. Thanks, game. I could have used that information during the early game when I usually drudge through the road from Damcyan to Fabul, ruing Squaresoft for giving me a bard and wondering why anyone in their right mind would ever choose to play as a bard.

And while discussing the merits–or lack thereof–of things no one ever uses, they’ve added an entire garage sale full of assorted junk to the roster of items. You know those too-pointless-to-use magic items that Square seems to love handing out? The ones that cast low-level spells at a fraction of the stats that their black mage counterparts have available? And you usually get them when you’ve had their upgraded version in your regular magic menu for hours? Yeah, the game chucks them at you like a Double Dare physical challenge. And they’ve added a mapping feature to make use of the dual screens–any time you complete drawing a map of a dungeon floor, you get an item. Or five or ten. I’ve found uses for some of them; they’ve added items that permanently upgrade HP or MP, while helped keep Rydia and Rosa alive and not useless in battle. But usually you’ll get an antarctic wind or a bomb core or–my personal favorite–items that cast status spells that never work anyway. You no longer have to replenish arrows–each one gives you an infinite set, which takes a bit of the fear out of using Rosa, lest she run out of anything useful to do and end up tossing pebbles, but now Cecil can’t equip bows, making him all but a burden in the Lodestone Cavern. 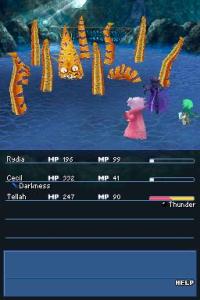 Unfortunately, for all the clever re-figuring that they did when assembling the DS version, even with augments and strategies and piles of crap looted from caves, eventually (and often) you will run into an enemy–not even necessarily bosses–that hits your entire party for more damage than you can take in a single blow, or that spams an attack faster than you can keep up with it, and you only have the option of leveling up in order to resist. Having played the game once before, I knew this and kept a steady pace of leveling up through the game. I did all right in most places, but the final dungeon clearly took offense at my presumption that I could fight through basic battles at a paltry level 65. So thank you, Square-Enix, for taking one of my favorite games of all time and adding just the right dose of tedium to turn it into a fucking level grinder. 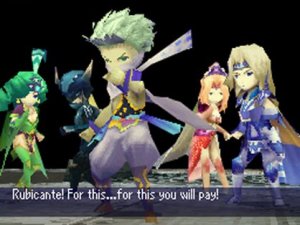 I can only really recommend this game for the die-hard FFIV fans who have played the other versions eighty or ninety times, like me. I liked it. Mostly. The voice acting impressed me when I heard it in Japanese, and it only got better when I listened to it in English and actually understood it. Also, I appreciate the recognition that people still want to play certain games even twenty years after their first release. But it requires a certain level of patience and know-how to both grind and solve strategic puzzles (the only kind that actually belong in non-puzzle based video games!), and it might turn off first-time players (as well as some second-, third-, and tenth-time players). Still, the dramatic points in the game still awe me after a hundred times through the game, and finishing the game rewarded me with the realization that Yang, our blonde-mustachioed Asian Fabio, can attend a wedding bare-chested without the slightest sense of impropriety.