You hated him as an adult; now loath him as a child! At least this game also implies that he dies.

When you walk away
You don’t hear me say
Please, oh baby, don’t go!
Simple and clean is the way that you’re making me feel tonight.
It’s hard to let it go.

Sounds sexy. This music opens up the Disney-Square-Enix joint production, Kingdom Hearts, and when the dark tones start playing, you know that only a sleek, sexy story could follow. If these lyrics mean anything, you’ll never encounter any teeny-bopper heroes, cutsey cartoon characters, or teen idol singers signed under the Disney label. But seriously; have you ever listened to the lyrics to “Simple and Clean”? No one could have written them but the Langston Hughes of blathering nonsense.

Anyway, the story behind the game goes that after Square lost about fifty million dollars on “The Spirits Within,” a movie whose failure any Final Fantasy player could have predicted on account of it resembling a Final Fantasy game as much as the World Wrestling Federation resembles the book of Deuteronomy, they risked going under and had to sell the rights to many of their most famous characters, such as Cloud, Squall, chocobos and moogles, to the only organization that could afford them: Disney.  Suddenly owning all these video game characters, Disney puzzled over what to do with them, and finally decided, “Let’s make a video game?” Then they had to find someone with the expertise to make an epic game using Final Fantasy–and Disney–characters, leading them straight back to Square.

Played by a Billy Zane pissed off that they cut him from Back to the Future III.

This story never really happened. But still, the concept of a game where the main character travels through a universe full of worlds populated with a bizarre potpourri of animation contains a brilliance and innovation only matched by its convoluted, mind-numbing confusion. The story opens with Sora and his two friends, Riku and Kairi. They live on an island that gets devoured by cutesy black monsters called heartless. They somehow tumble through outer space to land on separate worlds. Sora discovers his destiny to wield the “Keyblade,” a stunning swing-and-miss attempt by Disney to reduce the image of violence in games while still letting the protagonist use a sword, and Disney’s own Donald and Goofy task him with traveling from world to world, using the keyblade (more of a key-club, really.) to lock each one away from the heartless who want to devour those worlds too. And on the way, Sora looks for Riku and Kairi.

Anyone who has ever visited one of their theme parks (Tokyo Disneyland, 2008!) will immediately realize that Disney has always liked to think of their characters as coexisting in the same universe, so while the story feels a bit like a flimsy excuse to parade cameos in front of our noses the way my grocery store tries to entice me into buying their day-old pastries by stacking them up on tables by the front entrance, Disney does that. They buy into all their talk of “magic,” and they don’t view Peter Pan or Maleficent as any less fresh than Elsa or Simba or the princess from that kinda racist movie set on the bayou. Rather than look at it that way, I considered this game like one of those “re-envisioning such-and-such as an anime” videos you find on youtube. (Look up the one for Miyazaki films)

Most of the gameplay occurs in a hack-and-slash RPG style in which Sora mercilessly gives the heartless (and occasional Disney villain) concussions, contusions, and other forms of blunt trauma with his “blade.” Sora can learn skills, techniques and magic like in a Final Fantasy game, but the fast-paced active combat style doesn’t fit well with the menu system, which demands simultaneous use of the left analog stick and d-pad, and disables any useful right-handed action while scrolling through. I guess since I get through battles all right, I can chalk this up as adding challenge, but I don’t really admire heroes with narcolepsy, who slip into brief comas in the middle of battle. As a result, while Sora can perform neat attacks and spells, I almost only ever use the basic attack and the three spells you can add to a quick-cast menu.

Genie fighting monsters in a psychadelic whale bowel. Because it makes sense.

While traveling between worlds, the game becomes an over-the-shoulder perspective space shooter. This accomplishes very little except padding out the game for time and adding useless junk to find in each world.  These segments mostly consist of holding the X button for a steady stream of lasers and wiggling the analog stick ever so slightly to prevent impaling your ship on objects that will do as little damage as possible, then let you pass right through them. After finishing the first three worlds, you get a warp drive that lets you bypass this part, making it even less relevant to the game. You have the option of making custom ships by collecting blueprints, finding gummi blocks, and putting together or customizing existing models. However, the default ship provides as much challenge as deer hunting via carpet bombing with napalm, and at that point upgrading to an atom bomb really won’t cause any noticeable difference. Plus, I’ve conducted Korean-language ATM transactions more easily than using the gummi ship building interface, an extra-convoluted program that rival Adobe products for being non-intuitive.  While the player can mostly ignore these gummi-Galaga sections, it does intrude on the main quest by making gummi blocks the most common prize in hard-to-reach treasure chests. So when you finally have the proper skills and abilities, backtrack to old worlds, and get the platform-leaping aspects (honestly, why does anyone still make platformers?) right, the game rewards all your time and effort with an item as relevant as a Playboy magazine at a strip club. 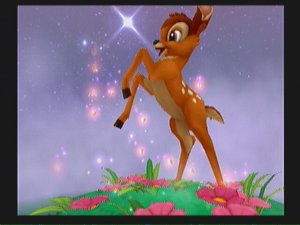 Do I get the adult, powerful, many-antlered Bambi? Nope. I summon a baby deer to aid me in battle.

I don’t want to mislead you into avoiding this game. It does have good qualities to outweigh the bad. You get to fly in Neverland and you turn into a mermaid…er, mer–Sora and swim through Atlantica. You can summon Mushu, the Genie and…for some reason, Bambi (and not the adult, mega-antlered, fearsome Bambi. The young, little Bambi).  I did enjoy the half-dozen Disney heroes as playable characters, especially the Beast, and major Disney villains like Jafar, Ursula, Maleficent and Hades carry a certain amount of weight.  Since playing a Disney character binds you to them for life, most original actors reprise their roles; however, one absence stands out, and without Robin Willaims’ manic ad-libbing, I feel a little awkward every time the Genie tries to crack a joke, even Sora tries not to make eye contact until the moment passes. Then act three arrives and Square says, “Fuck this Disney shit,” the plot turns dark, and the rest of the game riffs on themes of darkness, despair, and nihilism. 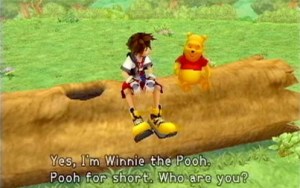 Oh, and don’t forget the absolute necessity for any action-adventure RPG where a heroic warrior fights his way through demons to conquor encroaching oblivion; Winnie the Pooh. No really, didn’t Aragorn have to defend Minas Tirith’s carrot gardens from bouncing orcs? I think Luke Skywalker’s biggest test on Dagobah required him to free Yoda’s head from a honey jar.  Okay, so the Hundred Acre Woods level doesn’t fit, and I can’t quite envision Pooh as belonging in an epic fantasy story. Sora doesn’t fight any heartless; instead he just plays the lamest mini-games since blitzball. 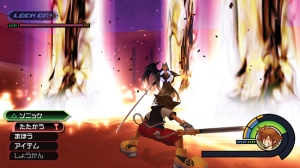 Played by Lance Bass. Because when I think “Sephiroth,” I think soft pop music for pre-teen girls.

On a final note, Kingdom hearts has some amazing optional bosses. I believe during my review of Final Fantasy VII, I described Sephiroth using the phrase “anemic guinea pig.” Well, this game finally does him some justice. To all those people on forums claiming Sephiroth’s difficulty compares to the final boss, well, no. Final boss fights need to display flashy effects and epic, cinematic moments. The final boss tells a story, but has to let the player through relatively easily. No one needs to fight Sephiroth. So by removing any and all requirements (seriously, you get nothing for beating him except bragging rights), Square finally made him hard as all fuck to beat. Oh, and they cast ‘N Sync’s Lance Bass to voice him. So I guess the anemic guinea pig still fits.