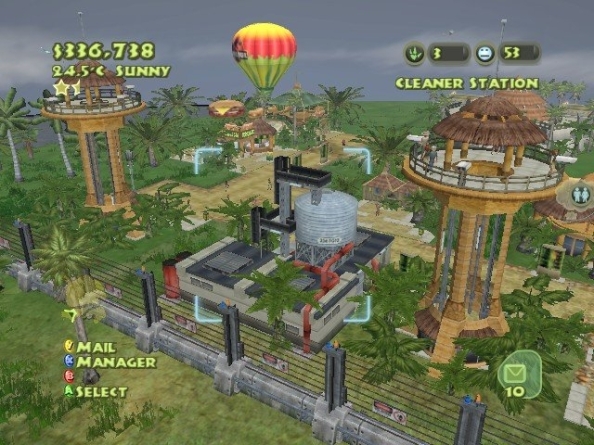 If you follow my blog regularly, rather than flip through in disappointment after your search for “sex” and “video game” turns up nothing but a wall of text with a few irreverently captioned images, you’ve probably found more than one review complaining about game series that sold out by porting a downgraded version of their original to a same-generation console just to make a few bucks (or a few thousand yen). While I do love to put on my big, black sanctimonious robes and pound my gavel in condemnation for these cash-grab attempts, I would disgrace the dignity and sex appeal of my big, curly powdered wig if I didn’t admit I can’t really make a general rule out of that practice. Fortunately, another sell-out genre of video game lets me keep up the pretence of blanket hatred on a much more regular basis: movie-based games. 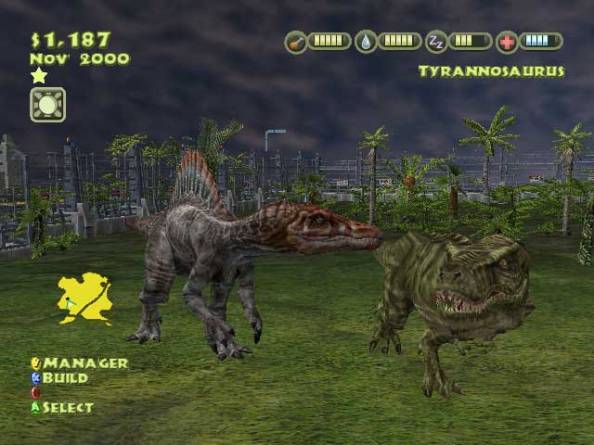 Because Spielberg thought people would prefer an obscure species of predator to the historical favorite for the third film. Yeah. Smart move there.

I loved Jurassic Park. It came out the summer before fifth grade, and I never remember a movie scaring me more than that.  Give me a chair moving very slightly in a ghost story and I’ll pucker my naval in boredom. On the other hand, give the shark from Jaws a pair of lungs, legs, the intelligence to open doors, and a plausible-sounding explanation of how scientists might make them a reality, and I’ll lie awake at night, terrified, unable to sleep until eighth grade. Granted, some of that stemmed from the fear that the sun would go supernova and incinerate me in my sleep, but still…raptors! So you can imagine that after years of games like the weird top-down/first-person SNES adaptation or the Sega version where you play as a raptor, when I found a copy of Jurassic Park: Operation Genesis for $3 at my local Savers, I reacted with an emphatic WTF (and not just because I found out later that the game sells for upwards of $80 on ebay). 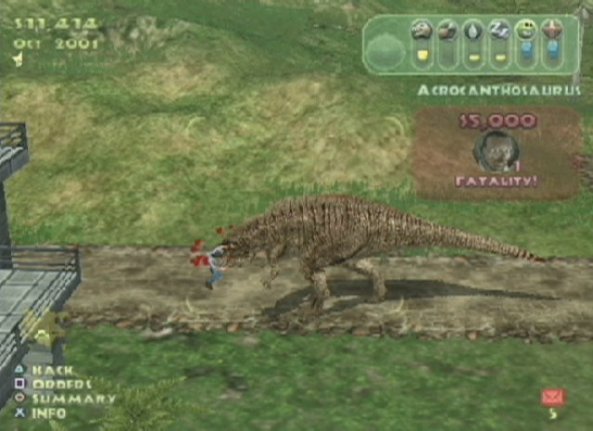 As the game simulates an alternative reality where John Hammond succedes, capitalism seeps into every aspect of the game, including visitor deaths.

Operation Genesis shows an odd sense of self-awareness, showing the main characters from the film selling out their principles to make piles of cash.  John Hammond apparently has made a full recovery from his lesson in human endangerment for the sake of capitalism (or if we follow the book’s plot, his death by compies) and puts himself to the task of opening another park and profiting off tourists, despite the occasional fatality. Rather than advising about ethical ramifications of cloning a long-extinct ecosystem, Dr. Grant now digs fossils for the explicit purpose of extracting DNA for use by the park (however, the fact that they manage to obtain DNA from solid rock, which has completely replaced any organic material, causes me to question the validity of the cloned animals).  Dr. Sattler has apparently renounced her paleobotanist ways and now works as a nurse for sick dinosaurs.  And John Arnold, no longer holding a grudge against the dinosaurs that dismembered and devoured him, returns as the park’s operations manager.

Gameplay resembles sim games, with construction mechanics similar to Sim City, but with tourists walking through the park, apparently completely incapable of finding things like restrooms, restaurants, and the dinosaurs standing right on the other side of viewing enclosures. Oh yeah, and the game also includes dinosaur cloning.  Although the game drops you right onto the island with no instructions after a paltry five-minute loading time, if you’ve ever played a sim game in your life, it doesn’t take too much effort to pick up the tasks. The park needs an entrance, fences, and at least one dinosaur before you can open, at which point park admissions becomes your primary source of revenue, along with charges for viewing, eating, and for the serious dick players, using the bathrooms. Restaurants, cleaning stations, ranger stations, and other buildings help tourists leave to spread the word about how satisfied they felt after wandering, eating, peeing, and not getting gored to death in your park, raising your rating and by extension, your potential to profit.

Most of the amenities and attractions require research before you can build them because apparently your staff simply can’t grasp how a gift shop might work without someone writing a dissertation on the subject first. I know why they include this mechanic in the game–it lets the player prioritize, adding variety to each play through, and insuring that the park could, theoretically, fail. It also adds some credibility to the scientific aspects of the game.  I just fail to see how developing a vaccine for previously unknown diseases that will work on species whose biology we’ve only ever known through rocks shaped like their bones takes the same amount of time to figure out as how to drive a jeep through a field of duck-billed hadrosaurs.

They call this building the hatchery. I think it looks suspiciously like a raptor pen.

The process of cloning dinosaurs from DNA adds a layer of complexity to the game, requiring just about every step actually involved in real-life cloning except for the applications and approval from ethics boards. You start by digging fossils from a randomly selected dig site which, props for authenticity, coincides with real-life locations where each dinosaur species lived. You can purchase extra dig teams to make the excavation faster, but each team costs twice as much as the one before it and the process still feels like it takes sixty-five million years to get anything you can use. Also, sometimes they’ll dig up gold, silver, or opals, which have no use, but you can sell them. I usually use the money on store-bought fossils. You know why? Because I’d rather have fossils than gold, silver, or opals.  Once you have fossils, you have to extract DNA from them. Each sample gives you a small portion of DNA for a single species. You need 55% or more to clone a dinosaur. Yeah. It takes a while. And at 55%, they die off rather quickly. I like to imagine mixed characteristics of dinosaurs and frogs. Slimy, amphibious raptors hopping around their pens, or T-rexes trying to catch flies with their tongues. Anyway, once you have enough, and pay a hefty fee, your dinosaur hatchery (which you need to build) will start incubating and raising your park’s attractions: one animal at a time. 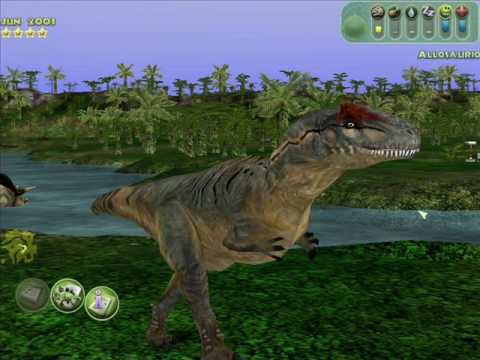 Allosaurus, a member of the Tyrannosaur family, struts for the camera. See, even T-Rex has relatives that embarass him at Thanksgiving.

While at thirty years old, I still love the idea of dinosaur cloning and hope for the possibility to visit a real Jurassic Park one day, I don’t really know if the main focus of the game should force players to watch the research in real-time. While you start with enough material to produce at least one dinosaur species, it can take years of in-game time to get a second. Each dig site has only three species, and the fossils put up for sale only match the species of fossils you’ve found. Furthermore, out of the nine sites available, you can only access three per save file, so you can’t actually get all the dinosaurs in the game for your park. The game moves at the speed of fish climbing out of the ocean, but it only takes four or five hours of gameplay before you realize that, even though the game itself has other options, it won’t let you do anything to make your establishment more awesome.

Theoretically, disasters can add some panic into the game. Apparently tropical storms and disgruntled employees shutting off the power don’t quite match up with the excitement of the occasional twister (what, did you just copy and paste the coding from Sim City?), which can either add mild amusement in the need to follow along behind it immediately repairing fences, or it can game over you if it happens too early on.  Dinosaur rampages–supposedly–cause more trouble, but I’ve never had an animal break out of its fence, even when I had the T-rex in minimum security pens. 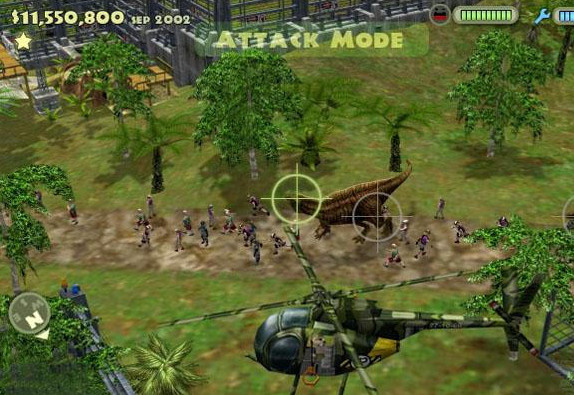 Nausea mode: where the camera jiggles, and the vomiting player simulates shooting dinosaurs on the ground below.

The game also offers a mission mode, with some alternative gameplay. The first mission asked me to drive a jeep around an island, photographing various species to prove to investors that the park really did clone dinosaurs–or knows how to use Photoshop. The second mission put me in a helicopter, gunning down rampaging carnivores.  The game lost me on that one–for a vehicle designed with the ability to hover, it handled like a gift shop balloon in a strong breeze.  Again, if they intended to nauseate their players, mission accomplished, but I just couldn’t live up to the task of operating a helicopter, machine gun, and vomit bucket at the same time. The reward for completing ten missions  lets you release all your dinosaurs onto an island without disease or people and just watch. No thank you.

You know what I’d rather do? Go read the damn book.