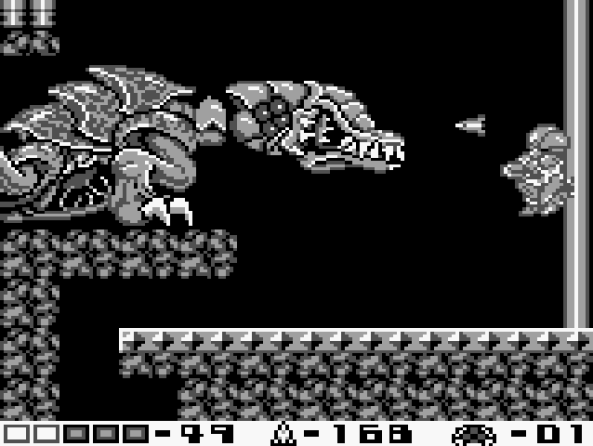 After the events of the original Metroid, the Galactic Federation decided the Space Pirates had gone too far! Perhaps they damaged relations by attacking galaxy cargo and transport ships.  They may have even ruffled a few feathers in wiping out the entire race of Chozo.  The galaxy may have thought about issuing a stern warning when they killed off Samus’ family. But damn it! Now they’ve gone too far. The Federation had no alternative but to…eliminate the entire species of metroids. I can see the activists lining up now–signs that read “Metroids don’t kill people: Space Pirates kill people!” Bribery and lobbying from “Big Metroid” must not have measured up against the prices offered by the Space Pirates. I may come off as cynical, but I can’t help but think that any government who would consider apprehending and prosecuting known criminals as a less-favorable alternative to wiping out the apex predator of an entire planet’s ecosystem must suffer from a fair amount of corruption.

Beats hunting them by their droppings

The idea of writing about a Metroid game has me bashing my head against the same wall I bash against for Mega Man. What can I really say that doesn’t already apply to all the other games in the series? Samus rolls up like a hedgehog.  Samus finds items like Link and jumps around like Mario. Samus fights monsters. Freeze the metroids, then blast them with missiles. Metroid really doesn’t innovate too much. While the original frustrates me on account of having no map and exceedingly large rooms that all somehow look identical to each other, and Prime annoyed me on account of Samus’ power suit not including the feature to see your feet as you leap from rocky precipice to rocky precipice (I hear that feature cost extra, and she preferred to go with the cup holders), I really can’t point out any significant difference in quality from one game to another. 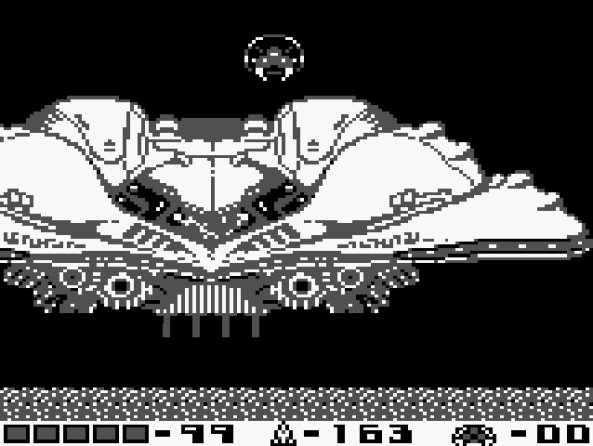 Well, they hired me to kill you, but…just this once.

As other games in the series tend to roughly follow the plot of the Alien movies, Metroid II: Return of Samus calls upon a character to invade a planet and wipe out an entire species, a request by a group of people collectively too dumb to read a job description. As a bounty hunter, I imagine Samus’ passion and skills fall in the area of tracking space criminals who have skipped out on their space court dates, receiving their space bail money as payment for her services. Or by a more archaic definition, capturing runaway space slaves who have liberated themselves from oppressive space plantations where their space masters whip them if they don’t grow enough space tobacco or pick enough space cotton. Apparently, though, that profession only lies one step away from “Orkin Man,” as the galaxy seems to have contracted her as an exterminator. So tired from her last mission and grumbling about the nature of this one, Samus lands her ship on the dark side of SR-388 with an inaccurate list of metroids to kill.

Remember: they mostly come out at night. Mostly. 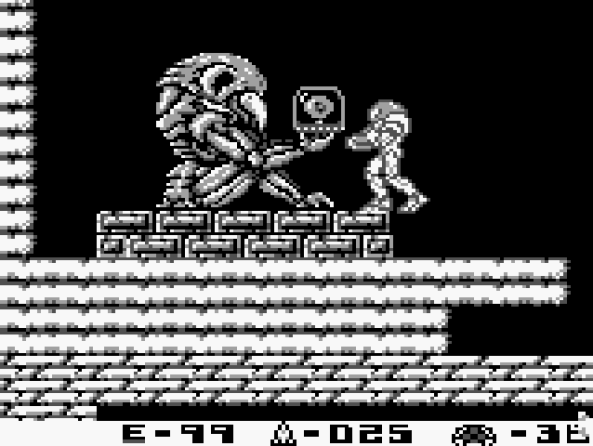 How did these guys get everywhere in the galaxy? Bad tourist policies? “Take only photographs. Leave only chozo statues.”

While I don’t usually consider graphics vital for a good game experience, Metroid II makes them significant. On the tiny, dimly-lit game boy screen, the lack of color offsets the background design, meaning that I spent as much time wandering around SR-388 looking for a gas station to ask directions as I did in the original game.   Unlike Mega Man II, the Samus’ size-to-screen ration doesn’t leave her burrowing through the map like a ferret, leaving plenty of room for her to roll, space jump, or bounce like a rubber ball.  In fact, quite the opposite; sometimes the game encourages hefty upward climbs with nary a ledge to stand on, requiring long chains of space jumping.  Unfortunately since the controls demand the clockwork input of a hungry toddler, one slip-up can send Samus plummeting back to the start.  Sometimes the spider ball tool helps out, but sitting too close to a bomb, getting hit by a monster, or just nudging the wrong button at the wrong moment can likewise invalidate your efforts. Item management has taken a downgrade from the original, as beam weapons no longer stack effects, and with no menu system (as in Super Metroid), if you want to switch between weapons, you have to backtrack to the last place you found that particular item. Because the Game Boy only had four buttons and a D-pad to work with, some of the ways to activate tools come off as clunky and random as the tools themselves. The spider ball commits this offense more than anything, and it doesn’t help that in spider-ball form, Samus moves more like a lazy tarantula when I’d prefer her to move like the spiders I nearly step on in my bathtub, yet like bathtub spiders she seems to have no qualms about randomly dropping from the ceiling. 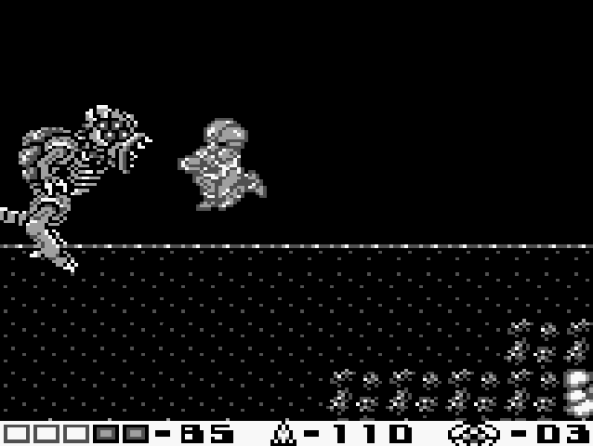 So if we watch them hatch and view them through every stage of their life…when do they turn into the jellyfish things?

I mostly maintain a Mega Man-esque appreciation for Metroid; the original concept worked, more or less, and as long as the game doesn’t tweak that too much, I can enjoy running and rolling through 2-D subterranean tunnels, murdering local wildlife and opening doors with a gun. If I needed to raise serious complaints about the game, I’d have to express a mild frustration that they’ve traded off challenging, unique boss fights like Ridley and Kraid, for simple, straightforward metroid battles, and while they included a lot of them, it takes less firepower to kill each one than a Northern Michigan mosquito–about five missiles. 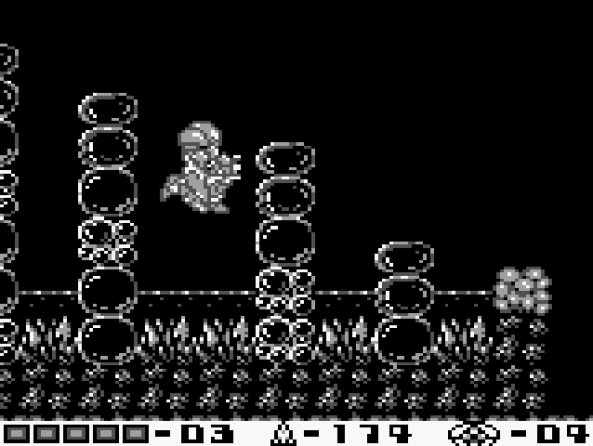 While not nearly off-the-wall enough to merit inclusion in my WTF category, the Metroid II map deserves honorable mention.  The original map infuriated me to no end, but at least they programmed it all on a single grid. So if you traveled in a circle, they at least had the decency to drop you back to where you started. Not so in Metroid II, as entire regions overlap–imagine finding that gas station I mentioned before, only to find that the cashier gives directions entirely in Shakespearean sonnets. It might get you from place to place, but you can’t help but wonder if a more direct approach would have worked better.

Still, fans of the series should invest some time into this game. You won’t miss any story if you don’t, since Nintendo still included the plot entirely in the instruction book and they give you all of it in the opening of Super Metroid, but you’ll at least get another subterranean gauntlet to run around, fight monsters and….wait, what? You don’t get to open doors with a gun? Well, forget it then.