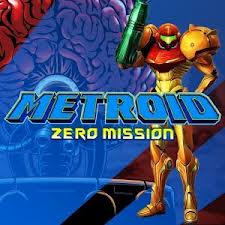 As I’ve written before, I like Samus Aran.  She managed to break through gender assumptions after a programmer casually mentioned, “Hey, what if the person in the suit was a chick?” and everyone at Nintendo just went with it.  Unfortunately, every subsequent game turns her into some sort of space-floozy who rewards you with a striptease based on how fast you finish, and the animation in Metroid: Zero Mission makes her vaguely reminiscent of a Barbie doll, but hey, it takes a real woman of the 1980s to pull off shoulder pads the way she does.

The fact that the original game came out in 1986 does actually reflect on Samus as a character during Zero Mission.  She explains the game’s premise in the opening sequence: “Now I shall finally tell the tale of my first battle [on planet Zebes]…my so-called Zero Mission.”  Great! We’d love a remake of the original! Except that the 2004 “enhanced” remake actually plays like someone’s mom trying to tell a story about what happened nearly 20 years ago, and not getting it quite right. 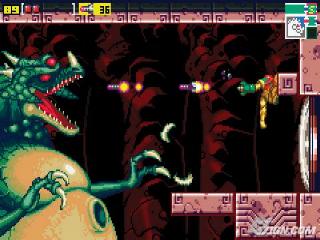 I once caught a lizard THIIIIIIS big!

“No mom, you didn’t get the speed booster until Super Metroid…sorry, I don’t remember you being stalked by a giant centipede….I swear Kraid gets bigger every time you tell the story.”  Furthermore, the bonus level tacked on to the end of the game, during which she loses her power suit, sounds like an aging beauty queen trying to remind the young folk how hot she used to be. 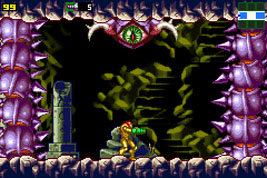 This guy would appear occasionally, take a few missiles to the eye, then leave. Never explained. Never beat him. I named him “Wikipede”

See, we played the 1986 game.  We know what happened.  Samus can’t fool us by adding exciting stuff to the story.  Calling Zero Mission a remake of the original is like calling a BLT sandwich a remake of a pig.

That brings up the questions as to how far developers need to go when doing a remake.  Honestly, the 1986 Metroid only really had two flaws with it: lack of an in-game map and the need to camp out in front of pipes for hours until enough monsters popped out to refill your energy tanks.  Except for these things slowing the game considerably, I wouldn’t change a thing about it.  According to Wikipedia, Nintendo “enhanced” the re-make to play more like Super Metroid.  Pardon me, but if we want a game to feel more Metroid-ey, shouldn’t we remake the later games to feel more like the original?

Still, Zero Mission improved upon the original gameplay in a number of ways.  For starters, they give you a map, and they designed each area to look distinct from the rest.  I always felt like navigating the 1986 planet Zebes had a difficulty curve akin to looking for a bathroom in the metro when all the signs are written in Chinese.  Furthermore, the extra items available do allow for more abilities, giving more control to the player, and video games mean very little without control. 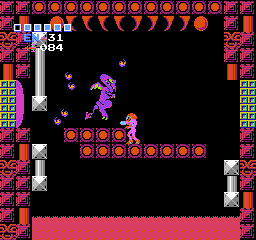 It would almost help to think of Zero Mission as a reboot rather than a remake.  The game does resemble Super Metroid and Metroid Fusion, and while I did get occasionally get stuck expecting the same sequence of events as the 1986 game, it actually does a pretty good job of forcing and guiding the player in the right direction.  I also enjoyed the addition of the quasi-animated cut scenes.

I didn’t as much care for the bonus level, however.  After defeating Mother Brain, Samus escapes the obligatory time bomb (shout out to Mother Brain, the original number one Load-Bearing Boss) only to be shot down.  She crashes on Zebes, which somehow robs her of the large metal suit strapped to her body, and all the gizmos and gadgets that went with it.  She’s left with her skin-tight blue body suit and a pistol that will stun most enemies if you let it charge up between shots.  She somehow reasons that she should embark upon a forced stealth mission through the space pirates’ mothership to regain her suit and steal an enemy ship.

While forced stealth may have actually worked in Batman: Arkham Asylum, it detracts from the point of Metroid.  Batman lives for stealth.  Arkham Asylum gives the player neat ninja-like options for sneaking around and mixes it with a healthy amount of beating the shit out of bad guys.  Metroid, however, relies on action and tool using.  When you strip that away from Samus, all you have left is a metaphorical form-fitting blue body suit which leaves nothing in the gameplay to the imagination.  Sneak sneak sneak.  Don’t fight the badguys.  Did they see you?  Well, you can run away or die.  I know game makers feel obliged to deliver more hours of gameplay than they used to, but sometimes the padding just reaches the point of absurdity.  The map of the mothership, if you compare it to the map for the rest of the game, has about as much tunneling as half of the entire planet Zebes.  Since you get your suit back halfway through it, that means that you have to crawl, sneak, dodge, and flee your way through an area about one quarter the size of the rest of the game.

Then when you get the suit, it powers up to let you use the space jump, plasma beam, and you get power bombs shortly afterwards, and the rest of the level (again, about 1/4 of the size of the main planet) consists of powering through enemies who crumble like flies under your god-like might.  The game becomes too easy, and it stays too easy for too long.

I’d probably have no doubts about the game, but this final level throws me off.  I could easily suggest Zero Mission.  If you play with the mind frame that the game uses similar areas and items as the 1986 Metroid, but expands greatly on the world, then it becomes like Super Metroid; entirely new, but charmingly familiar.  However, the bonus level introduced boredom and tedium as a prerequisite for actually finishing the game.  While I may not condemn the game merely for that, I would like to end my post today with a letter to the Powers That Be:Dear Game Makers,
Forced stealth sucks.  No one likes it.  Stop using it.
Sincerely, Everyone