When you wish upon a copyright infringement lawsuit…

Let’s have a quick word about how to increase endgame difficulty.  You want the game to feel more challenging near the end.  That way it works toward a climax, following a natural plot arc.  Some games do this better than others.  For instance, some bosses fight with status attacks.  Others will introduce bosses as random enemy encounters.  Valkyrie Profile II demanded I use the level 64 character they introduce for the final battle when even the easy enemies can vaporize all my level 90 characters like a meteor entering the earth’s atmosphere. Still, most games will bump up the level or stats of endgame enemies to give them a slight edge over the player.

However, raising the enemies’ evade rates doesn’t accomplish this as much as the Shining Force developers seemed to think it did.  Watching characters swipe the air like an epileptic in a dance club feels less exciting than, say, going outside and slashing bushes with foam pool noodles or watering your lawn with a water pistol.  This contributes to slowing the pace of a tactics game in which most battles start with bottlenecking your characters or putting them so far from the enemies that, if they worked together, they could measure the speed of light.

Not that they would do that, mind you, because like many mill-ground fantasy stories, Shining Force weighs itself down with themes like “Light is good” and “Dark is bad.”  The game opens with the formulaic war-between-two-countries-with-a-supernatural-threat-looming-vaguely-on-the-horizon.  The rival military general shows up looking like he dumped a life-size Wooly Willy set over his head and kills the king.  On his deathbed, the King gives you the order to form the Shining Force and defeat the darkness.  Light good.  Dark bad.  The enemy leader calls himself Darksol and he plans to resurrect the ancient Dark Dragon (who is neither dark, nor a dragon).

Would I be asking too much for a well-written fantasy story that doesn’t draw morally unconflicted characters in a black-and-white scenario?  I thought about rewriting that last sentence to get around using the phrase “black-and-white.”  Why do we have to associate black and white with evil and good?  I don’t know about anyone else, but I find a bit of darkness rather pleasant when I’m trying to sleep, or sneak up on a ninja or get dressed in a room full of people.  A little more subtle conflict might make a more interesting story.  In fact, for most of the game I turned off the music (which didn’t prevent it from echoing in my head like The Master’s drums) and listened to a Jim Butcher audiobook in order to get a good fantasy story. The bulk of the plot just involves moving from one excuse to start a battle to the next.  In fact, at one point, after fighting a hoard of monsters outside of a town, the man at the gate casually remarks, “Sorry about that.  We thought you were someone else,” at which point I just tip my hat, wish him good morning, and waltz on by as though I’m not headed to a priest to resurrect my comrades murdered as a casualty of mistaken identity. 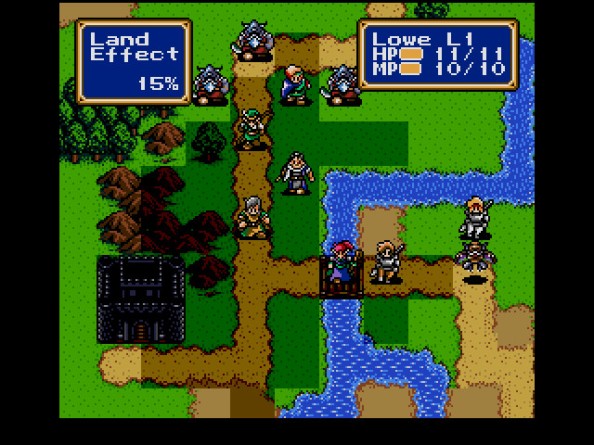 While it seems like they wrote the story in as much time as it took to look up a formula and transcribe it into the game, Shining Force does have strong points.  The game centers on battles–and when I say “centers,” it also rights, lefts, ups and downs on it too.  Don’t expect side quests or even random enemy encounters–all battles are programmed and static–but the strategy aspect makes up for the minimalist approach to this RPG.  I enjoyed FF Tactics more than many of Final Fantasy’s main-series installments, and Shining Force feels like a somewhat simplified version of Tactics.  Battles take place on a grid map, characters have different classes that affect their stats and the range of attacks, and while they can’t switch between them like FFT’s job system allowed, they can receive a “promotion” to a slightly better class once they reach level 10.

I can also praise the game for allowing the player to keep any exp they earned in battles they lost.  I can’t tell you how many times I’ve taken an unexpected turn for the worst, then realized “I haven’t saved in an hour!”  Those moments make me acutely aware that time only moves in one direction, and that I’ve wasted hours careening toward death in front of the TV with nothing to show for it.  Shining Force, however, lets you stay at your new level, making the next round a little easier.  Although they probably included this to let players level-up in a game with no random encounters, I’d appreciate seeing this feature more often in RPGs.

While I appreciate the fast pace after playing some interminably slow Zelda games, I do have a complaint about the menu system, in which the player flips through single options box-by-box, resurrecting characters one at a time, transferring single items from character to character, purchasing and equipping items one-by-one, and needing to open a new menu and flip through all the options each time.  With Final Fantasy V already on the shelves for a full year, you’d think some of the programmers would figure out, “Wow! RPG menus don’t have to be complete shit!”

Like Final Fantasy Tactics, characters level up upon completing actions in battle, which again I mostly support.  However it leads to a common problem of healers never leveling up because they don’t act as much as any of the other characters.  Another option to gain experience might help.  At least in FF Tactics I could bounce rocks off my comrades’ heads until I had enough MP and JP to learn support spells.  Shining Force doesn’t give even that much.  I went into the final battle without effective cure spells because my healer was less than half the level of some of my other characters.

But don’t let the flaws get in the way of enjoying the game.  I made it through in about a week and a half, never feeling like the pacing dropped much, and only encountering minor frustration at whiffle battling enemies with high evade rates.  I finished the game feeling I enjoyed it very much, and look forward to the sequel.  Which I won’t play right away. Maybe some shorter games first.

Until this point in the game, they called him “Kane”

A few notes before I leave, Shining Force has also been published for the Game Boy Advance, although it has a new subtitle, “Rise of the Dark Dragon.”  While I didn’t play that version, word on the net says they improved the translation massively and may have resolved some of the plot vacancies I mentioned earlier.